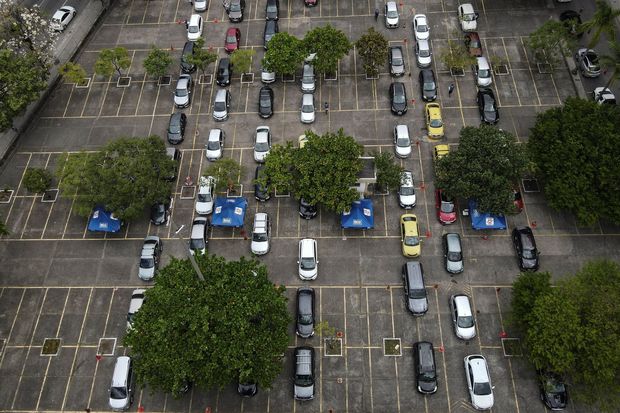 SÃO PAULO—As an aggressive coronavirus strain from the Amazon ravages Brazil, a preliminary study has provided the first evidence that the country’s principal vaccine, China’s CoronaVac, might not be as effective against it.

The small-scale study, which has yet to be peer-reviewed, comes as doctors warn of a humanitarian catastrophe in Brazil over coming weeks, with surging deaths as the disease overwhelms hospitals across the country.

Researchers from Brazil, the U.K., and the U.S., found that plasma from eight people vaccinated five months ago with CoronaVac “failed to efficiently neutralize” the new Amazonian strain, called P.1. The study didn’t show if CoronaVac can still stop people getting sick from the variant, one of the main goals of vaccination campaigns.

While the study’s sample size was small and requires further testing, the fact that all eight samples produced the same result is a “notable phenomenon,” suggesting CoronaVac is less capable of thwarting infections of P.1 than of versions of the virus previously found in Brazil, said William de Souza, of the University of São Paulo in Ribeirão Prêto, one the study’s authors.

Sinovac, the Chinese firm that produces CoronaVac, didn’t respond to requests for comment. In an interview with state-backed broadcaster CGTN that Sinovac released this week, Chief Executive Officer Yin Weidong said that, if necessary, it would take less time to develop a vaccine for the variants than from scratch.

“It’s like there’s this thief whom we’ve already caught,” he said. “Even if it’s mutating, we can totally use the current research and production capacity to effectively develop a vaccine for the new variant.”

Mr. Weidong said in the interview that Sinovac had found a person’s antibodies drop half a year after vaccination with CoronaVac, adding that the firm was still researching how long protection lasts and would release this data soon. He said the firm also is looking into the effectiveness of offering additional booster shots.

As the P.1 strain has spread rapidly across Brazil and more than 20 other countries, concerns have grown over how well existing Covid-19 vaccines will work against the variant and the many others emerging in Latin America’s biggest country.

CoronaVac, which is expected to be rolled out across much of Latin America and other developing countries in Africa and Asia, is Brazil’s best hope of vanquishing the pandemic in the short-term, public-health specialists said.

The disease has killed more than 260,000 people in Brazil. While other countries across the world have put the worst of the pandemic behind them, public-health specialists say Brazil is facing its darkest days yet, with its daily death toll expected to surpass that of the U.S. and reach a new peak in coming weeks.

“This is going to be the biggest humanitarian tragedy in Brazil’s history,” Edinho Silva, the mayor of Araraquara, a hard-hit town in São Paulo state, warned this week. A recent study showed more than 90% of the Covid-19 patients in Araraquara’s packed hospitals tested positive for the P.1 strain.

The variant, which first emerged in the Amazonian city of Manaus late last year, is 1.4 to 2.2 times as contagious as versions of the virus previously found in Brazil, and 25% to 61% more capable of reinfecting people, according to a recent study.

Its effects are already being felt across the country. Hospitals in most states have either already run out of ICU beds or are operating at nearly full-capacity, while oxygen shortages recently led to scores of patients suffocating to death in the Amazon. Prosecutors have investigated reports that intubated patients in the region were tied to their beds following a shortage of sedatives.

Public-health specialists said Brazil now faces a race against time to vaccinate its population before other potentially aggressive new Covid-19 variants emerge. Researchers estimate there are already hundreds of strains of the disease circulating in the country, although P.1 is widely believed to be the most worrying.

After President Jair Bolsonaro spent months playing down the pandemic and bungling a vaccine-supply deal with Pfizer Inc. last year, the country has largely relied on CoronaVac since kicking off its immunization campaign in January. The Chinese vaccine, which has been developed in partnership with São Paulo state, accounts for more than 70% of Covid-19 shots administered in Brazil.

Despite having an efficacy rate of around 50%, one of the lowest rates for any existing Covid-19 vaccine, CoronaVac prevented 100% of moderate and severe cases of the disease, late-stage clinical trials in Brazil showed.

The P.1 study published March 1 which also relied on researchers from the University of Oxford and Washington University School of Medicine, provides the first indications of how CoronaVac might respond to P.1.

However, infectious-disease specialists including the study authors have warned that other wider studies would need to be carried out to show how well CoronaVac works against new variants and if it can still prevent people from getting sick from P.1.

The study itself wasn’t designed to test CoronaVac specifically, but to test how antibodies created either by vaccination or by previous infections from other versions of Covid-19 respond when faced with the new P.1 strain.

“It’s an exploratory study, a flashing yellow light, but not a red one,” said Carlos Fortaleza, an epidemiologist at São Paulo State University, who wasn’t involved in the study. “Preliminary results have to be released with much care,” he said.

Some scientists have expressed concern that such studies may dissuade people from getting vaccinated with CoronaVac, which has been heavily criticized by the president himself.

Mr. Bolsonaro, a fierce China critic, told his supporters late last year that CoronaVac could cause them to die or suffer disabilities, without providing any evidence. He has instead championed the antimalaria drug hydroxychloroquine, and more recently the use of an experimental nasal spray to treat Covid-19 patients.

Public-health specialists have largely blamed Mr. Bolsonaro’s administration for the country’s surging death toll. While many state governors have imposed restrictions to keep Brazilians at home, the president has encouraged people to break those rules and rallied against face masks.

“Stop fussing and whining,” Mr. Bolsonaro, a fiery former army captain, said this week, in what some pundits said was also an attempt to divert press attention away from a growing corruption scandal involving his son. “How long are you going to keep crying about it?”

—Chao Deng in Taipei contributed to this article.

Write to Samantha Pearson at samantha.pearson@wsj.com and Luciana Magalhaes at Luciana.Magalhaes@wsj.com

Pope Francis spoke to the faithful from his study overlooking St. Peter’s Square on Sunday, the first time he had done so in just over a month.“I’ll … END_OF_DOCUMENT_TOKEN_TO_BE_REPLACED

LONDON — Seeking to salve an old wound at a time of sorrow for Britain’s royal family, the political leader of the Irish republican movement … END_OF_DOCUMENT_TOKEN_TO_BE_REPLACED

Just before the bobcat attacked, the quiet subdivision where Happy and Kristi Wade live in Burgaw, N.C., was the very picture of suburban … END_OF_DOCUMENT_TOKEN_TO_BE_REPLACED