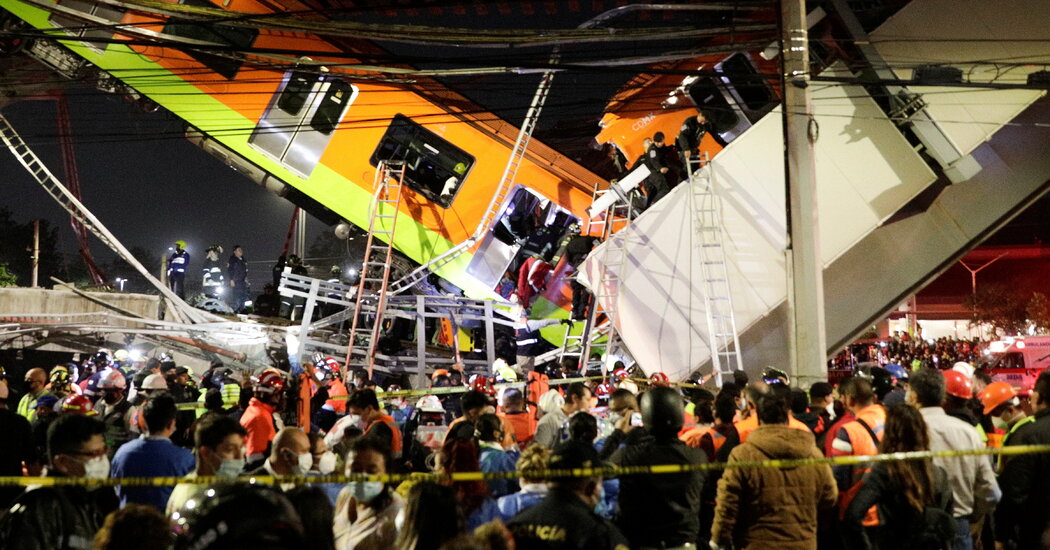 A subway train derailed on Monday night in Mexico City after a concrete overpass partially collapsed, the government said, leading to reports of scores of injuries and scenes of tangled wires, twisted metal and tilted train cars that had fallen off an overpass.

The derailment occurred on Line 12 of the subway system at the Olivos Station in southeast Mexico City, Mexico’s civil protection agency said in a post on Twitter. The accident sent emergency teams scrambling to the scene and prompted a warning on Twitter from the Mexico City Metro, officially called Sistema de Transporte Colectivo, to avoid the area.

Videos of the derailment released by the government showed at least one orange-and-yellow one subway car hanging from an overpass.

reported that the crash occurred about 10:25 p.m. and left at least 50 people injured. Officials did not immediately release any reports of casualties.

said on Twitter that she was rushing to the scene.

The subway system in Mexico City, the country’s sprawling capital, handles more than four million passengers a day. It is the second-largest in the Americas, after the one in New York City.

If you’ve ever dreamed of a quiet life on a boat in Alaska, this new waterfront listing can help you realize that vision.Of course, there's always … END_OF_DOCUMENT_TOKEN_TO_BE_REPLACED