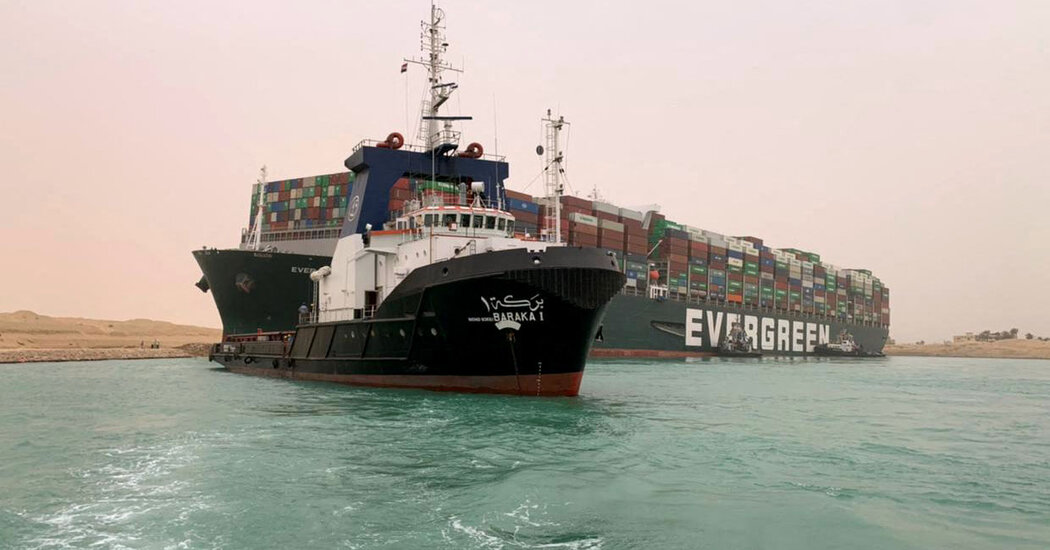 CAIRO — An enormous container ship became stuck while traversing the Suez Canal late Tuesday, blocking traffic through one of the world’s most important shipping arteries and threatening to add one more burden to a global shipping industry already battered by the coronavirus pandemic.

The ship, which was heading from China to the port of Rotterdam in the Netherlands, ran aground amid poor visibility and high winds from a sandstorm that struck much of northern Egypt this week, according to George Safwat, a spokesman for the authority that oversees the canal. The storm caused an “inability to direct the ship,” he said in a statement.

By Wednesday morning, more than 100 ships were stuck at each end of the canal, which connects the Red Sea to the Mediterranean and carries roughly 10 percent of worldwide shipping traffic.

Dozens of tugboats raced to try and wrench it free as crews on the land brought heavy equipment to dig out the land where it sat wedged.

The Suez Canal is a key artery for oil flows from the Persian Gulf region to Europe and North America. Roughly 5 percent of globally traded crude oil and 10 percent of refined petroleum products passed through the canal before the pandemic, estimated David Fyfe, chief economist at Argus Media, a market research firm.

After the canal was snarled, there was a 2.85 percent jump in the price of Brent crude, the international benchmark, on Wednesday to $62.52 a barrel.

But Mr. Fyfe said that because the demand for oil remained relatively weak amid the pandemic, a short-term outage is unlikely to have a lasting impact on the market.

“I don’t think this is going to fundamentally change market sentiment,” he said. “A lot will depend on how quickly they can get the vessel cleared.”

Chief Covelli said Mr. Crimo planned the shooting for several weeks, but that the authorities had not yet established what his motive was. “We have no … END_OF_DOCUMENT_TOKEN_TO_BE_REPLACED

Kevin McKenzie and Martine van Hamel were standing in the dining room of their weekend house in Woodstock, N.Y., trying to figure out when they got … END_OF_DOCUMENT_TOKEN_TO_BE_REPLACED