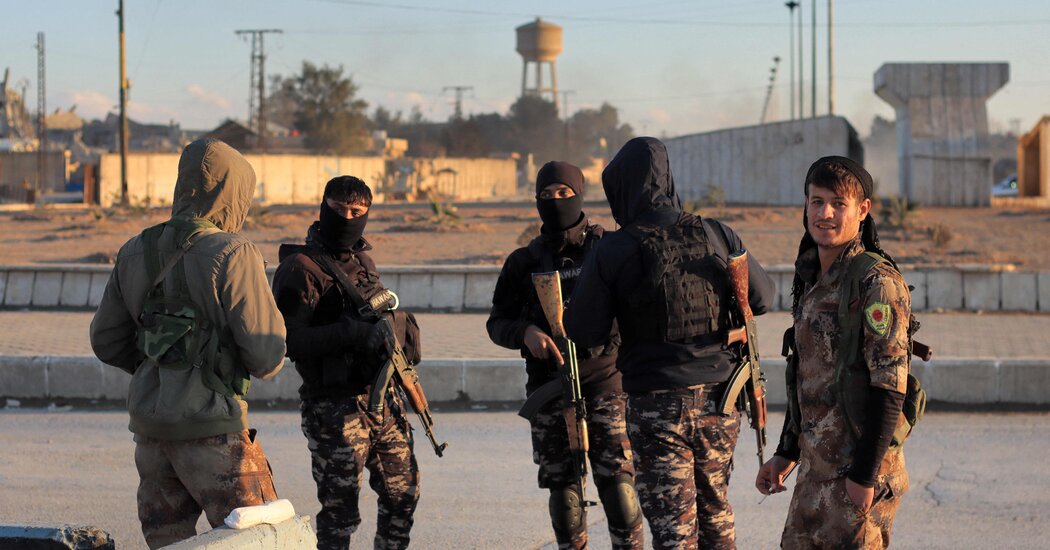 The prison at the center of the fighting in northeastern Syria was never meant to be a prison.

Built years ago as a training institute, the complex was taken over by the Kurdish-led militia that partnered with the United States and other nations to fight the Islamic State.

As the jihadists’ so-called caliphate collapsed several years ago and its fighters were captured, that militia, known as the Syrian Democratic Forces, fortified the Sinaa prison in the city of Hasaka with higher walls, heavy metal doors and bars and put its captives there.

They have been there, and in other makeshift lockups in the area, ever since because nobody knows what to do with them.

Many of the approximately 3,500 men at the prison were fighters and some have lingering injuries. Reflecting the international draw of the Islamic State, they hail from all over the world, and most of their countries have refused to take them back. A separate part of the compound holds about 700 boys, who are the children of suspected members of ISIS and were also taken captive as the caliphate collapsed.

The Kurdish-led officials who govern the area have said it is not their job to put the men on trial, and since no one else will either, the prisoners have been stuck in limbo — that is until Islamic State fighters attacked the compound on Thursday to try to break them out. They used suicide bombers to blow open the gates and seized control of about a quarter of the facility.

Terrorism experts and U.S. officials have warned of the dangers of keeping so many former ISIS fighters in an unstable region under the control of an ad hoc administration that lacks the resources to keep the place secure.

This week’s fighting only amplified those concerns.

As of Tuesday, at least 30 S.D.F. fighters had been killed in battles in and around the prison along with about 200 ISIS attackers and detainees, said Farhad Shami, an S.D.F. spokesman.

It is unclear how many prisoners have managed to escape. And S.D.F. officials have said the ISIS fighters holed up in part of the prison are using the boys as human shields.

During a visit to the prison in 2019, reporters for The New York Times saw hundreds of men, many of them emaciated and injured, dressed in orange jumpsuits and crammed into crowded cells. Those interviewed either denied they had been with the Islamic State or claimed to have had nonviolent jobs as teachers or cooks.

Human rights organizations have criticized Western governments for not repatriating their citizens from northeastern Syria, comparing their indefinite detention without trial to the plight of men held in the U.S. detention center in Guantánamo Bay, Cuba.

In addition to the men held in prisons, tens of thousands of others, mostly women and children, who were detained as the caliphate collapsed, are held in camps nearby that aid groups have warned are unsanitary and serve as jihadist recruitment centers.

AUSTIN, Texas--(BUSINESS WIRE)--As the first multifamily management company to be recognized in the Public Relations and Marketing Excellence Awards, … END_OF_DOCUMENT_TOKEN_TO_BE_REPLACED

There have been whispers of cooling housing and rental prices in the San Francisco Bay Area, but that hasn't yet translated into practical, noticeable … END_OF_DOCUMENT_TOKEN_TO_BE_REPLACED

Cars pass in Independence Square at twilight in Kyiv, Ukraine, Monday, Oct. 31, 2022. Rolling ... [+] blackouts are increasing across Ukraine as the … END_OF_DOCUMENT_TOKEN_TO_BE_REPLACED