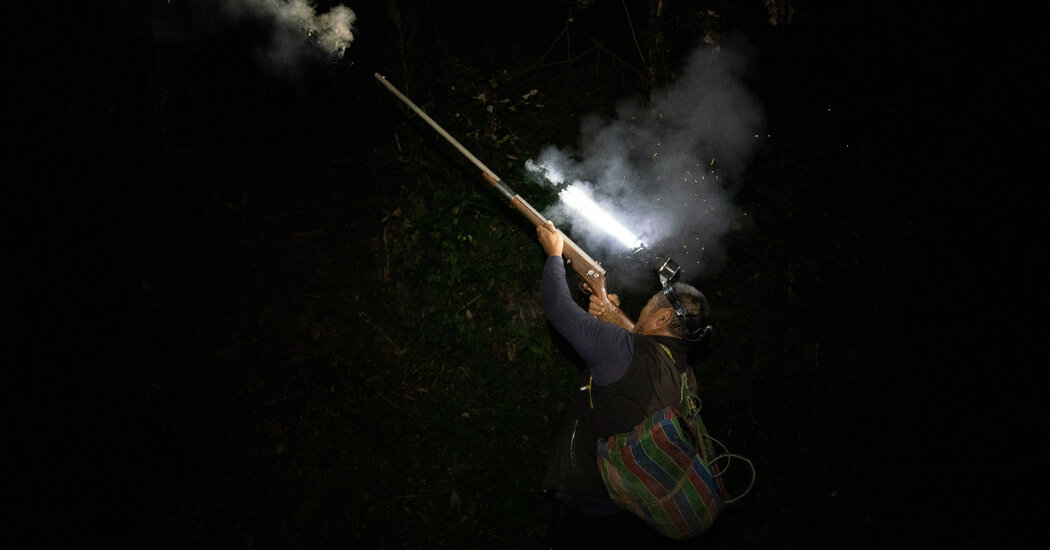 ZHUOXI, Taiwan — The smell of damp earth filled the air on a recent moonless evening as the hunter wove through the dense mountain thicket, clutching a homemade rifle and with only the narrow white beam of a headlamp to illuminate his prey.

But the hunter, Vilian Istasipal, was confident. He knew this terrain well.

A member of the Bunun, one of 16 officially recognized Indigenous groups in Taiwan, Mr. Vilian, 70, has been hunting on this land for more than 60 years.

Some of his earliest memories growing up in Zhuoxi, a town of around 6,000 people in eastern Taiwan, involved going on dayslong hunts with his father deep into the mountains where he learned skills considered essential to being a Bunun man, like how to lay a trap, shoot a flying squirrel and skin a boar.

“We kill them, but we also pay respect to their lives,” Mr. Vilian said in the courtyard of his home in Zhuoxi, also known as Takkei in the Bunun language.

formally apologized to the island’s Indigenous people for centuries of “pain and mistreatment,” the first leader to do so.

Awi Mona, a professor and expert on Indigenous law at National Dong Hwa University in the eastern city of Hualien. “What we are actually discussing is the Indigenous right to self-government on natural resources.”

Hunting has always been a central part of Taiwan’s Indigenous culture. In Taiwan’s verdant East Rift Valley, the Bunun people maintained the practice even after they were forced out of their traditional mountain homes in the 1930s by the colonial Japanese government.

Many Bunun resettled in the foothills in towns like Zhuoxi, nestled among neatly tended millet and rice fields and scattered with papaya trees and pink bougainvillea.

Then, as now, Indigenous hunting culture was circumscribed by a complex web of taboos and rituals. Traditionally, only men can hunt. Among the Bunun, flatulence and sneezing are some of the many bad omens that might lead a man to call off a hunt. Same goes if a hunter has a bad dream.

In Bunun culture, hunting female deer in the spring, when they are likely to be pregnant, is off-limits. Hunting black bears, seen as friends, is also discouraged.

Among other groups, like the Seediq and the Truku, hunting culture is similarly restricted by long-held customs, at the heart of which is a belief in the fundamental balance between man and nature.

“When I see an animal, I feel that I’m destined to meet it,” said AlangTakisvilainan, 28, a Bunun hunter. He drew a distinction with hunting in America, where the use of semiautomatic rifles effectively amounted to bullying the animals, he said.

“That humans and animals can go head-to-head in a fair fight,” he said, “I think that’s an incredible thing.”

While only Indigenous people can use guns to hunt, they are barred from killing protected species like leopard cats and Formosan black bears, and are required to use certain types of traps, knives or old-fashioned homemade rifles that can jam easily and are some times unsafe. The simple firearms are modeled after those used long ago by Indigenous hunters and must be loaded with gunpowder before each shot.

They must also apply for permits, a process which includes answering questions some hunters regard as absurd. Asking what animals a hunter plans to target, for example, is considered an insult to the Indigenous belief that the animals are gifts from ancestors.

Although enforcement of the laws has been uneven, arrests have continued over the years. So just to be safe, Bayan Tanapima, 62, said he was applying for a gun permit even though he had been hunting since he was a teenager.

“It’s very strange — we have lived for so long in the mountains so why do we have to do this?” Mr. Bayan said. “It’s like they don’t approve of the Indigenous way of living.”

Conservationists have argued that loosening such restrictions would be ruinous for the environment and wildlife, and animal-rights advocates decry what they consider cruel practices. But defenders of local hunting traditions note that Indigenous people have been caretakers of Taiwan’s environment for thousands of years and that such expertise should be respected.

Ciang Isbabanal, a police officer who works on Indigenous issues in the nearby town of Yuli, said that while hunting laws were necessary to curb extreme behavior, the cultural taboos on hunting were so deeply rooted that close outside supervision was unnecessary.

“I hope the country can respect their culture and give them space to live freely,” said Mr. Ciang, a Bunun who also hunts when off-duty. “Having too many legal constraints doesn’t work.”

Back in the forest on a recent night, Mr. Vilian, the 70-year-old hunter, strode up the mountain to where he knew there’d be trees heavy with just-ripened olives — a favorite snack of deer and boars.

Mr. Vilian found a small boar writhing in a trap. According to tribal customs, it was too young to be killed just yet.

After wrapping it in his shirt, he headed home to a late-night feast of braised bamboo shoots and deer meat soup.

But before they could dig in, the ancestors needed to be thanked. Mr. Vilian, his son, Qaivang, and Mr. Bayan, his cousin, dipped their fingers in a bowl of rice wine. They sprinkled a few drops on the boar — now flailing in a rusty cage. The boar was later given to a relative to raise for several years.

“Today we are very happy,” the men chanted in the Bunun language. “To our ancestors and mountain gods, we thank you for giving us this food.”

AUSTIN, Texas--(BUSINESS WIRE)--As the first multifamily management company to be recognized in the Public Relations and Marketing Excellence Awards, … END_OF_DOCUMENT_TOKEN_TO_BE_REPLACED

There have been whispers of cooling housing and rental prices in the San Francisco Bay Area, but that hasn't yet translated into practical, noticeable … END_OF_DOCUMENT_TOKEN_TO_BE_REPLACED

Cars pass in Independence Square at twilight in Kyiv, Ukraine, Monday, Oct. 31, 2022. Rolling ... [+] blackouts are increasing across Ukraine as the … END_OF_DOCUMENT_TOKEN_TO_BE_REPLACED