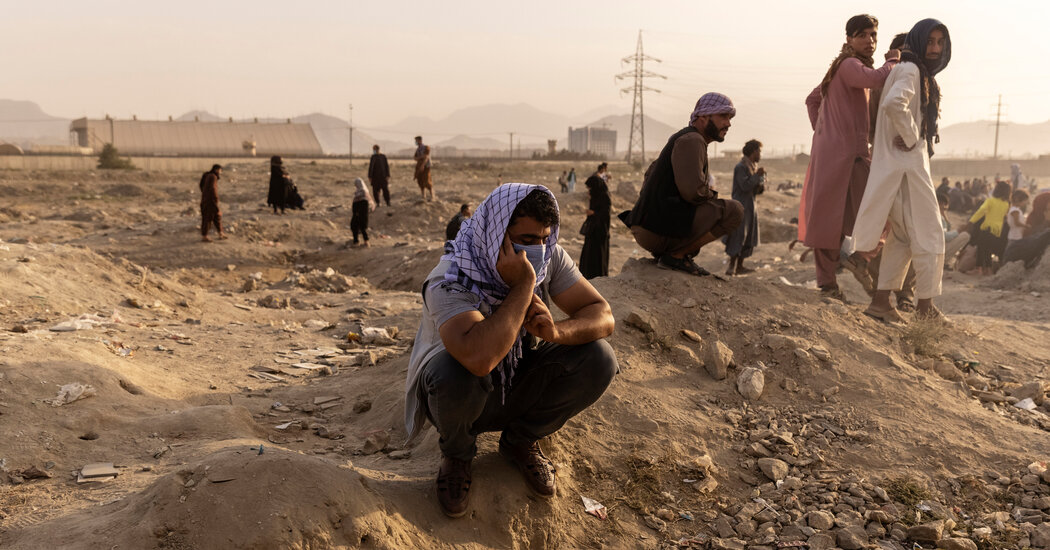 As a desperate U.S. effort to evacuate Americans from Afghanistan gained momentum on Monday, Taliban leaders rejected a suggestion from President Biden that American forces might remain past an Aug. 31 deadline to complete the operation, injecting fresh urgency into an already frantic process.

American officials are increasingly worried that even with the vast number of Afghans, Americans and people of other nationalities evacuated in recent days — a total of about 10,400 people in the 24 hours from Sunday to Monday alone, according to the White House — many still remain to be rescued. In recent days, that operation has increasingly focused on the Americans still left, over the Afghans who worked with the United States.

On Monday, a State Department official said that some former Afghan military interpreters or other close U.S. allies, a designated priority group for evacuations, were being turned away from the airport by American officials in order to give priority to U.S. passport and Green Card holders in recent days. The official was not authorized to brief the press, and spoke on condition of anonymity.

The official’s account was supported by interviews with Afghans who have approached the airport in recent days, and with American veterans’ groups and other organizations that have tried to organize evacuations for interpreters and other Afghans at risk from the Taliban.

the capital fell to the Taliban.

talks daily with his Taliban counterparts regarding security measures at the airport.

Other American officers down the military chain of command in Kabul have also engaged with Taliban commanders on specific security and threat reduction issues, the officials said.

The regular discussions between American and Taliban commanders yielded an agreement in which Taliban fighters expanded the security perimeter outside the airport, pushing back the enormous crowds of Afghans and others seeking access to flights out.

The Taliban have also continued to hold talks in Kabul with former Afghan leaders — one of whom, former President Hamid Karzai, abruptly vacated his state-owned residence after the Taliban had disarmed his guards and took over security of his compound, Afghan officials said.

Taliban leaders also met with hundreds of Afghan imams and religious school administrators in Kabul to begin the group’s directions for education and morality. No women could be seen at the gathering.

Around other areas of Kabul on Monday, residents described a calm that was partly welcome but mostly eerie. Dozens of residents said they were trying to stay home as much as possible out of fear and uncertainty about what might trigger punishment from their new Taliban rulers. Women, in particular, have scarcely been seen in the central public areas where the Taliban were present in the largest numbers, some said.

Banks, government offices and schools were all still closed around the city, and some residents said the cash shortage was growing urgent.

“People have money in the bank, but they can’t cash it out. And the people can’t borrow because no one has cash,” said Rahmatullah, a journalist in Kabul who asked only to be identified by a single name out of fear of the Taliban.

Grocery stores were still largely open, he said, but prices for some staples had gone up sharply, increasing the misery.

Biden administration officials say they are still unable to give an exact number of Americans left in Afghanistan, no less of Afghan interpreters still waiting to be evacuated.

Jake Sullivan, President Biden’s national security adviser, said on CNN’s “State of the Union” on Sunday that the United States had been in touch with “a few thousand Americans” and was working on making arrangements to get them out of the country.

In Kabul, Afghans who worked for the U.S. government and secured Special Immigrant Visas said they had received emails from the State Department in recent days asking them to come to the airport for evacuation.

“We’re telling people to be prepared to survive up to a day in the scrum” outside the airport, said Matt Zeller, a former C.I.A. officer on the Afghanistan desk, who founded No One Left Behind to help his former Afghan colleagues escape the country. “They make it inside only to be turned back.”

Mr. Zeller is one of many U.S. veterans who have mobilized to help their former Afghan colleagues get out of the country. On Sunday night, Mr. Zeller said, veterans and contacts in Afghanistan organized an operation to bring to the airport some 500 S.I.V. holders who were considered at high risk of Taliban reprisals. They were able to get the Afghans inside the airport, he said, but were turned back at what he described as a State Department checkpoint.

On Monday evening, Mr. Zeller said, Taliban soldiers approached the Afghans outside the airport gate and separated them according to their paperwork, telling visa holders they would not be allowed to enter.

Fearing that opportunities to get their colleagues safely out of Afghanistan were tightening, the veterans working on evacuation from afar described feelings of helplessness.

“I feel a moral obligation to get these people out,” said Tripp Adams, an Army veteran who has been working on the effort. “When you’re halfway across the world and you can’t do anything — when hardened warriors are calling me and they’re cracking — this is going to destroy a generation of veterans.”

Editor’s Note: This story is part of As Equals, CNN’s ongoing series on gender inequality. For information about how the series is funded and more, … END_OF_DOCUMENT_TOKEN_TO_BE_REPLACED

IdentityForce, a service from the credit bureau TransUnion, monitors your personally identifiable information (PII) so you don’t have to do it … END_OF_DOCUMENT_TOKEN_TO_BE_REPLACED