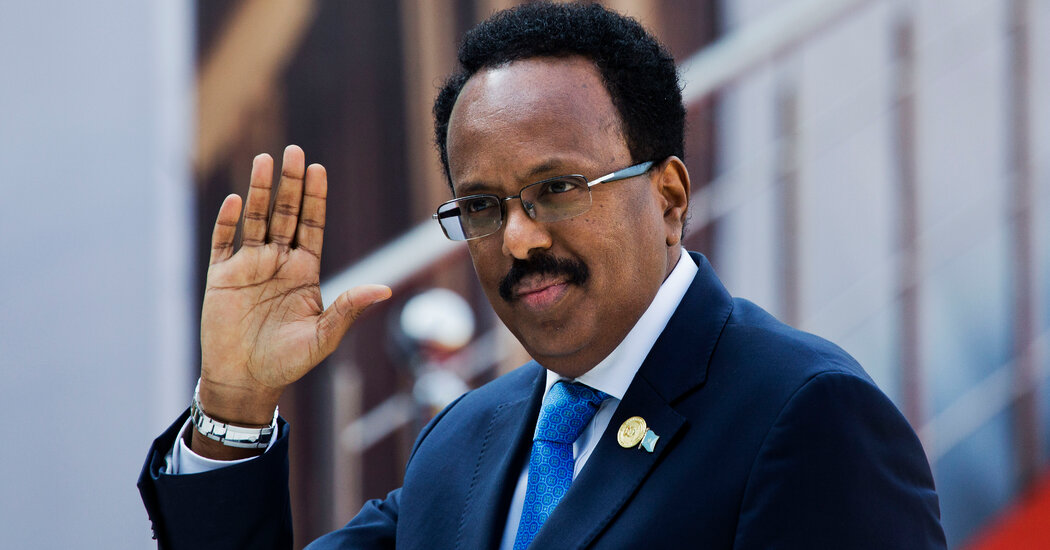 NAIROBI, Kenya — During his years as an administrator at the Department of Transportation in upstate New York, the Somali refugee turned American citizen took classes in political science, imbibing democratic values he hoped to one day export back to his homeland.

That dream came true for Mohamed Abdullahi Mohamed in 2017, when he returned to Somalia and was elected president in a surprise victory that evinced high hopes he might reform — even transform — his dysfunctional, war-weary country.

But those aspirations have crumbled since Mr. Mohamed failed to hold elections when his four-year term ended in February, then moved to extend his rule by two years — a step many Somalis viewed as a naked power grab.

A furious political dispute turned violent on Sunday when a series of gunfights broke out between rival military factions in the capital, Mogadishu, evoking fears that Somalia, after years of modest yet gradual progress, could descend into the kind of clan-based bloodshed that ripped it apart in the 1990s.

young Somalis determined to find a better future and progress in the fight against insurgents with Al Shabab, one of the world’s best organized and funded Al Qaeda affiliates.

Mr. Mohamed did not respond to a request for an interview or to questions sent to his aides.

Popularly known as “Farmaajo” — a derivation of the Italian word for cheese and purportedly his father’s favorite food — Mr. Mohamed was once the bearer of many Somalis’ hopes.

Mr. Mohamed was widely seen as less corrupt, more reform-oriented and less manipulated by foreign interests than the other 24 candidates.

“This is the beginning of unity for the Somali nation,” Mr. Mohamed told supporters shortly after winning the election.

Mr. Mohamed came to the United States in 1985 as a junior diplomat at the Somali Embassy and, as his country tumbled into conflict, decided to stay. A family friend said he first applied for political asylum in Canada, where his mother and siblings lived, and later obtained a Canadian passport.

But in the early 1990s, Mr. Mohamed, newly married, moved back to the United States where his family eventually settled in Grand Island, next to Buffalo and Niagara Falls.

back at his desk at the Department of Transportation in Buffalo, where he enforced nondiscrimination and affirmative action policies.

The great hopes many Somalis invested in Mr. Mohamed in 2017, when he won the presidency against all expectations, stemmed partly from his public image as a calm and bespectacled, if somewhat uncharismatic, technocrat. But disappointment soon set in.

Mr. Yasin, a former journalist with Al Jazeera, had become a conduit for unofficial Qatari funds that were used to help get Mr. Mohamed elected, and which he used to solidify his political base while in power, the officials said — part of a wider proxy battle for influence between rival oil-wealthy Persian Gulf states in the strategically located country.

Some in Mr. Mohamed’s inner circle, including Colonel Sheikh, grew disillusioned and quit. “I said to myself: ‘These people are bad news,’” he said.

In 2019, Mr. Mohamed gave up his American citizenship. He didn’t explain the decision, but officials familiar with the matter pointed to one possible factor.

At the time Mr. Mohamed surrendered his passport, his finances had come under investigation by the Internal Revenue Service in the United States, said three Western officials familiar with the matter, speaking on the condition of anonymity to discuss a sensitive matter about a foreign head of state.

cutting ties with neighboring Kenya in December as part of a long-running diplomatic dispute.

allying with the autocratic president of Eritrea, Isaias Afwerki, whose military has trained thousands of Somali troops, Western and Somali officials say.

“It comes as cash and it’s uncounted,” Abdirizak Mohamed, a former interior minister and now opposition lawmaker, said of the Qatari funds. “It’s an open secret.”

Now Mr. Mohamed is confined to Villa Somalia, the presidential compound in central Mogadishu, as military units loyal to his most powerful opponents — a coalition of presidential candidates and the leaders of two of Somalia’s five regional states — camp on a major junction a few hundred yards away.

Worried residents say they don’t know whether the president’s latest concession will offer a genuine opportunity for new talks, or a pause before rival fighters open fire again.

“I feel a lot of fear,” said Zahra Qorane Omar, a community organizer, by phone from Mogadishu. “We’ve gone through enough suffering. The bullet is not what this city or its people deserve.”

MIAMI--(BUSINESS WIRE)--Intelli Smart Homes, the leading smart home technology company, has been recognized as one of America’s fastest-growing … END_OF_DOCUMENT_TOKEN_TO_BE_REPLACED

Customers outside a Walmart store in Torrance, California, US, on Sunday, May 15, 2022. Walmart Inc. is scheduled to release earnings figures on May … END_OF_DOCUMENT_TOKEN_TO_BE_REPLACED

The past few years have been brutal on homebuyers' budgets. Would-be buyers have been priced out of some of the most desirable neighborhoods thanks to … END_OF_DOCUMENT_TOKEN_TO_BE_REPLACED