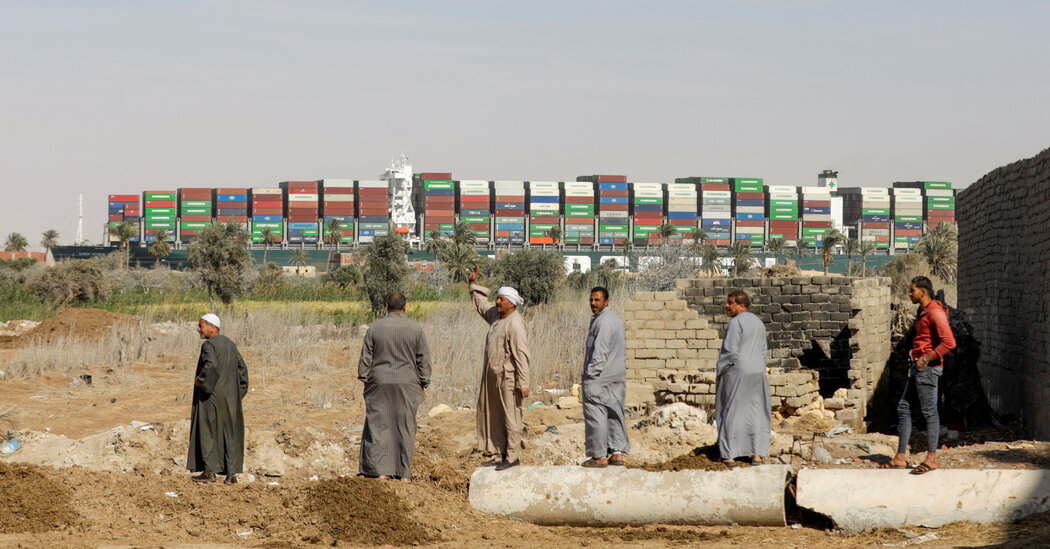 After almost a week of dredging, drigging and tugging — and with some help from the moon — salvage teams yesterday freed the giant container ship that had been stuck in the Suez Canal, one of the world’s most important shipping lanes.

As a result, traffic has resumed for the hundreds of ships waiting on both ends of the canal. And while estimates have varied wildly, the delay is also expensive. “The disruption has caused the canal authorities in Egypt losses of $95 million in revenue,” The Times’s Peter Goodman told me.

And even though the ship is free, the disruption isn’t over.

“It’s not just like flipping a switch,” Vivian Yee, the Times’s Cairo bureau chief, told me. Now that the ship is out of the way, the backlog will take at least a few days, maybe even weeks, to resolve.

High winds from a sandstorm caused the ship, the Ever Given, to turn sideways in the canal and get stuck, its operators said. But shipping experts have suggested that while the wind probably had a role in the crisis, human error might have, too.

few extra inches of tidal flow and gave workers the boost they needed to set the ship free.

Not a normal ship

It’s rare that a maritime disruption makes international news. But this was not your average mishap. For one, the Suez Canal isn’t like other waterways. “It is a vital channel linking the factories of Asia to the affluent customers of Europe, as well as a major conduit for oil,” Peter writes.

And the Ever Given is one of the world’s biggest container ships. “From a distance, it’s hard to comprehend how big it is,” Vivian told us. “From land, all the containers on top look like Legos — and then you realize each one of those Legos is 20 or 40 feet long.”

a backlog of goods sitting in factories, waiting to be put in boxes, Vivian says.

It took 10 years of hard labor — during which tens of thousands of Egyptian workers died — to build the canal in the 19th century.

For more: This is how giant container ships are built.

After the Jan. 6 attack on the Capitol, does the U.S. need a domestic terrorism law?

Makeover: The beauty industry has entered a phase of total pop-culture domination. Celebrities, social media stars and lifestyle influencers are changing the way the sell works.

Lives Lived: A fierce advocate for New York’s disabled, Edith Prentiss fought to make the city she loved more navigable for everyone. She died at 69.

suffered more during the pandemic than most other U.S. restaurants.

Their business began declining sooner — in January of last year, when news broke that a new virus was circulating in Wuhan, China. The restaurants have also had to cope with a rise in anti-Asian racism — “vandalized, robbed, attacked online in racist Yelp reviews,” as The Washington Post reported. Xi’an Famous Foods in New York began closing early after two employees were punched in the face while commuting to and from work.

Grace Young, a decorated author of cookbooks, is worried that traditional Chinatowns, like New York’s and San Francisco’s, will never recover from the pandemic, and she has spent months trying to call attention to the problem. “When you step into those restaurants, you are stepping back in time, and it’s a privilege,” Young said on a recent episode of “The Splendid Table,” a food podcast.

For anyone who wants to help Chinese restaurants, Francis Lam, the host of “The Splendid Table,” offered a suggestion: “If you can, order yourself some Chinese takeout. Get extra. Leftovers are your friend.” In The Times, Bonnie Tsui has more tips for supporting restaurants. — David Leonhardt

creamy asparagus pasta to the next level.

Young artists are bypassing art schools and student loans, quitting their day jobs and pursuing careers as full-time artists on TikTok. But what happens when viewership plummets and copycats arrive?

The poshest place in California's Coachella Valley is The Madison Club. This exclusive gated community in La Quinta is where A-listers and tycoons … END_OF_DOCUMENT_TOKEN_TO_BE_REPLACED

KOROPY, Ukraine — Four men tugged at long strips of fabric to lift a coffin out of the gaping hole in the backyard of a small house. They flung the … END_OF_DOCUMENT_TOKEN_TO_BE_REPLACED