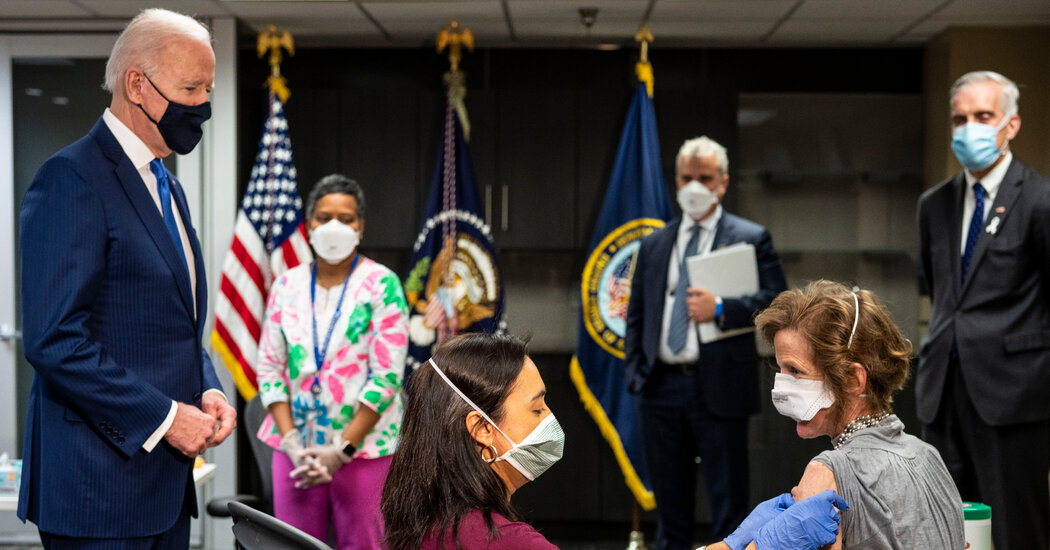 When President Biden pledged last week to amass enough shots by late May to inoculate every American adult, the pronouncement was greeted as a triumphant acceleration of a vaccination campaign that seemed only weeks earlier to be faltering.

And it is true that production of two of the three federally authorized vaccines has sped up in part because of the demands and directives of the new president’s coronavirus team.

But the announcement was also a triumph of another kind: public relations. Because Mr. Biden had tamped down expectations early, the quicker vaccine production timetable conjured an image of a White House running on all cylinders and leaving its predecessor’s efforts in the dust.

A closer look at the ramp-up announced last week offers a more mixed picture, one in which the new administration expanded and bulked up a vaccine production effort whose key elements were in place when Mr. Biden took over for President Donald J. Trump. Both administrations deserve credit, although neither wants to grant much to the other.

Mr. Biden will announce that he intends to secure an additional 100 million doses of the Johnson & Johnson single-shot vaccine by the end of this year, with the goal of having enough on hand to vaccinate children and, if necessary, administer booster doses or reformulate the vaccine to combat emerging variants of the virus.

At the same time, Mr. Biden benefited hugely from the waves of vaccine production that the Trump administration had set in motion. As both Pfizer and Moderna found their manufacturing footing, they were able to double and triple the outputs from their factories.

Mr. Biden had been in office less than a month when Moderna announced that it could deliver 200 million doses by the end of May, a month earlier than scheduled, simply because it had become faster at production. Pfizer was able to shave off even more time, moving up the timetable to deliver its 200 million doses by a full two months, partly because of newfound efficiencies and partly because it was given credit for six doses per vial instead of five.

All this enabled Mr. Biden to announce that his administration would have enough doses in hand by the end of May to cover all 257 million adults, two months earlier than he had promised just a few weeks earlier.

“They criticize what we did, but they are using our playbook every step of the way,” said Paul Mango, the Trump administration’s deputy chief of staff for health policy and a senior official in the vaccine production effort then known as Operation Warp Speed. He said Mr. Trump’s team oversaw the construction or expansion of nearly two dozen plants involved in vaccine production and invoked the Defense Production Act 18 times to ensure those factories had sufficient supplies.

Beyond the nuts and bolts of production, the Biden White House has pursued a starkly different messaging campaign than Mr. Trump’s: underpromise, and then try to overdeliver. Mr. Trump routinely boasted of imminent achievements, including a vaccine rollout before Election Day, only to fall short.

Carefully calibrated goals “avoid losses,” said David Axelrod, the senior strategist for President Barack Obama’s campaigns in 2008 and 2012. The Biden administration, he added, “must have learned that lesson from watching Trump.”

An affordable center-chimney Colonial in Glastonbury, CT, is the oldest property to hit the market this week on Realtor.com®.Offered at a steep … END_OF_DOCUMENT_TOKEN_TO_BE_REPLACED

Nissan was one of the early pioneers of the electric car. The Leaf has now sold over 600,000 units worldwide since its launch in 2011 and is still … END_OF_DOCUMENT_TOKEN_TO_BE_REPLACED

RUDNE, Ukraine — Yurii Brukhal, an electrician by trade, didn’t have a very dangerous role when he volunteered for Ukraine’s territorial defense … END_OF_DOCUMENT_TOKEN_TO_BE_REPLACED