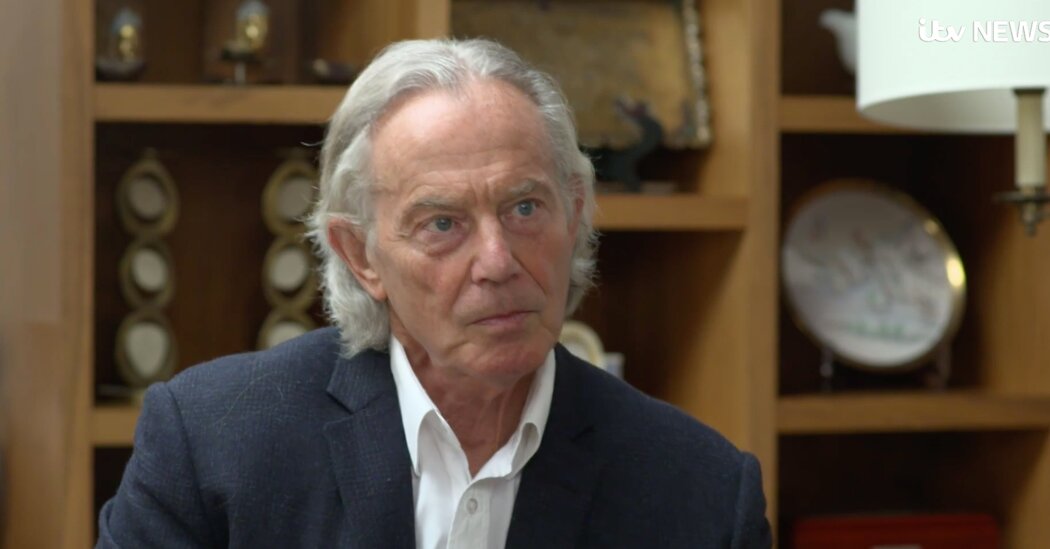 What is it with male politicians and their hair these days? After decades — centuries — of nondescript short cuts, their crowning glory has suddenly turned into a form of creative expression. And source of controversy.

It often seemed as if no one could top Donald Trump’s incredibly complicated cream puff of a construction — until Boris Johnson, with his signature flyaway platinum locks (the ones that he uses to distract, amuse, disarm and otherwise manipulate those around him), arrived at 10 Downing Street as Britain’s prime minister.

But then, earlier this week in an ITV television interview, a former prime minister one-upped them both.

Or rather Tony Blair’s long, flowing gray hair did. There hasn’t been a former member of the league of NATO nations who let it all down like that since President Lyndon Baines Johnson.

Dr. Who to “the possessed Vigo painting in Ghostbusters.”

The Evening Standard he had not had such long hair since his days in a rock band known as the Ugly Rumours at Oxford University. Which raises all sorts of questions about his later-in-life desire to relive them.

Beyond that, long hair also evokes the Bible, not to mention Moses (and any other number of Old Testament prophets). Also, it connects to Gandalf the Gray and magicians of his ilk, as well as Albert Einstein and the myth of the mad genius scientist too busy experimenting with electricity to deal with a combover.

Also poets, though their long flowing hair tends to not be gray, at least in the collective imagination.

What we do not associate with long hair: former world leaders.

Indeed, what Mr. Blair’s hair shows as much as anything is the unspoken public assumption that once our leaders leave the highest office in whatever land, they will remain frozen as they were at that moment, preserved in amber and memories just as they were when they steered the ship of state. Even if they were relatively young while at the helm.

That way, when they re-emerge as elder statesmen every once in a while to bestow their hard-earned wisdom on the world, their authority is recognizable. Sure, we know they may be getting on with their lives as private citizens, but they aren’t supposed to flaunt it. It makes them seem inconsistent. (Remember the hoo-ha around Hillary Clinton’s first lady hair cuts?) Unreliable.

As Mr. Blair apparently knows. He later told the Standard he was heading to a barber “imminently.”

MIAMI--(BUSINESS WIRE)--Intelli Smart Homes, the leading smart home technology company, has been recognized as one of America’s fastest-growing … END_OF_DOCUMENT_TOKEN_TO_BE_REPLACED

Customers outside a Walmart store in Torrance, California, US, on Sunday, May 15, 2022. Walmart Inc. is scheduled to release earnings figures on May … END_OF_DOCUMENT_TOKEN_TO_BE_REPLACED

The past few years have been brutal on homebuyers' budgets. Would-be buyers have been priced out of some of the most desirable neighborhoods thanks to … END_OF_DOCUMENT_TOKEN_TO_BE_REPLACED