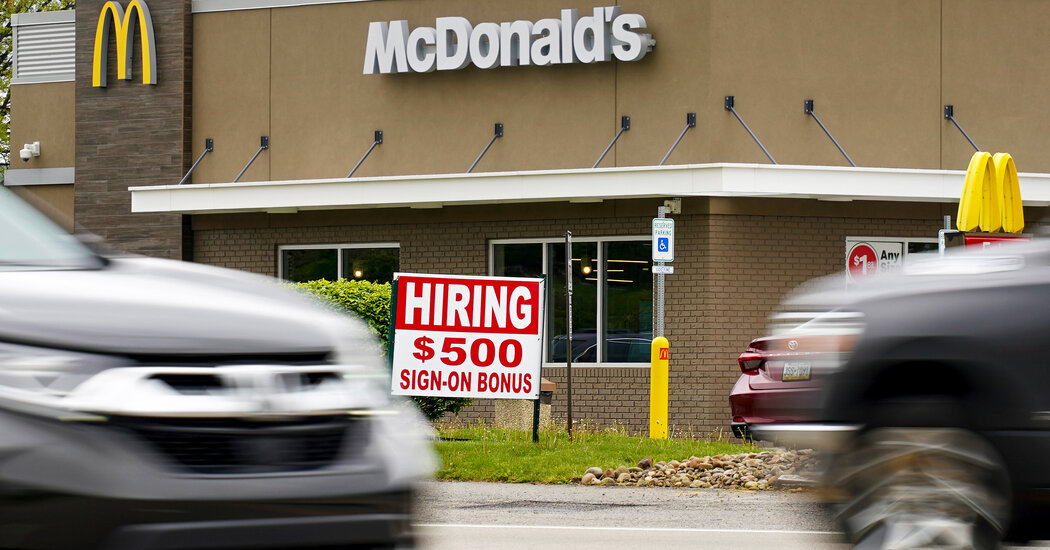 The chief executive of Domino’s Pizza has complained that the company can’t hire enough drivers. Lyft and Uber claim to have a similar problem. A McDonald’s franchise in Florida offered $50 to anybody willing to show up for an interview. And some fast-food outlets have hung signs in their windows saying, “No one wants to work anymore.”

The idea that the United States suffers from a labor shortage is fast becoming conventional wisdom. But before you accept the idea, it’s worth taking a few minutes to think it through.

Once you do, you may realize that the labor shortage is more myth than reality.

Let’s start with some basic economics. The U.S. is a capitalist country, and one of the beauties of capitalism is its mechanism for dealing with shortages. In a communist system, people must wait in long lines when there is more demand than supply for an item. That’s an actual shortage. In a capitalist economy, however, there is a ready solution.

The company or person providing the item raises its price. Doing so causes other providers to see an opportunity for profit and enter the market, increasing supply. To take a hypothetical example, a shortage of baguettes in a town will lead to higher prices, which will in turn cause more local bakeries to begin making their own baguettes (and also cause some families to choose other forms of starch). Suddenly, the baguette shortage is no more.

solve the problem by offering to pay a higher price for that labor — also known as higher wages. More workers will then enter the labor market. Suddenly, the labor shortage will be no more.

a lot of evidence to suggest that the U.S. economy does not suffer from that problem.

If anything, wages today are historically low. They have been growing slowly for decades for every income group other than the affluent. As a share of gross domestic product, worker compensation is lower than at any point in the second half of the 20th century. Two main causes are corporate consolidation and shrinking labor unions, which together have given employers more workplace power and employees less of it.

has declined in recent decades. The country now has the equivalent of a large group of bakeries that are not making baguettes but would do so if it were more lucrative — a pool of would-be workers, sitting on the sidelines of the labor market.

Corporate profits, on the other hand, have been rising rapidly and now make up a larger share of G.D.P. than in previous decades. As a result, most companies can afford to respond to a growing economy by raising wages and continuing to make profits, albeit perhaps not the unusually generous profits they have been enjoying.

announced Tuesday that it would raise its minimum hourly wage to $25 and insist that contractors pay at least $15 an hour. Other companies that have recently announced pay increases include Amazon, Chipotle, Costco, McDonald’s, Walmart, J.P. Morgan Chase and Sheetz convenience stores.

Why the continuing complaints about a labor shortage, then?

They are not totally misguided. For one thing, some Americans appear to have temporarily dropped out of the labor force because of Covid-19. Some high-skill industries may also be suffering from a true lack of qualified workers, and some small businesses may not be able to absorb higher wages. Finally, there is a rollicking partisan debate about whether expanded jobless benefits during the pandemic have caused workers to opt out.

For now, some combination of these forces — together with a rebounding economy — has created the impression of labor shortages. But companies have an easy way to solve the problem: Pay more.

That so many are complaining about the situation is not a sign that something is wrong with the American economy. It is a sign that corporate executives have grown so accustomed to a low-wage economy that many believe anything else is unnatural.

Up in the air: A kite-building tutorial that doubles as a meditative experience.

Too big: Why this Nobel laureate economist has soured on Big Tech.

A Times classic: See what kids around the world eat for breakfast.

Lives Lived: Lee Evans was one of several Black athletes who threatened to boycott the 1968 Summer Olympics. Instead, he smashed two world records and raised his fist at the medal ceremony. Evans died at 74.

Flamin’ Hot Cheetos to executives. The spicy puffs were a huge success, and Montañez worked his way up the company’s ranks to become an executive himself.

It’s the kind of inspiring story made for a biopic — one that the actress Eva Longoria is set to direct. And yet, the details may not be entirely true, according to an investigation by The Los Angeles Times.

While Montañez did make valuable contributions to Frito-Lay, the company stated that he did not create Flamin’ Hot Cheetos. Lynne Greenfeld, an employee at Frito-Lay’s corporate office, did. “That doesn’t mean we don’t celebrate Richard, but the facts do not support the urban legend,” Frito-Lay said.

Montañez has disputed Frito-Lay’s claims, with some support from another executive, and said his low job status explained the lack of documentation of his role. “I wasn’t a supervisor, I was the least of the least,” Montañez told Variety. He retired from the company in 2019.

As for the movie, Frito-Lay told its producers about the story discrepancies in 2019. “I think enough of the story is true,” Lewis Colick, a screenwriter for the project, recently said. “The heart and soul and spirit of the story is true. He is a guy who should remain the face of Flamin’ Hot Cheetos.” — Sanam Yar, a Morning writer

this recipe features greens, beans and a Parmesan crust.

P.S. The Times’s Andrew Ross Sorkin will host an event at 1:30 p.m. E.T. today with Dame Ellen MacArthur about how to reduce our carbon footprint. R.S.V.P. here.

Today’s episode of “The Daily” is about Joe Biden and Benjamin Netanyahu. On the Modern Love podcast, a man returns to the orphanage he tried to forget.

SAN FRANCISCO — Cleve Jones has lived in the Castro neighborhood for nearly 50 years, almost from the day he graduated from high school in Phoenix and … END_OF_DOCUMENT_TOKEN_TO_BE_REPLACED

A home inspection can spare you from unpleasant surprises after you buy. After crunching the numbers, searching your favorite neighborhoods, and … END_OF_DOCUMENT_TOKEN_TO_BE_REPLACED