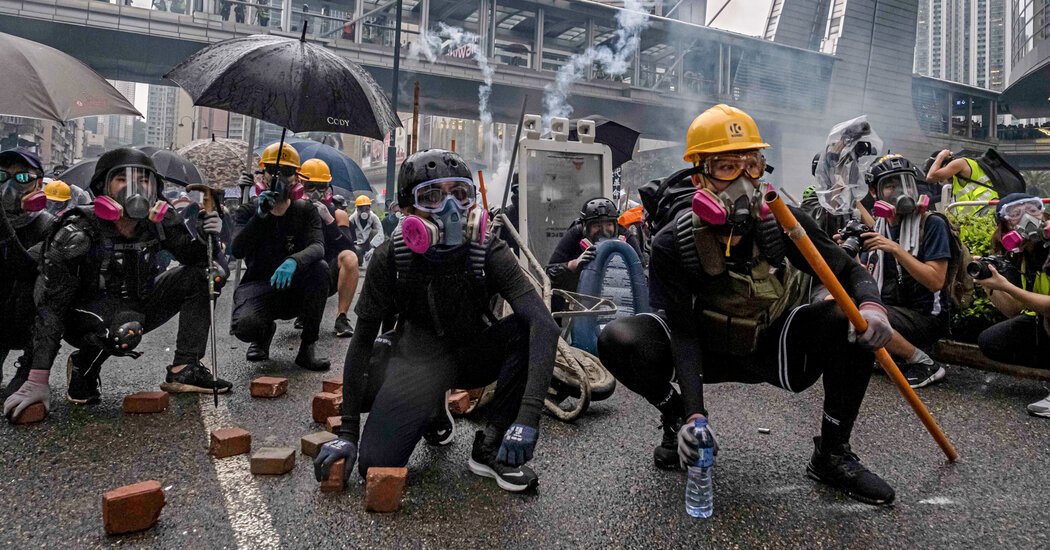 Want to get The Morning by email? Here’s the sign-up.

It’s one of the world’s most consequential stories, yet one often overshadowed by the pandemic. This morning, I’m focusing on Hong Kong, with help from my colleague Vivian Wang, who’s based there. Our exchange follows.

David: Britain handed over control of Hong Kong to China almost 25 years ago, and there has long been a pro-democracy movement there. Why did Xi Jinping and the rest of China’s leadership decide to act now?

Vivian: The short answer is the enormous antigovernment protest movement in 2019, in response to a government proposal that would have allowed extraditions to mainland China.

previous protest movements had lasted a few months, at most. This time, there was huge support, and it wasn’t dying down on its own.

Officials in Beijing also hated that foreign politicians, like those in the U.S., were so vocal in support of the protesters. Beijing is really worried that Hong Kong could be a base for foreign powers to try to topple the Chinese government.

From Beijing’s perspective, has the crackdown worked? And has it created any problems for the central government?

In many ways, it has absolutely worked. There are no more street protests. There’s extensive self-censorship. Virtually every prominent pro-democracy activist is in exile, in jail, awaiting trial or has disappeared from public life.

But there’s a lot of simmering anger among Hong Kongers, even if they don’t dare express it publicly anymore. They still shop at stores and restaurants they think support the democracy movement. That’s why we see Beijing continuing to apply pressure. It clearly, and I think rightly, doesn’t think the threat is past.

imposed sanctions on Chinese and Hong Kong officials. The question is how much China cares. At the moment, it seems to think that it is ascendant enough to weather this.

I have a hard time seeing how this story ends with anything other than victory for China’s leaders and defeat for the pro-democracy movement. Do people within the movement see any reason for optimism?

Ever since the security law was enacted, the mood within the pro-democracy movement has been bleak. I expected at least some people to offer fiery defiance and remind people that there is still hope — if only just as a rallying cry, whether they believed it or not. But pretty consistently across people I talk to, the consensus is that there’s not much they can do to change the situation, at least for now.

to go abroad. And not just wealthy Hong Kongers with dual citizenships — people with no experience outside Hong Kong or who don’t speak much English are doing so, too.

China’s leaders also consider Taiwan to be part of their country. But Taiwan, unlike Hong Kong, has an independent government. How do you think Hong Kong affects Taiwan?

Many people see Beijing’s actions on Hong Kong as a harbinger of, or a laboratory for, more aggressive actions on Taiwan. It’s all part of an increasingly confident Chinese government that feels it can take these risks.

At the same time, the crackdown is likely driving public opinion in Taiwan further from Beijing. In the past, Beijing has also proposed reunification with Taiwan under a model of “one country, two systems.” Many Taiwan residents can look at Hong Kong and see how that has turned out.

For more: Edward Wong, a Times correspondent who spent nine years reporting on China and has covered Hong Kong protests, recommends two episodes of “This American Life” — “Umbrellas Up” from 2019 and “Umbrellas Down” from 2020.

The news anchor Roger Mudd was best known for his interview with Senator Edward Kennedy in 1979, when he asked a simple question: “Why do you want to be president?” Mudd died at 93.

The music that got us through the pandemic

Go through the list to discover some new music, as well as revisit a few hits.

P.S. What will your life look like after Covid? The Times wants to hear about your hopes, fears, predictions and more. Share them here.

DALLAS — The rollback of abortion rights has been received by many American women with a sense of shock and fear, and warnings about an ominous … END_OF_DOCUMENT_TOKEN_TO_BE_REPLACED

The poshest place in California's Coachella Valley is The Madison Club. This exclusive gated community in La Quinta is where A-listers and tycoons … END_OF_DOCUMENT_TOKEN_TO_BE_REPLACED