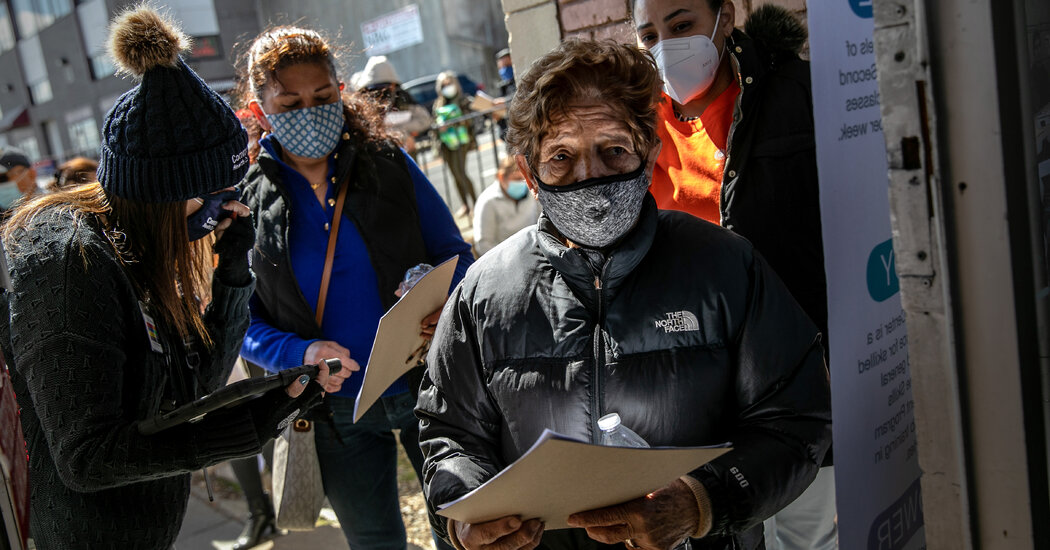 In the early weeks of Covid-19 vaccinations, the shining examples of success were all places with politically conservative leaders. Globally, the countries with the largest share of vaccinated people were Britain, Israel and the United Arab Emirates. In the U.S., the states that got off to the fastest starts were Alaska and West Virginia.

This pattern made me wonder whether many progressive-led governments were spending so much effort designing fair-seeming processes that they were failing at the most basic goal of a mass vaccination program: getting shots into arms. That error has held down vaccination rates across much of continental Europe. And it appeared to be an early problem in California and New York.

Russ Bynum of The Associated Press wrote this week.

the chaos of the Trump administration’s virus response to the Biden administration’s. Democrats’ belief in the power of government certainly doesn’t ensure they will manage it competently, but it may improve the odds.

In the most successful state programs, one theme is what you might call centralized simplicity. In Connecticut, Gov. Ned Lamont gave priority to older residents, including people in their 50s, rather than creating an intricate list of medical conditions and job categories that qualified people for shots (and that more privileged families often figure out how to game).

In New Mexico — which has the country’s highest rate of fully vaccinated people, despite also having a high poverty rate — Gov. Michelle Lujan Grisham has overseen the creation of a centralized sign-up system. The state has one vaccine portal that all residents can use to sign up for shots, rather than the piecemeal, confusing systems in many other states, my colleague Simon Romero reports from Albuquerque.

South Dakota, the red state with the highest share of vaccinated residents, has also taken a centralized approach, NPR’s Ailsa Chang points out.

polls show. But it is still notably high among registered Republicans.

CNN’s Harry Enten writes, “while the reverse is true in the states with high vaccination rates.”

Dr. Vernon Rayford, an internal medicine doctor in Tupelo, Miss., told The Times that he had noticed a difference in the sources of skepticism. White skeptics often express a general distrust of government. Black skeptics are particularly mistrustful of the medical system, which has a long history of giving them substandard care — and even outright harmful treatments.

Across much of Mississippi — the state with the smallest share of residents to have received a shot — vaccine appointments are going unfilled largely because of a lack of demand. Two big reasons for the skepticism, Dr. Brian Castrucci, a public health expert, told The Times’s Andrew Jacobs, are misinformation on social media and mixed messages from Republican governors about the urgency of vaccination.

Vaccine rates still are not high enough — in any state — to have ended the pandemic. In Connecticut and New Mexico, combined, about 11 people have died on a typical recent day. But that toll has fallen more than 80 percent since mid-January, even more than in the rest of the country.

declined to testify in his trial over the killing of George Floyd. Both sides will make closing arguments on Monday.

Can Biden be as transformative as Franklin Roosevelt?

Lives Lived: Carol Prisant was a 51-year-old former antiques dealer with no journalism experience when she decided she wanted to work for the magazine The World of Interiors. She went on to an illustrious three-decade career. Prisant died at 82.

will be buried tomorrow in England. The ceremony will be limited to 30 people and will have “minimal fuss,” according to the BBC, which will televise the funeral.

AUSTIN, Texas--(BUSINESS WIRE)--As the first multifamily management company to be recognized in the Public Relations and Marketing Excellence Awards, … END_OF_DOCUMENT_TOKEN_TO_BE_REPLACED

There have been whispers of cooling housing and rental prices in the San Francisco Bay Area, but that hasn't yet translated into practical, noticeable … END_OF_DOCUMENT_TOKEN_TO_BE_REPLACED

Cars pass in Independence Square at twilight in Kyiv, Ukraine, Monday, Oct. 31, 2022. Rolling ... [+] blackouts are increasing across Ukraine as the … END_OF_DOCUMENT_TOKEN_TO_BE_REPLACED