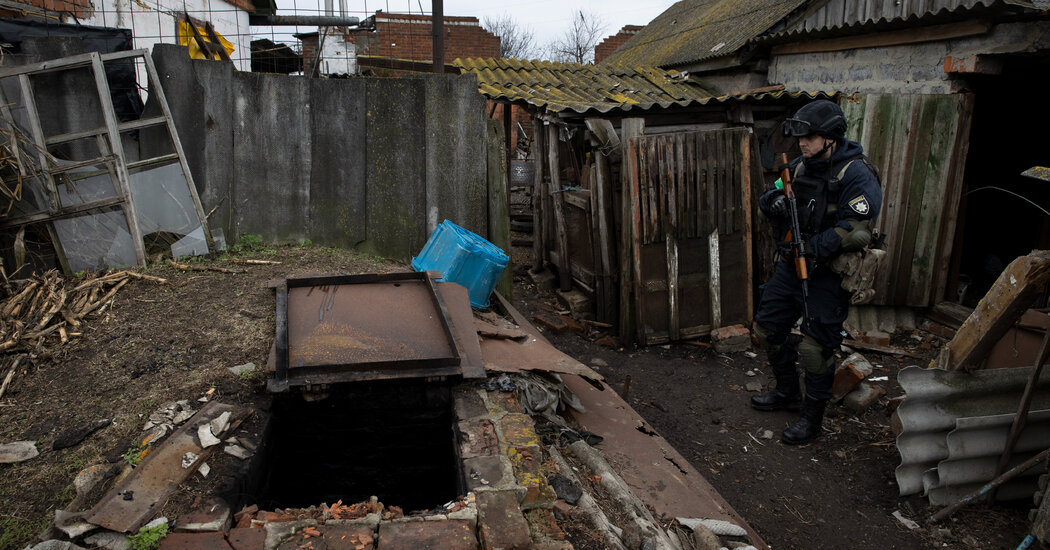 In a Russian-occupied village, five men went off to feed cattle. Their relatives and neighbors are wondering what happened to them.

Russian soldiers had occupied this remote village in eastern Ukraine for about two weeks and were using a farm as a base. But the animals at the farm hadn’t been fed. Their incessant bleating was wearing on both occupiers and townspeople.

A group of five residents from Husarivka, an unassuming agricultural village of around 1,000 people, went to tend the cattle.

They were never heard from again.

“My two nephews disappeared. They went to feed the cows on the farm,” said Svitlana Tarusyna, 70. “They are gone, vanished.”

What transpired in Husarivka has all the horrifying elements of the more widely publicized episodes involving Russian brutality: indiscriminate killings, abuse and torture taking place over the better part of a month.

considering applying for membership in the alliance. Dmitri A. Medvedev, Russia’s former president and prime minister, said Moscow would be forced to “seriously strengthen” its defenses in the Baltics if the two countries were to join.

The five men fed the cows and tended to their duties. But as they left, something on the farm exploded, residents recalled. Whether it was an artillery strike or an attempt at sabotage is unclear, but it seemed to contribute to their disappearance; Mr. Doroshenko stated that the Russians captured the men after the explosion. It is possible they were behind some type of attack on the Russian headquarters.

“They only got to the crossroad and were seized,” Mr. Doroshenko said.

Two other people near the farm also went missing that day, Mr. Doroshenko added. Roughly a week later, on March 24, a Russian sniper shot and killed Andriy Mashchenko as he rode home on his bicycle. He had been sheltering in a neighbor’s basement during an artillery barrage. He died on Peace Street.

Under heavy bombardment, the Russians retreated from Husarivka about two days later, and Ukrainian forces swept through afterward. The town’s casualty tally during the occupation: seven people missing, two killed by gunfire and at least two by shelling.

Evidence scattered around the town showed how artillery had ruled the day. Spent rockets lay in fields. Roofs were caved in. The rusted hulks of Russian vehicles were seemingly everywhere. In one armored personnel carrier, the corpse of what was presumed to be a Russian soldier remained, barely recognizable as someone’s son.

But as Ukrainian soldiers sifted through the battlefield wreckage after their victory, they found something on Petrusenko Street. It was in a backyard basement sealed shut by a rusted metal door.

“In this cellar the bodies were found,” said Olexiy, a chief investigator in the region who declined to provide his last name for security reasons. He gestured down into a soot-covered hole. “They were covered by car tires and burned,” he said.

“There is no way to tell the cause of their death,” he added, “We found three hands, two legs, three skulls.”

The bodies have yet to be identified, he said. Residents of Husarivka believe the three had been part of the group of five who disappeared. Images provided to The New York Times clearly showed that a rubber work boot was melted to the foot of one leg.

But hauntingly, no one knows for sure what happened to the five men. Many of the cows they went to feed ended up being killed by the shelling.

When the water slipped in, it was just a glimmer on the floor, a sign that it was time to go.It was Wednesday, around noon, and Darcy Bishop roused … END_OF_DOCUMENT_TOKEN_TO_BE_REPLACED

The union movement that kicked off across the country more than a year ago has continued its momentum in 2022, with workers in warehouses, coffee … END_OF_DOCUMENT_TOKEN_TO_BE_REPLACED