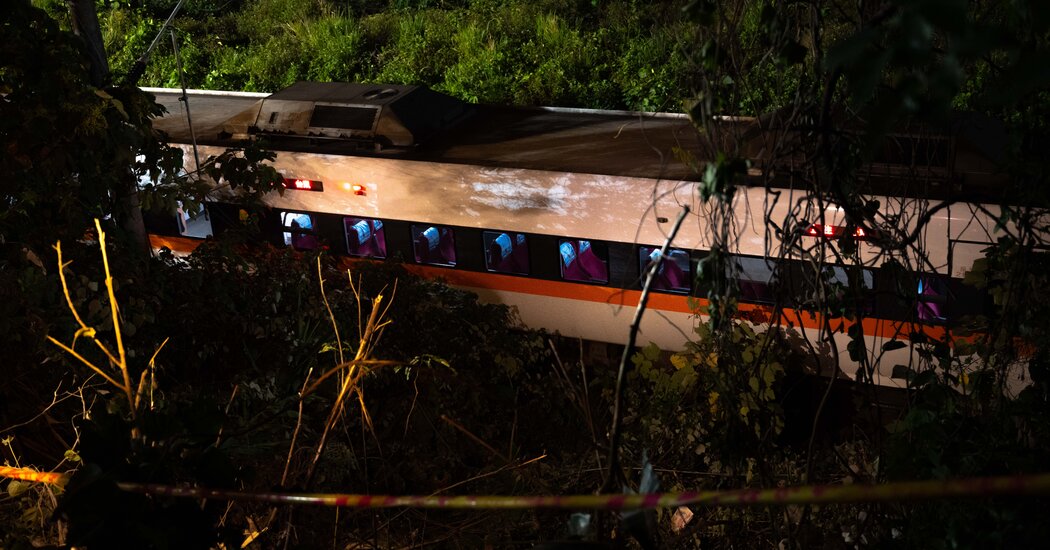 HUALIEN, Taiwan — Crawling through the smoky wreckage, she first found her husband and son pinned under luggage lockers and mangled steel, but they weren’t breathing. Then she called her daughter’s name. A faint voice responded: “I’m over here.”

Following the voice, Hana Kacaw found her daughter underneath a mass of metal train parts. She tried pulling pieces of the wreckage off, but it was no use. “Please hold on,” she urged. “Someone is coming to rescue us.’

“I can’t hang on any longer,” her daughter responded, according to Ms. Kacaw. Those were her last words.

Just like that, Ms. Kacaw had lost her husband of more than 20 years and their 21-year-old son and 20-year-old daughter, both promising athletes in college. They were among the 51 people who were killed on Friday when a train derailed along Taiwan’s east coast in the island’s worst such disaster in four decades. Others who died included the train’s two drivers, at least two young children, as well as a French national and an American.

The eight-car Taroko Express train had been nearly full, with about 490 passengers — including 120 or so who held standing-room-only tickets — on the first day of a long holiday weekend in Taiwan. The authorities say the train, which was bound for the eastern city of Taitung, probably collided with a construction vehicle that had rolled down a slope onto the track, then slammed into a tunnel.

The authorities, who have pledged a thorough investigation, said on Saturday that a suspect had been questioned and then released on bail. The government also said that it might compensate families about $190,000 for each deceased person, although it would finalize the amount later.

By Saturday, rescuers had saved all those they presumed had survived, and were using excavators to try to pull out the train cars. The casualties were the greatest in several train cars — numbered 5 to 8 — that were stuck deep inside the tunnel. Ms. Kacaw, who had been in Car 8, at the front of the train, had eventually found her way out of the tunnel on her own.

After spending a sleepless night in a hotel, she joined dozens of other grieving relatives on Saturday in the grim, painful task of identifying remains and saying their goodbyes.

They gathered at a temporary support center that had been set up under tents outside a funeral home in Hualien, a city south of the crash site. They took turns entering a morgue where bodies were being kept, and many emerged shaken and distraught. Some discussed funeral arrangements and reviewed autopsy reports, while volunteers, Christian pastors and Buddhist monks — and even President Tsai Ing-wen, briefly — offered comfort.

For some families, grief has been complicated by uncertainty. Some relatives were frustrated that they had been unable to identify their loved ones, but officials said they were hoping that DNA samples would help. The impact of the crash was so great and the destruction so severe, the officials explained, that in several train cars, rescuers could only extricate human remains in parts.

Inside these train cars, the acrid smell of blood hung in the air, said Zeng Wen-Long, a volunteer Red Cross rescue worker, in an interview. It was there, also in Car 8, that Mr. Zeng’s team found 5-year-old Yang Chi-chen, who had been traveling with her older sister and father, wedged under a chair.

More than an hour passed before the team had reached her on Friday, and she was already very weak. Mr. Zeng said he had carried her to her father, Max Yang, who was leaning against the tunnel and had called out to the rescuers, asking to hold the motionless child.

Mr. Yang, 42, said he had tried calling to her to wake her up. Several times, he said, her eyes would flutter open before closing again. “I’m sorry,” Mr. Yang told her.

By the time they got to a hospital, Mr. Yang said, Chi-chen had died. She was one of the youngest victims. Her 9-year-old sister remains in intensive care.

On Saturday, Mr. Yang returned to the site of the crash — a tunnel running through verdant mountains overlooking the Pacific Ocean — with other grieving relatives to “call back the soul,” a traditional Taoist mourning ritual typically performed for victims of an accident.

Facing the placid blue waters, the family members called out to their loved ones who had perished in the crash.

“Come home!” they yelled toward the tunnel, where workers in yellow hard hats had halted work on restoring the damaged railway track and removing the train carriages. “It’s time to go now!”

Mr. Yang said that Chi-Chen, a rambunctious girl, had been excited to spend the long holiday weekend at an ocean-themed amusement park in Hualien, known for its dolphin show.

“Yang Chi-chen, stop playing in the water now, we’re leaving!” wailed Mr. Yang, who still had a catheter in his hand and bandages on his bruised cheek. “We’re going to take the bus to have fun somewhere else!”

On a viewing platform above the other families, Ms. Kacaw, the woman who had lost her husband and two children, wept quietly as a Christian pastor led a prayer.

Both her son, Kacaw, and her daughter, Micing, had been students and track stars at the National Taiwan Sport University in Taoyuan, a city near Taipei. They were a tight-knit family and maintained a deep connection to their Indigenous ethnic group, the Amis.

Ms. Kacaw said she had enjoyed playing badminton with her daughter in their neighborhood in New Taipei City and listening to her son play the guitar. She said the children had been introverts, just like their father, Siki Takiyo, whom she described as a soft-spoken university administrator.

Now, all three of them were gone, and Ms. Kacaw’s grief was compounded by guilt as she struggled to understand how they could have died while she survived.

She said she could not stop thinking about how she had asked her children to go back to their ancestral home in eastern Taiwan. She had wanted them to see their grandparents and pay their respects at their ancestors’ graves. The children had agreed even though her daughter had a track meet and her son had been preparing for exams.

On Friday morning, the family missed the train they had originally booked. A kindly ticket seller on the platform had offered to upgrade them to the Taroko Express, which would get them there faster. On the train, she had taken a seat at the back of the first car, while her husband and children had been at the front — the part of the train that would later absorb the greatest impact.

To Ms. Kacaw, the seeming randomness of it all was unbearable.

“Why didn’t I go with them?” she asked, in tears. “Why did I ask my children to come home with me?”

After the prayer, she sat in a wheelchair, dazed, a large cotton bandage across her forehead. Tears streamed down her face as she stared out at the ocean. A light rain began to fall.

“My only wish is for them to come into my dreams tonight,” she said.

AUSTIN, Texas--(BUSINESS WIRE)--As the first multifamily management company to be recognized in the Public Relations and Marketing Excellence Awards, … END_OF_DOCUMENT_TOKEN_TO_BE_REPLACED

There have been whispers of cooling housing and rental prices in the San Francisco Bay Area, but that hasn't yet translated into practical, noticeable … END_OF_DOCUMENT_TOKEN_TO_BE_REPLACED

Cars pass in Independence Square at twilight in Kyiv, Ukraine, Monday, Oct. 31, 2022. Rolling ... [+] blackouts are increasing across Ukraine as the … END_OF_DOCUMENT_TOKEN_TO_BE_REPLACED