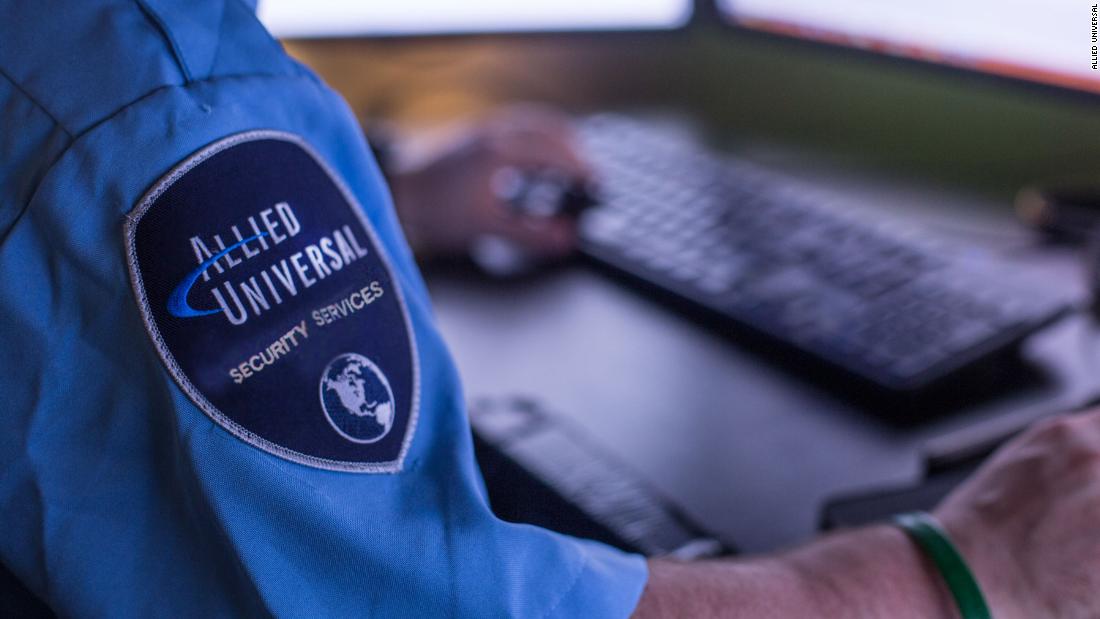 A major player in the security services industry is going on a hiring spree. Or at least, it hopes to.

Security and facility services company Allied Universal is looking to hire more than 35,000 workers in the next two months.

Despite a 6.1% unemployment rate in April and the US economy still missing more than 8 million jobs compared to February last year, filling the positions might not be an easy task.

The unemployment rate ticked up in April from 6% in March as more people reentered the labor force. And while that’s good news, some industries are still struggling to hire workers.

“I think it’s going to be challenging for certain,” said Morgan Price, senior vice president of recruiting and talent acquisition at Allied Universal. “Not only is just finding the people to come to us a challenge, but we are battling a lot of other companies that are also in the same position so it’s going to be a tight race to the candidate.”

Demand for workers has been on the rise as the economy recovers, said Nick Bunker, an economist with employment website Indeed.

Restaurant operators and manufacturers report that they have not been able to fill open positions and McDonald’s announced last week that it’s increasing wages for some staff to help attract workers.

“The labor market is tighter than you’d expect given that we are still 8 million jobs down and that is because demand is so strong,” said Bunker. “Competition to hire new workers is fairly strong…but employers are not disarmed in the situation there are ways to compete with other employers.”

This isn’t the first time Allied Universal, which provides security and facilities services to businesses, including health care facilities, retailers and corporate offices, has gone on a big hiring push: In April 2020, the company announced it was looking to fill more than 30,000 positions over the next two months, but it was unable to hit that goal as the pandemic and its economic fallout kept many workers on the sidelines.

The company has since seen demand for workers increase further, as more businesses start to re-open.

“The biggest driver of that is now that we are seeing a lot of our customers open up and get their businesses back on track, or at least try to. Their needs for security professionals and our services are also growing,” said Price.

The open positions vary and include security professionals, site supervisors, client and account managers, as well as administrative and leadership roles in human resources, finance and sales. And the openings include full- and part-time and temporary positions.

To attract candidates, the company is offering hiring bonuses in some parts of the country. Typically, they range from $1,000 to $2,000, but can be higher. For instance, in southern California and in the Phoenix area, new hires can get up to a $3,000 bonus.

“We are doing whatever we can to attract talent,” said Price.

Applicants can go through the interview process in a variety of ways, including: in-person, live video or with a pre-recorded video that allows an applicant to answer recorded questions.

“We can do it completely remote and touchless all the way through,” said Price.

During the height of the pandemic, the company also hosted drive-thru interviews where candidates stayed in their car and the interviewer stood outside.

And it’s not uncommon for applicants to get an offer right away.

“We do make on the [spot] offers once we are in the interview process we will typically not let anyone go without making an offer if they are qualified and interested,” said Price.

AUSTIN, Texas--(BUSINESS WIRE)--As the first multifamily management company to be recognized in the Public Relations and Marketing Excellence Awards, … END_OF_DOCUMENT_TOKEN_TO_BE_REPLACED

There have been whispers of cooling housing and rental prices in the San Francisco Bay Area, but that hasn't yet translated into practical, noticeable … END_OF_DOCUMENT_TOKEN_TO_BE_REPLACED

Cars pass in Independence Square at twilight in Kyiv, Ukraine, Monday, Oct. 31, 2022. Rolling ... [+] blackouts are increasing across Ukraine as the … END_OF_DOCUMENT_TOKEN_TO_BE_REPLACED