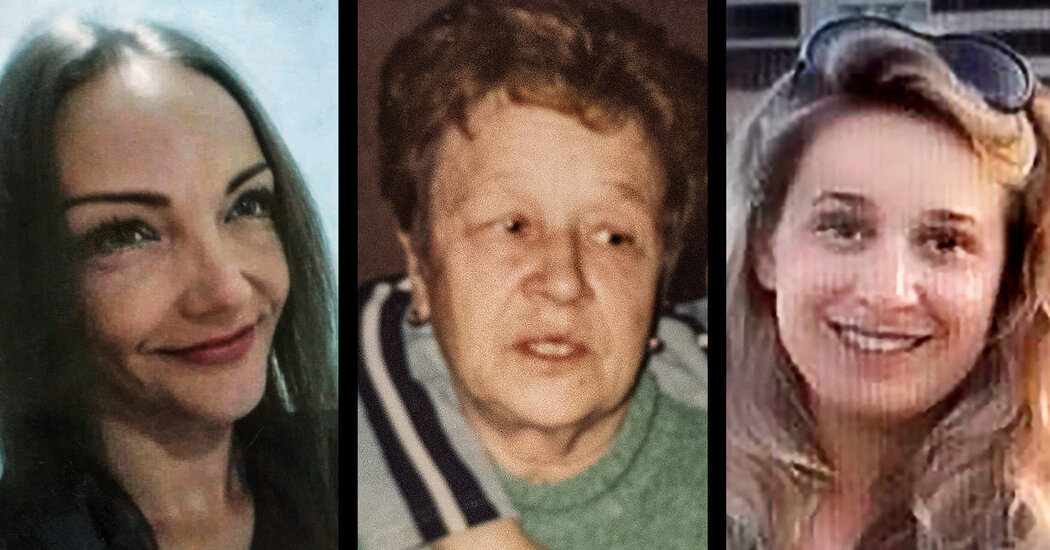 BUCHA, Ukraine — One woman was badly beaten and shot through the eye. Another, held captive by Russian soldiers, was found in a cellar, shot in the head. An 81-year-old grandmother was discovered hanging in her garden, perhaps killed, perhaps driven to suicide.

They were three victims among hundreds during the Russian occupation of Bucha in the spring. Bucha, a suburb of Ukraine’s capital, Kyiv, quickly became the main focus of atrocities by Russian soldiers before they withdrew from the area.

The crimes gained worldwide attention. But these women were unknown, their deaths unseen and unexplained.

reported at the time on the Russian brutality and came across these cases. So we went back to Bucha, the place of so many deaths, to learn about these three women — to find out about their lives and who they were.

We found that each woman, in her own way, was a fighter, struggling to survive weeks of hunger, cold, bombardment and shooting, yet tragically vulnerable to the ruthless violence of an occupying army.

Many of the circumstances of their last days remain unclear, but for their families and Ukrainian officials, there is no doubt that they were victims of Russia’s aggression against their country.

Oksana Sulyma, 34, was in Bucha only by chance.

A former public servant, she lived in Kyiv with her 5-year-old daughter, but had visited Bucha to stay with friends only 48 hours before the war began in February. Within days, Russian troops had stormed the wooded suburb and roads and transport links had been cut. Oksana was stuck, said Oleksiy, a childhood friend, who asked that only his first name be used for privacy.

She had grown up and lived much of her adult life in Bucha. Her grandmother lived in an apartment near the center of town. Oksana had moved to Kyiv only after divorcing her husband several years ago; she wanted to be closer to her parents, who helped look after her daughter.

Her mother, Larysa Sulyma, agreed to provide a few details of Oksana’s life for her to be remembered by.

“She was a very bright child,” her mother said. She learned French during an exchange visit to France, completed a degree in sociology at the National Aviation University in Kyiv, and later worked at the Ministry of Infrastructure.

“She was very vivacious,” her mother added. She shared photographs of her daughter on a beach in Crimea, where she used to vacation every year before Russia annexed the peninsula in 2014. “She loved life, she loved to travel.”

In early March, Russian troops set up bases and firing positions in Bucha and began to impose greater control on the streets. They searched houses, confiscated cellphones and began detaining people and killing.

Oksana was last seen by friends on March 10 at Shevchenko Square, her mother said. The square, marked by a statue of the Ukrainian poet Taras Shevchenko, is a popular meeting place.

Her mother posted a message on Facebook on March 15 expressing concern. Oksana had experienced mental health issues, and anxiety at the onset of the war may have exacerbated her condition, her mother wrote.

“Her behavior may have manifestations of anger, aggression or incompetence,” her post said. “If anyone knows her whereabouts, please call.”

An outing to find dog food.

Anna Noha, 36, had lived most of her life in Bucha and had no intention of leaving.

She had friends and family in the town, and even when her former partner and half sister fled the occupation in early March, she chose to stay. Anna hung out with friends in the basement of her two-story building, sometimes venturing into the streets, visiting her father and rescuing cats.

“She was very independent, very active,” said her stepmother, Tetyana Kopachova, 51. “At the same time, she was very kind, very helpful. She chopped wood all winter for me.”

Anna’s father and stepmother were dog breeders and kept 11 Central Asian sheepdogs in cages on their property in the center of town. Anna would come around to help.

Anna was also a survivor. Her former partner was abusive and she came over to their house for a couple of nights with a friend, nursing bruises, Ms. Kopachova said.

Her parents pressed her to stay, but she left again on March 13, promising to find dog food because they were running out. She never came back.

A strict grandmother, determined to stay.

Lyudmyla Shchehlova, 81, also did not want to leave Bucha. A retired epidemiologist, she had lived for almost 40 years in a cottage styled like a wood cabin, nestled amid pine trees.

The house had belonged to her husband, also a physician, and together they had raised a daughter, Olena, and later their grandson, Yevhen.

His grandfather was the soft one, Yevhen, 22, recalled in an interview. His grandmother was strict, “It was like good cop, bad cop,” he said laughing. “She taught me a lot,” he added.

Ms. Shchehlova was Russian by origin, and her bookshelves were full of Russian classics. Since her husband died a few years ago, she had lived alone, surrounded by her books and family photographs, with Ralph, a German shepherd, and a cat for company.

Her daughter, Olena, lived in a neighboring suburb, Irpin, and wanted her mother to join her there when the war started, but the roads were blocked by the fighting. Within days, the electricity and telephones went down. She tried to call her mother on March 7, her birthday, but could not reach her.

When the bombardment worsened sharply in their neighborhood, Olena and Yevhen fled on foot across a destroyed bridge toward Kyiv.

The last time Yevhen spoke to his grandmother, she was weeping but was happy that they were out of danger. “She said everything was fine,” he said.

Held captive in a potato cellar.

By mid-March, the atmosphere in Bucha was growing uglier. New Russian units had taken over control and reprisals against civilians grew.

For several days around March 18, a lot of killing occurred in Bucha.

Russian troops had occupied School No. 3 on Vokzalna Street, and they were firing mortars from empty land behind it. Soldiers smashed their armored vehicles through garden fences and camped in people’s homes.

At some point, Oksana Sulyma was apprehended and taken to a house on Vokzalna Street. The house backed up to School No. 3, which she had attended as a girl. Oksana was found there in April, imprisoned in a potato cellar, shot in the head. She was wearing only a fur coat.

The police found bullet casings by the trap door of the cellar and determined she was killed on March 17, a week after going missing. Her passport and ID card were later found by the Ukrainian police near the railway tracks.

Russian soldiers had been living in the house, sleeping on mattresses in the living room and heating water for washing. In a bedroom upstairs, women’s clothes and underwear were strewn about and the police found a used condom. An official familiar with the case said there was evidence that Oksana had been raped.

Around the same time, Anna Noha moved to an apartment a few blocks away, just west of Vokzalna Street. Her windows had been blown out by the shelling and it was freezing, so a friend, Vladyslav, took her and a former classmate, Yuriy, to stay with his mother, Lyudmyla.

Anna brought coffee and tea with her and asked Lyudmyla if she could also bring an abandoned cat, a beautiful longhaired Siamese, that she had found.

“She seemed very kind,” said Lyudmyla, who asked that only her first name be used. “That’s why I gave her shelter.”

On the evening of March 18, the three friends cleaned the apartment and took out the trash, Lyudmyla said. They said they would have a smoke while they were outside. They never came back.

Lyudmyla later learned from neighbors that Russian troops had detained them by the trash bins and marched them with bags over their heads into the basement of a nearby 10-story building. Neighbors said Anna had shouted out “Glory to Ukraine.”

A week later, Lyudmyla was gathering firewood with a friend when she found their bodies. First she saw Anna and Yuriy, lying in the garden of an unoccupied house. Later she found her son, Vladyslav, inside a shed. They had been beaten and each was shot through an eye. Anna was so badly bludgeoned that her face was unrecognizable, Lyudmyla said.

“She was cheerful, strong,” Lyudmyla said of Anna. “Maybe she suffered for her outspokenness.”

Was it suicide? Friends and family say no.

By March 19, only two residents, Ms. Shchehlova, the 81-year-old retired epidemiologist, and Mariya, 84, a former factory worker, remained on their narrow lane.

Soldiers occupied a house at the end of the lane, Mariya said. “There were 15 of them in that gang and they made such trouble here,” she said. Someone stole bottles of alcohol from her fridge while she dozed in an armchair, she said.

A builder, Bogdan Barkar, 37, was out scouring for food one day and came across Ms. Shchehlova in the alley behind her house. “She had tears in her eyes,” he said. He sensed she was being threatened by someone. “Just come by in two days and see if I am alive or not,” she told him.

Some days later, Mariya said she heard Ms. Shchehlova arguing with someone and saw a strange man in her yard. But weak from hunger and fearful, Mariya did not intervene.

It was only days later when the Russians withdrew from Bucha that Mariya’s son came back and discovered Ms. Shchehlova hanging from a tree, a ladder propped against the trunk.

The police recorded it as a suicide, but few who knew Ms. Shchehlova believed she could have done it herself. She was religious and knew it to be a sin, said her neighbor Valentyn Melnyk.

Her grandson Yevhen cut the ropes down from the tree and said he doubted that she would have been able to tie them on the high branches. But he was resigned to his doubts.

“I am a realist,” he said. “How is it possible to find out what happened if all the neighbors left, and she was alone at that moment?”

The grief and loss remains overwhelming. His mother, a refugee in Sweden, wept at missing her mother’s funeral.

Anna Noha’s father, Volodymyr Kopachov, died on July 7, soon after burying his daughter. He lies beside her in Bucha City Cemetery in the section reserved for victims of the war.

Oksana Sulyma’s parents made separate visits to the cellar where she died. Weeping, her mother distributed sweets to the neighbors.

AUSTIN, Texas--(BUSINESS WIRE)--As the first multifamily management company to be recognized in the Public Relations and Marketing Excellence Awards, … END_OF_DOCUMENT_TOKEN_TO_BE_REPLACED

There have been whispers of cooling housing and rental prices in the San Francisco Bay Area, but that hasn't yet translated into practical, noticeable … END_OF_DOCUMENT_TOKEN_TO_BE_REPLACED

Cars pass in Independence Square at twilight in Kyiv, Ukraine, Monday, Oct. 31, 2022. Rolling ... [+] blackouts are increasing across Ukraine as the … END_OF_DOCUMENT_TOKEN_TO_BE_REPLACED