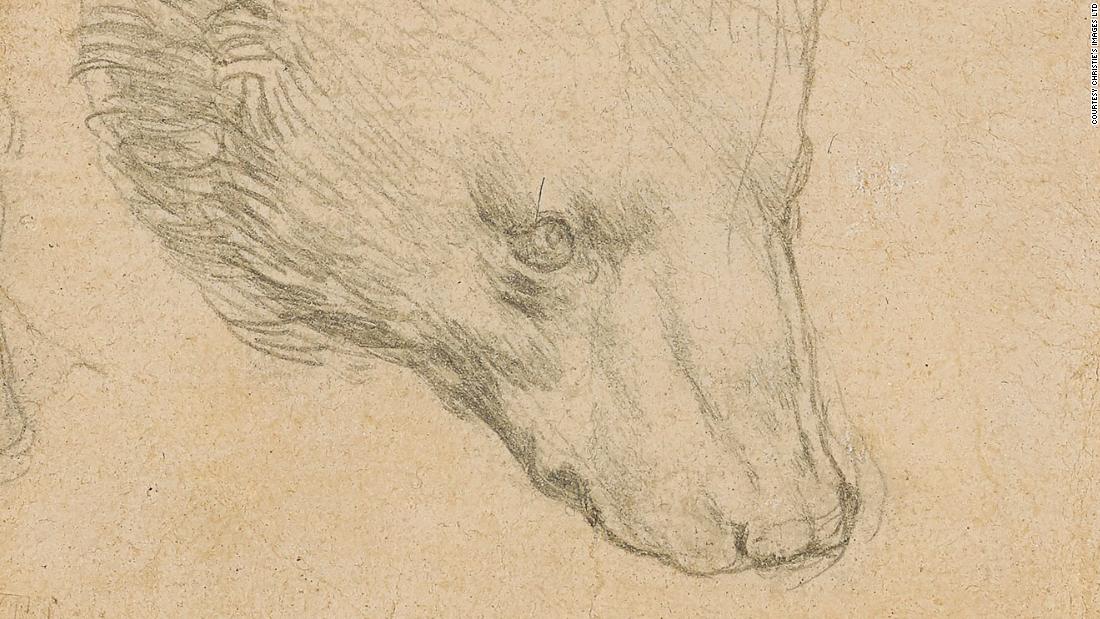 A tiny sketch of a bear by Leonardo da Vinci is expected to sell for over $16 million at auction.

The item is one of only eight Leonardo drawings left in private hands, according Christie’s, the auction house organizing the sale.

Measuring less than 8 square inches, the drawing was made on pale pink-beige paper using silverpoint — a technique, taught to Leonardo by his master Andrea del Verrocchio, that involves marking chemically treated paper with silver rods or wire.

The sketch has changed hands several times over the centuries — in fact, it was once sold by Christie’s for just £2.50 (about £312, or $439, in today’s money) in 1860. Titled “Head of a Bear,” it has since been displayed at major institutions including the National Gallery in London, Louvre Abu Dhabi and Saint Petersburg’s State Hermitage Museum.

In a press release, the chairman of Old Master paintings at Christie’s New York, Ben Hall, called the sketch “one of the most important works from the Renaissance still in private hands,” adding that it had “been owned by some of the most distinguished collectors in the field of Old Masters across many centuries.” Notable previous owners include painter Sir Thomas Lawrence and art collector Captain Norman Robert Colville.

The drawing, which includes the artist’s signature, will go on display in Hong Kong later this month. It will then move on to London, where it is expected to fetch between £8 million and £12 million ($11.21 million to $16.82 million) at a July sale.

The most expensive Leonardo sketch ever to appear at auction is “Horse and Rider,” which sold for £8 million (over $11.2 million) in 2001. Stijn Alsteens, international head of the Old Masters department at Christie’s Paris, said he had “every reason to believe we will achieve a new record in July for ‘Head of a Bear,'” describing it in a press statement as “one of the last drawings by Leonardo that can be expected to come onto the market.”
The sale price is, however, likely to fall short of the current auction record for an Old Master drawing. In 2009, Raphael’s “Head of a Muse,” a study for a fresco commissioned by Pope Julius II for the Stanza della Segnatura in the Vatican, netted almost $49 million at Christie’s in London.

How do art auctions really work?

Though Leonardo is best known for oil paintings like the “Mona Lisa” and “The Last Supper,” the Renaissance master was also celebrated for his anatomical sketches. His drawing “The Vitruvian Man,” a mathematically precise rendering of a nude male, is often hailed as one of his greatest accomplishments.

Leonardo was fascinated by the natural world, and he completed many other animal sketches in his lifetime. His drawings of cats and dogs, as well as one of a bear walking, are among those on display at institutions including the British Museum and Metropolitan Museum of Art.
Other Leonardo sketches depicted religious figures and biblical scenes. In 2016, a drawing titled “The Martyred Saint Sebastian” was set to fetch 15 million euros ($16 million at the time) at auction, though the sale was blocked after the French government declared the item to be a national treasure.
Other notable lots at the Christie’s auction in July, titled “The Exceptional Sale,” include an orrery clock designed by Jacques-Thomas Castel and an amethyst ormolu-mounted potpourri vase by Jean-Claude Chambellan Duplessis.

AUSTIN, Texas--(BUSINESS WIRE)--As the first multifamily management company to be recognized in the Public Relations and Marketing Excellence Awards, … END_OF_DOCUMENT_TOKEN_TO_BE_REPLACED

There have been whispers of cooling housing and rental prices in the San Francisco Bay Area, but that hasn't yet translated into practical, noticeable … END_OF_DOCUMENT_TOKEN_TO_BE_REPLACED

Cars pass in Independence Square at twilight in Kyiv, Ukraine, Monday, Oct. 31, 2022. Rolling ... [+] blackouts are increasing across Ukraine as the … END_OF_DOCUMENT_TOKEN_TO_BE_REPLACED