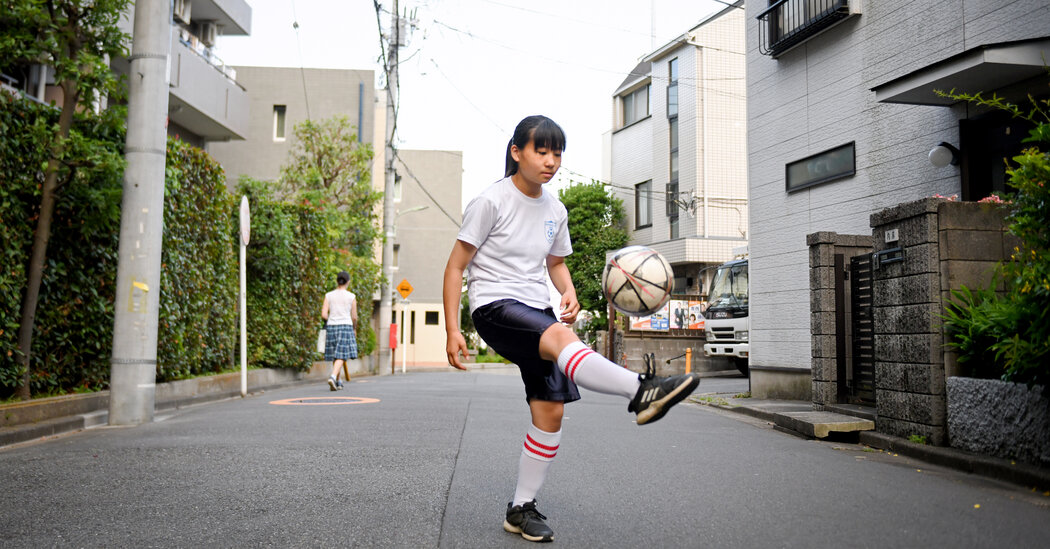 TOKYO — Kurumi Mochizuki is the kind of skilled soccer player who can roll a ball from between her shoulder blades to the top of her head and onto her right foot, keeping it aloft for more than a dozen kicks. She makes it look so easy.

Yet when she practices with her local club team in southeastern Tokyo, her coaches sometimes advise her to take longer breaks than her teammates, and warn her not to pick up heavy bags of balls when clearing equipment from the field.

All because she is a girl.

Kurumi, 13, is the only girl on her team. She plays with boys because there are no girls’ club teams near her neighborhood and no girls’ team at her middle school. Finding a team in high school will be difficult, too. Only one of the 14 schools in Kurumi’s area offers a girls’ team. Her older brother, who plays soccer at his high school, has had no such trouble — almost all the high schools in the district have boys’ soccer teams.

Tokyo Olympics, which open next month, offer an opportunity to anoint another crop of champions to inspire girls with athletic aspirations. But after the Olympic spotlight dims, those like Kurumi will still face powerful obstacles.

Japan has no law like Title IX, the American statute that requires schools receiving public funding to offer equal opportunities to boys and girls, and there is no public data on how much schools spend on extracurricular sports or how it breaks down on gender lines.

Female athletes who persevere often have to push past stereotypes that they are doing something unladylike, jeopardizing their chances of attracting boys and later becoming wives and mothers. Even their coaches view their participation through this lens, in some cases giving them etiquette lessons to ensure they are ready for domestic life.

2011 Women’s World Cup and claimed the silver medal at the London Olympics in 2012.

She followed her brother into soccer when she was 6. “When I was little, I never thought about it,” she said of being the sole girl on her team. “But once I got a bit older, I was much more aware of it.”

The extracurricular soccer team at her public middle school is technically coed, although not one of the team’s 40 players is a girl. Kurumi decided to stick to the club team she had played with since elementary school rather than try to break into a new group at school.

“There is a difference in strength and aggressiveness between boys and girls,” said Shigeki Komatsu, the middle school’s vice principal, standing on the sidelines as the boys scrimmaged on a gravel pitch, their cleats kicking up puffs of dust.

hopes that the situation would improve for female athletes in Japan.

Before that victory, girls in the United States had flocked to suburban soccer clubs after the U.S. women won the World Cup on American soil in 1999.

Koshien, that is more than 100 years old. Just after New Year’s, huge audiences tune in to watch the Hakone Ekiden, a college-level marathon relay that is restricted to male runners.

There are few vocal advocates for female athletes, and most of their coaches are men who often do not provide support for the physical changes that girls undergo in adolescence.

Hanae Ito, a swimmer who represented Japan at the Beijing Summer Olympics in 2008, said coaches along the way had told her she was “mentally weak” when she gained weight or suffered menstruation-related mood changes as a teenage athlete.

“I thought it was a problem with me or that it was my fault,” she said. “But I think that this all ties back to Japan being a patriarchal society. Even women’s sports is seen from a male gaze.”

The idea that female athletes need to worry about their future prospects with men is deeply rooted.

After Hideko Maehata, an Olympic swimmer, became the first woman to win a gold medal for Japan, The Asahi Shimbun, one of Japan’s largest newspapers, heralded her victory at the 1936 Berlin Summer Games with the headline: “Next Up Is Marriage.”

Such attitudes persist today. Yuki Suzuki, who played in Japan’s Nadeshiko women’s professional soccer league and taught the sport until she gave birth to her son, is frustrated by the rigid gender definitions.

“Girls are often told ‘be feminine, be feminine,’” said Ms. Suzuki, now 34. “I think we have to change the fundamental culture of Japan when it comes to women.”

Even when girls get the chance to play, a bias toward boys emerges in small ways. At the middle school Kurumi attends, the boys’ volleyball and basketball teams get the gym three days a week for practice, while the girls use it the other two days.

Kurumi said she tried not to worry about the unequal treatment. She does not hold it against her coaches, she said, for barring her from carrying heavy equipment during practice.

“I am sure the coaches just care about me,” she said. “But personally, I know I could carry it.”

Helene Thiesen was one of 22 Inuiit children separated from their families in Greenland 70 years ago. Editor’s note: This story is part of CNN’s … END_OF_DOCUMENT_TOKEN_TO_BE_REPLACED