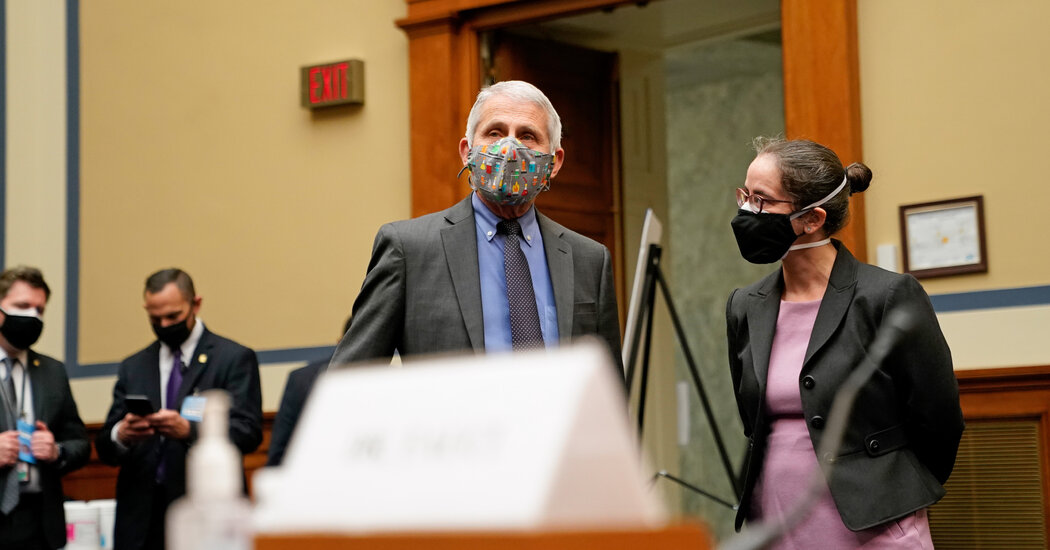 Three top federal health officials appeared on Capitol Hill on Thursday and implored Americans to get vaccinated against the coronavirus, but said little about the investigation into whether the Johnson & Johnson vaccine may be linked to a small number of cases of rare blood clots, or when that vaccine might be put back into use.

“Hopefully we’ll get a decision quite soon, as to whether or not we can get back on track with this very effective vaccine,” Dr. Anthony S. Fauci, President Biden’s top medical adviser for the coronavirus, told a House panel.

Dr. Fauci’s comments came as the future of the Johnson & Johnson one-shot vaccine hung in the balance. Earlier this week, the Food and Drug Administration and the Centers for Disease Control and Prevention called for a pause in the use of the vaccine in the wake of reports of a small number of rare blood clots in recipients. Though it is unclear whether the vaccine was responsible for the clots, injections came to a sudden halt across the country.

On Wednesday, a C.D.C. advisory panel suggested that it would be a week to 10 days before they had enough information to assess the vaccine’s risks and could make a decision about its future. In the meantime, the officials — Dr. Fauci; Dr. Rochelle Walensky, the C.D.C. director; and Dr. David Kessler, who runs the Biden administration’s vaccine effort — urged Americans to continue to get vaccinated.

The reports of blood clots were the second recent blow to the Johnson & Johnson vaccine. Earlier this month, an ingredient mix-up at a Baltimore manufacturing plant owned by Emergent BioSolutions ruined up to 15 million doses of the vaccine. The F.D.A. is now inspecting the plant to see whether any vaccine doses manufactured there can be released to the public.

About 7.7 million Americans had received the Johnson & Johnson vaccine as of Wednesday, accounting for less than 4 percent of the more than 198 million doses administered across the country. The Pfizer and Moderna vaccines are in much greater supply.

Officials note that the blood clots are extremely rare; the handful of cases represent less than one in one million recipients, although that incidence estimate could go up if more cases are reported.

Biden administration officials say that the absence of the Johnson & Johnson vaccine might not have a major impact on the U.S. vaccination campaign. But if use of the vaccine is severely restricted worldwide, it could prove disastrous for the global vaccination effort.

Health officials had hoped that the Johnson & Johnson vaccine, along with a similar vaccine developed by AstraZeneca, would help supply the world because they are less expensive and easier to store and handle than the Pfizer and Moderna vaccines.

AUSTIN, Texas--(BUSINESS WIRE)--As the first multifamily management company to be recognized in the Public Relations and Marketing Excellence Awards, … END_OF_DOCUMENT_TOKEN_TO_BE_REPLACED

There have been whispers of cooling housing and rental prices in the San Francisco Bay Area, but that hasn't yet translated into practical, noticeable … END_OF_DOCUMENT_TOKEN_TO_BE_REPLACED

Cars pass in Independence Square at twilight in Kyiv, Ukraine, Monday, Oct. 31, 2022. Rolling ... [+] blackouts are increasing across Ukraine as the … END_OF_DOCUMENT_TOKEN_TO_BE_REPLACED