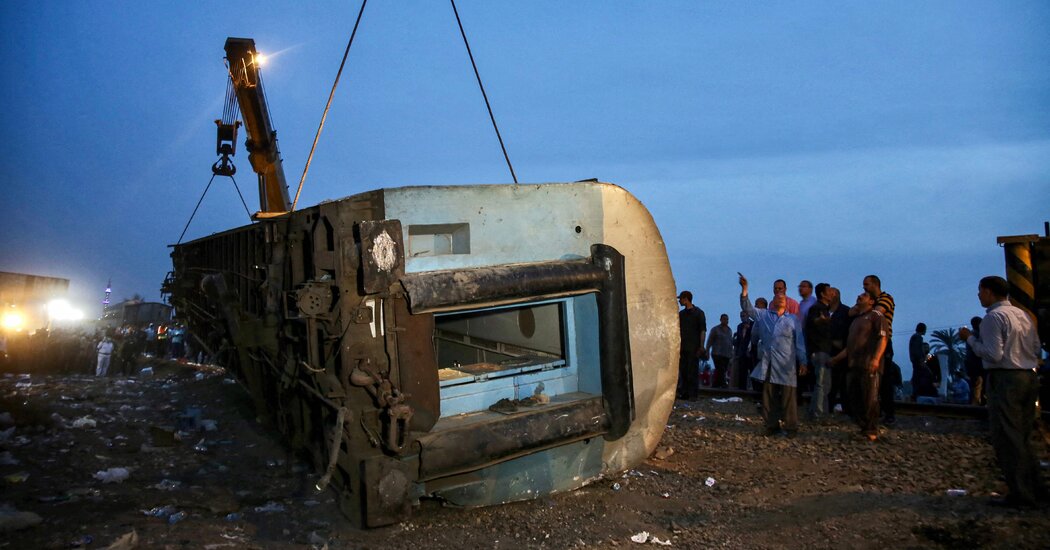 A passenger train derailed Sunday north of Cairo, killing at least 11 people and injuring scores more, the Egyptian authorities said. It was the latest of several deadly rail accidents to hit the country in recent years.

At least 60 ambulances rushed to find survivors and help those who were hurt when four train cars ran off the rails just outside Cairo, the railway authority said. At least 98 people were injured, mostly with broken bones, cuts and bruises, the Health Ministry said in a statement.

Videos on social media showed train cars overturned at the city of Banha in Qalyubia Province and passengers escaping along the tracks. The train was bound for the Nile Delta city of Mansura from Cairo, the capital, the rail authority said in a statement.

Salvage teams could be seen searching for survivors and removing the derailed train cars. It was not immediately clear what caused the derailment, and prosecutors said they were investigating.

killing at least 18 people and injuring 200 others. Prosecutors said gross negligence by railway employees was behind that crash on March 25, which caused public outcry across the country.

Train wrecks are common in Egypt, where the railway system has a history of badly maintained equipment and mismanagement. The government says it has begun a broad effort to renovate and modernize the system. President Abdel Fattah el-Sisi said three years ago that the government needed about 250 billion Egyptian pounds, or $14.1 billion, to overhaul the country’s rundown trains.

locomotive slammed into a barrier in Cairo’s main railway station, causing a huge explosion and a fire that killed at least 25 people. That crash prompted the transportation minister at the time to resign.

Egypt’s deadliest train crash was in 2002, when more than 300 people were killed after a fire broke out in an overnight train traveling from Cairo to southern Egypt.

AUSTIN, Texas--(BUSINESS WIRE)--As the first multifamily management company to be recognized in the Public Relations and Marketing Excellence Awards, … END_OF_DOCUMENT_TOKEN_TO_BE_REPLACED

There have been whispers of cooling housing and rental prices in the San Francisco Bay Area, but that hasn't yet translated into practical, noticeable … END_OF_DOCUMENT_TOKEN_TO_BE_REPLACED

Cars pass in Independence Square at twilight in Kyiv, Ukraine, Monday, Oct. 31, 2022. Rolling ... [+] blackouts are increasing across Ukraine as the … END_OF_DOCUMENT_TOKEN_TO_BE_REPLACED