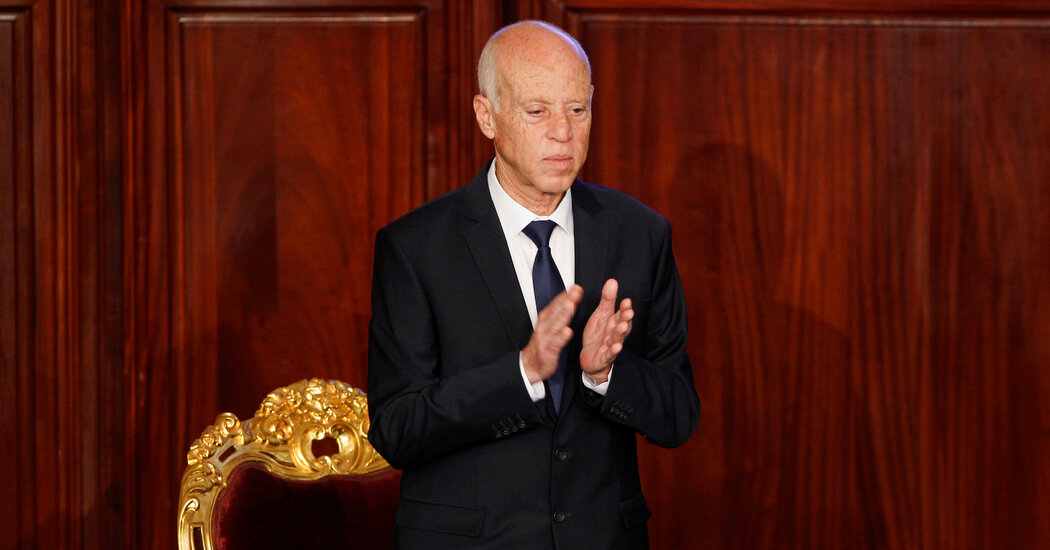 CAIRO — Tunisia’s fledgling democracy, the only one remaining from the popular revolutions that swept the Arab world a decade ago, trembled on the brink of collapse Monday after its president sought to seize power from the rest of the government in what his political opponents denounced as a coup.

The president, Kais Saied, who announced the power grab late Sunday, did not appear to have completely succeeded in taking control as of Monday evening, as chaos enveloped the North African country. But many Tunisians expressed support for him and even jubilation over his actions, frustrated with an economy that never seemed to improve and a pandemic that has battered hospitals in recent weeks.

With Syria, Yemen and Libya undone by civil war, Egypt’s attempt at democracy crushed by a counterrevolution and protests in the Gulf States quickly extinguished, Tunisia was the only country to emerge from the Arab Spring revolutions with a democracy, if a fragile one.

But the nation where the uprisings began now finds even the remnants of its revolutionary ideals in doubt, posing a major test for the Biden administration’s commitment to democratic principles abroad.

statement. Secretary of State Antony J. Blinken, in a phone call Monday with Mr. Saied, encouraged him “to adhere to the principles of democracy and human rights,” a spokesman said.

Defying the Tunisian president, the prime minister, Hichem Mechichi, said he would hold a cabinet meeting even after Mr. Saied announced the dismissal of him and several ministers. Parts of Parliament said they would meet virtually even as soldiers cordoned off the Parliament building.

But the danger remained that Mr. Saied would back up his power grab with greater force, whether by further deploying the military or arresting top officials.

“This is a very concerning development that puts the democracy at great risk of unraveling,” said Safwan M. Masri, executive vice president of Columbia University’s Global Centers network, who studies Tunisia. Referring to Mr. Saied, he said: “An optimistic scenario would be that the Parliament and the Constitution and democratic institutions would prevail and that he would be forced out of office. But I would not bet any money on it.”

Already, the president has announced that he was assuming the public prosecutor’s powers and stripping lawmakers of immunity.

whether the revolution was worth it.

Protests and strikes frequently racked the country, and popular discontent widened the gap between elites who praised Tunisia’s democratic gains and Tunisians who simply wanted to improve their lot.

The coronavirus pandemic made things worse by devastating Tunisia’s tourist industry, an important economic engine. The virus has shaken the government and the health system even further in recent weeks as Tunisians have died of Covid-19 at the highest rate in the Middle East and Africa.

On Sunday, demonstrators across Tunisia called for the dissolution of Parliament, giving Mr. Saied some popular cover to announce that night that he was firing Mr. Mechichi, freezing Parliament for 30 days and assuming executive authority.

Tarek Megerisi, a senior fellow at the European Council on Foreign Relations. “They blame them for all the country’s problems and think that they need to be removed.”

The showdown was a long time coming, with Mr. Saied locked since his election in political infighting with Mr. Mechichi and the speaker of Parliament, Rachid Ghannouchi.

Mr. Saied has been hinting for months at expanding his authority by refusing to swear in ministers and blocking formation of a constitutional court, raising alarm among opponents and political analysts.

In response to chaos in Tunisia’s Covid-19 vaccination rollout last week and a surge in cases that has overwhelmed hospitals, Mr. Saied stripped control of Tunisia’s coronavirus response from the Health Ministry and handed it to the military.

On Sunday night, Mr. Saied cited Article 80 of the Constitution, which he said permits the president exceptional powers. He said he had consulted both Mr. Mechichi and Mr. Ghannouchi and held an emergency meeting with other officials before acting.

Mr. Saied said he was doing so to preserve the country’s “security and independence and to protect the normal operation of state institutions.”

Article 80, however, accords the president such powers only if the country faces an imminent threat and only after the prime minister and parliament speaker have been consulted. Mr. Ghannouchi denied that he had been.

In a statement, Mr. Ghannouchi deplored what he called a “coup” and described the suspension of Parliament as “unconstitutional, illegal and invalid.” The assembly “remains in place and will fulfill its duty,” he said.

In a televised statement, Mr. Saied said, “This is not a suspension of the Constitution.” And he sounded an ominous warning to adversaries: “Whoever fires a single bullet, our armed and security forces will retaliate with a barrage of bullets.”

Videos posted to social media showed crowds cheering, honking, ululating and waving Tunisian flags after the president’s actions Sunday night, the dark night lit up by red flares. Other videos showed Mr. Saied wending through cheering supporters along the main thoroughfare of Tunis, where revolutionaries gathered during the 2011 protests.

The next step for Tunisia is unclear. The country has so far failed to form the constitutional court, called for in the 2014 Constitution, that could adjudicate such disputes.

In his statement, Mr. Saied said cryptically that a decree would soon be issued “regulating these exceptional measures that the circumstances have dictated.” Those measures, he said, “will be lifted when those circumstances change.” He also fired the defense minister and acting justice minister on Monday afternoon.

Tunisia’s divisions reflect a wider split in the Middle East between regional powers that supported the Arab revolutions and the political Islamist groups that came to power at the time (Turkey and Qatar), and those that countered the uprisings (Saudi Arabia, the United Arab Emirates and Egypt). While Turkey and Qatar expressed concern on Monday, the others remained quiet.

Reporting was contributed by Nada Rashwan from Cairo, Lilia Blaise and Massinissa Benlakehal from Tunis, and Michael Crowley from Washington.

You were seeing double this week: A spectacular $54 million compound featuring two equally luxurious mansions separated by a private lake in Southwest … END_OF_DOCUMENT_TOKEN_TO_BE_REPLACED

Taylor Heinicke #4 of the Washington Football Team celebrates after defeating the Seattle Seahawks at FedExField on November 29, 2021 in Landover, … END_OF_DOCUMENT_TOKEN_TO_BE_REPLACED

Members of the Ukrainian Police force, Larisa, 31, and Roman, 30, get married at a wedding hall at an expo center in Kyiv, Ukraine, on … END_OF_DOCUMENT_TOKEN_TO_BE_REPLACED