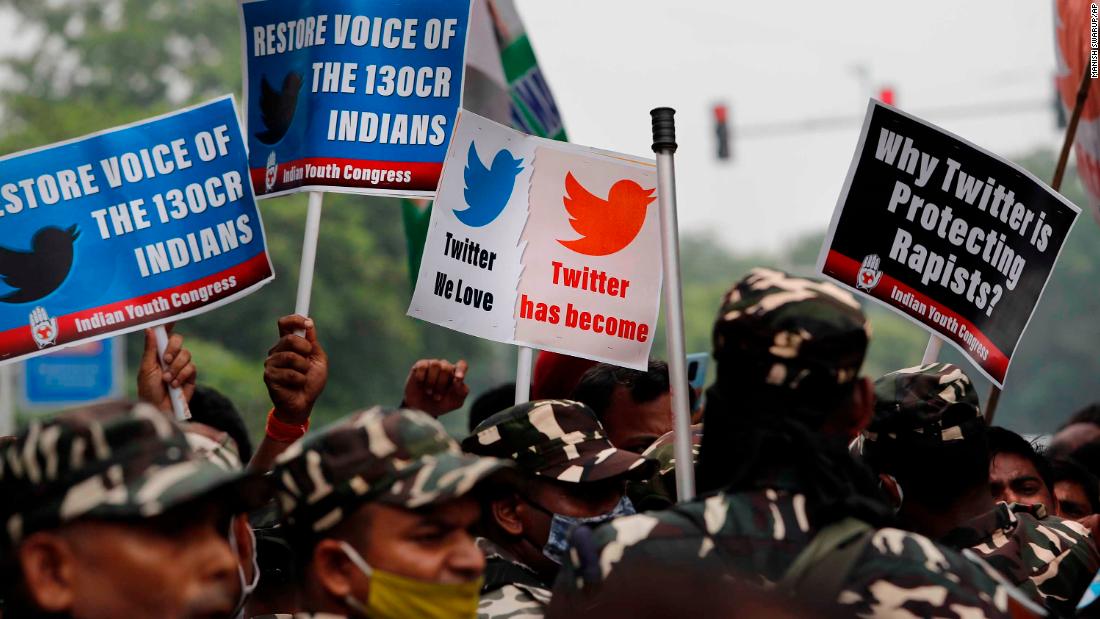 India’s main opposition party is accusing Twitter of stifling freedom of speech after the company took action against hundreds of tweets that identified the family of a child who was allegedly raped and murdered.

Twitter (TWTR)’s decision followed a call from India’s child protection agency to block access to tweets it said identified a 9-year old girl who was killed in Delhi earlier this month. Police are investigating allegations of rape made by the victims’ family and neighbors.

The girl was a member of the Dalit community, the most oppressed group in India’s Hindu system of caste hierarchy. Four men have been arrested, though they have not yet been charged.

The incident prompted a judicial inquiry and sparked days of protests from outraged villagers and activists who think Prime Minister Narendra Modi’s government has not done enough to address longstanding sexual assault problems.

Some of Modi’s most vocal critics include members of the Congress party, the country’s main opposition. Senior Congress leader and MP Rahul Gandhi tweeted August 4 a photo of him with the girl’s parents, adding the caption: “The parents’ tears say one thing — their daughter, the daughter of the country, deserves justice.”

India’s National Commission for Protection of Child Rights, though, asked Twitter last week to take action against Gandhi’s Twitter handle for posting that image. The agency said that by tweeting a photo of the girl’s parents, Gandhi had revealed the identity of a sexual assault victim in violation of Indian law.

When asked about Congress party’s blocked accounts on Thursday, a Twitter spokesperson told CNN Business that the “specific content” flagged by India’s child rights body was reviewed and deemed in violation of the company’s policies as it may have revealed the identity of the alleged sexual assault victim’s parents.

“We have taken proactive action on several hundred Tweets that posted an image that violated our Rules, and may continue to do so in line with our range of enforcement options,” the spokesperson said. “Certain types of private information carry higher risks than others, and our aim is always to protect individuals’ privacy and safety.”

“When our leaders were put in jails, we were not scared. So, why should we be afraid of our Twitter accounts being closed?” the party wrote. “We are the Congress [party], this is the message of the people, we will fight and will continue to do so.”

Congress spokesperson Rohan Gupta told CNN Business on Thursday that 5,000 of its accounts had been blocked by Twitter after posting Gandhi’s picture. He accused the company of “acting under the pressure of government.”

“I understand @Twitter’s position that it has no choice but block accounts that violate Indian law &Twitter policy. While the law is what it is, policy can be reviewed,” tweeted senior party leader Shashi Tharoor on Thursday. “Automatically locking accounts is an extreme step that stifles the freedom of expression of Indian citizens.”

Twitter has for months been in a tough spot in India. The government introduced new rules in February that, among other things, require social media companies to create new roles in the country to ensure that they follow local laws and address complaints from Indian users. Companies are also required to trace the “first originator” of messages if asked by authorities.

In May, Twitter expressed concerns about “core elements of the new IT Rules” and the “potential threat to freedom of speech” in the country. But it later pledged to meet the new requirements.

The Mississippi River town of Ste. Genevieve, MO, might be the ideal spot for a buyer in search of a refreshing idea.This mixed-use structure on the … END_OF_DOCUMENT_TOKEN_TO_BE_REPLACED

More From ForbesJan 26, 2022,09:00am ESTCompany Named For Jetsons Son Unveils Autonomous Cargo EVTOL Drone Of The Near … END_OF_DOCUMENT_TOKEN_TO_BE_REPLACED

The prison in Hasaka where thousands of Islamic State fighters are held, in 2019.Credit...Ivor Prickett for The New York TimesThe prison at the center … END_OF_DOCUMENT_TOKEN_TO_BE_REPLACED