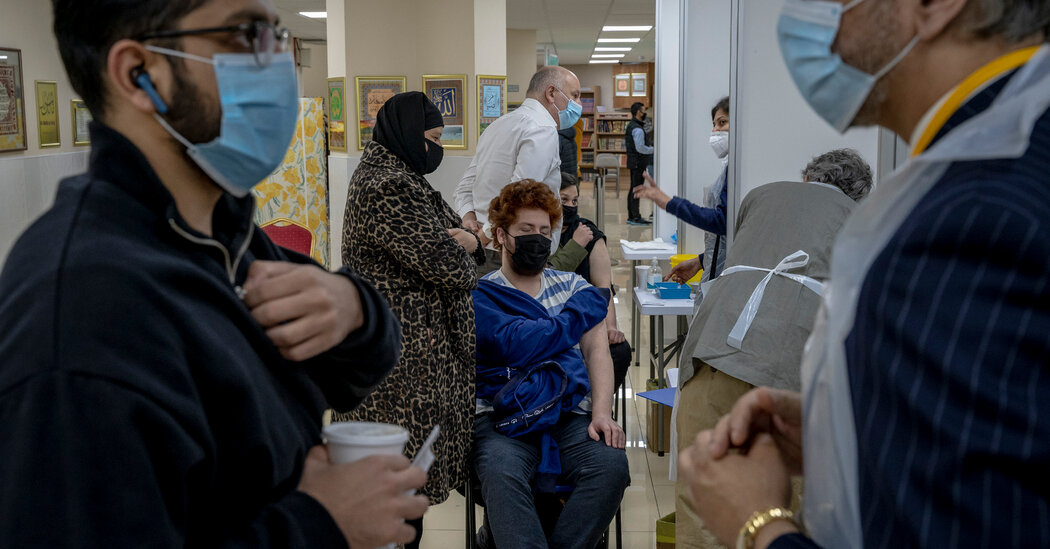 LONDON — Minority communities in Britain have long felt estranged from the government and medical establishment, but their sense of alienation is suddenly proving more costly than ever amid a coronavirus vaccination campaign that depends heavily on trust.

With Britons enjoying one of the fastest vaccination rollouts in the world, skepticism about jabs remains high in many of the very communities where Covid-19 has taken the heaviest toll.

“The government’s response to the Black, Asian and minority ethnic communities has been rather limited,” said Dr. Raja Amjid Riaz, 52, a surgeon who is also a leader at the Central Mosque of Brent, an ethnically diverse borough of North London. “Those people have not been catered for.”

As a result, communities like Brent offer fertile ground for the most outlandish of vaccine rumors, from unfounded claims that they affect fertility to the outright fabrication that the shots are being used to inject microchips.

hit disproportionately hard both by the pandemic itself and by the lockdowns that followed, many local leaders like Dr. Riaz have taken it upon themselves to act.

Some are well-known and trusted figures like religious leaders. Others are local health care workers. And still others are ordinary community members like Umit Jani, a 46-year-old Brent resident.

Mr. Jani’s face is one of many featured on 150 lamppost posters across the borough encouraging residents to get tested for the virus and vaccinated, part of a local government initiative.

The goal is to reframe the community’s relationship with the power structure, and perhaps establish some trust.

One recent Saturday morning, Mr. Jani set out with another man to survey local residents, setting up a table by a convenience store as nearly a thousand people lined up outside a food bank nearby. The survey was about mental health services, but Mr. Jani took the opportunity to ask about the pandemic.

“Are you afraid to take the vaccine?” he asked one local man.

The man, speaking in Gujarati, a language native to India, said he wanted to take the vaccine, but first wanted to consult with his doctor because he feared an adverse reaction.

Despite this man’s concerns, Mr. Jani said he believed their efforts were making headway.

“It’s become less of a challenge to persuade people,” said Mr. Jani, who himself recently had his first shot.

The numbers appear to back that up: A survey led by Imperial College London and YouGov found that in February, almost 77 percent of people in Britain said they would take a vaccine if offered, up from 55 percent in November.

But other numbers make clear how far the country still has to go.

A government report found that vaccination rates in people 70 and older from early December to mid-March were lowest among the country’s Black African, Black Caribbean and Bangladeshi communities. It also noted that those living in deprived areas like Brent, where the poverty rate of 33 percent is slightly above London’s, were less likely to receive a shot.

colorblind approach” toward distributing vaccines during a pandemic that has not hit all communities equally.

In January, the British government said it would give local governments and other groups 23 million pounds, about $31 million, toward encouraging vaccinations among people most at risk from the coronavirus, including minority groups.

Long before the government took that initiative, some local community leaders were already on the job, trying to dispel conspiracy theories and increase vaccinations. They have waged their campaign both online and door-to-door, and have run workshops aimed at countering misinformation.

At Dr. Riaz’s mosque, leaders have been working for months to tackle vaccine hesitancy through a help line, WhatsApp chats, weekly sermons and webinars. And as Ramadan approaches, they are hoping they will be able to vaccinate people who attend mosque after daily fasting.

While the government’s pandemic guidance has been issued in English, community leaders have offered multilingual messages on videos and local radio stations. That approach has particular resonance in a place like Brent, where 149 languages are spoken.

open letter this past week from well-known names, among them the comedian and actor Lenny Henry, urged Black Britons to get vaccinated.

The reasons for vaccine hesitancy vary.

It is not just baseless claims, like those in social media videos and messages circulated on outlets like WhatsApp that maintain — incorrectly — that the vaccines contain animal products forbidden under some religious practices.

Some are simply worried the drugs were developed too quickly. And, research suggests, that much of the hesitation grows out of Britain’s long history of racism and discrimination, as well as a general mistrust of the government and the medical establishment.

“There are fewer doctors who are coming out to tell us exactly what is going on and how this is affecting us,” said Ms. Muyisa, 54.

She considers herself lucky: “I educated myself. I managed to go and find information that helped me understand things.”

Zarvesha Rasool, a 19-year-old student at King’s College London, was inspired to get vaccinated by her faith, and went for her jab at the East London Newham Minhaj-ul-Quran mosque and community center, where she helps teach Quranic studies. Ms. Rasool pointed out that a central tenet of Islam is the importance of looking out not just for oneself but also for the greater good.

“If the government isn’t doing that, you kind of have to tell them, ‘Oh, we exist,’” she said. “Because that’s the only way out.”

In the northern English city of Leeds, Qari Asim, a senior imam, was spurred to action after seeing misinformation spread on WhatsApp in January.

Mr. Asim, the chairman of Britain’s Mosques and Imams National Advisory Board, delivered a sermon that was shared across more than 100 mosques in which he reassured listeners that the vaccines are allowed under Islamic law.

Since then, over 300 mosques have addressed vaccine hesitancy and misinformation. Mr. Asim has also urged mosques to open their doors to the vaccine campaign.

“In this pandemic,” Mr. Asim said, “the messenger is as important as the message.”

AUSTIN, Texas--(BUSINESS WIRE)--As the first multifamily management company to be recognized in the Public Relations and Marketing Excellence Awards, … END_OF_DOCUMENT_TOKEN_TO_BE_REPLACED

There have been whispers of cooling housing and rental prices in the San Francisco Bay Area, but that hasn't yet translated into practical, noticeable … END_OF_DOCUMENT_TOKEN_TO_BE_REPLACED

Cars pass in Independence Square at twilight in Kyiv, Ukraine, Monday, Oct. 31, 2022. Rolling ... [+] blackouts are increasing across Ukraine as the … END_OF_DOCUMENT_TOKEN_TO_BE_REPLACED