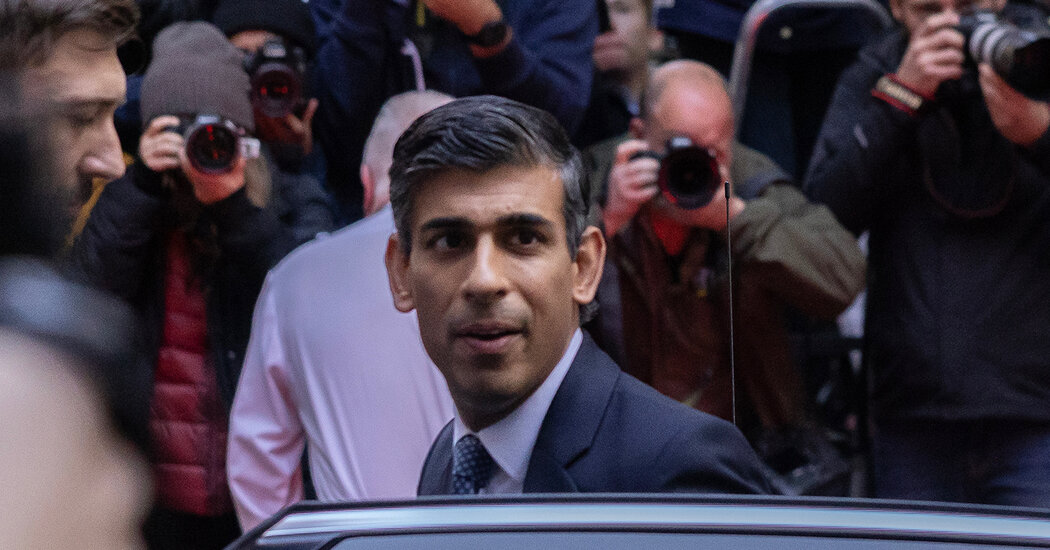 Rishi Sunak already has experience steering Britain’s public finances through a crisis, but that is unlikely to make tackling the country’s economic challenges any less daunting.

As chancellor of the Exchequer from February 2020 to July this year, Mr. Sunak spent heavily to shield households and businesses from some of the economic fallout from the coronavirus pandemic. Back then, inflation was low and the Bank of England was buying government debt, helping keep interest rates low as borrowing ballooned to pay for the large increase in spending.

Now, Mr. Sunak, who is set to be Britain’s next prime minister after being named leader of the Conservative Party on Monday, will face a very different economic backdrop: The inflation rate has topped 10 percent, the highest in 40 years and, like many countries, the economy is slowing down and at risk of falling into a recession. Meanwhile, the Bank of England is continuing to raise interest rates to curb inflation, and won’t be there to purchase government debt because starting next month it is planning to slowly sell its holdings of bonds. That means the government will rely more on investors, who have been demanding higher interest rates, than the central bank to buy bonds.

In these circumstances, Mr. Sunak has several urgent issues to resolve. One is how to support households squeezed by rising energy costs, after Russia’s war in Ukraine introduced huge volatility into global energy markets. As things stand, household bills have been frozen from this month through to April at an average of 2,500 pounds ($2,826) a year, but after that the government is expected to develop a cheaper policy to help the most vulnerable households. A similar policy is in place to help businesses for six months.

After setting aside tens of billions of pounds to keep energy bills down, the government is also under pressure to show how it will keep borrowing in check, in an effort to restore Britain’s fiscal credibility in markets. Jeremy Hunt, the finance minister recently installed by Liz Truss but a supporter of Mr. Sunak, is scheduled to deliver a fiscal statement on Oct. 31 that he said would show Britain’s debt falling as a share of national income over the medium term.

To bring down debt levels, “decisions of eye-watering difficulty” on spending and tax will need to be made, Mr. Hunt has said. He said he will be asking every government department to find ways to save money despite their already stretched budgets. At the same time, Mr. Hunt said taxes are likely to rise as well. Mr. Sunak, however, is not obligated to keep Mr. Hunt as chancellor or stick to the current timetable for the fiscal statement, though many analysts expect him to.

“The United Kingdom is a great country, but there is no doubt we face a profound economic challenge,” Mr. Sunak said on Monday in a short speech. “We now need stability and unity.”

At this stage, Mr. Sunak hasn’t revealed details about his economic plan as prime minister but investors appear to be taking the prospect of his premiership in their stride.

The pound is trading at about $1.13, a little higher than it was on Sept. 22 before the tax-cutting plan by Ms. Truss that roiled markets, pushing the pound steeply lower and borrowing costs higher. Government bonds yields have fallen from their recent highs. On Monday afternoon, the yield on 10-year bonds was at about 3.75 percent, after closing at 4 percent on Friday. It’s the lowest level since the fiscal statement by Ms. Truss’s government in September.

Lower interest rates will be a comfort to Mr. Sunak. For one, lower rates will shrink the amount of money the Treasury will need to set aside for interest rate payments, which could ease spending cuts and tax increases. But there are other reminders of the economic difficulties Britain faces.

On Monday, a measure of economic activity in Britain dropped, as the services industry posted its worst monthly decline since January 2021, according to the Purchasing Managers’ Index which measures economic trends. The index for both services and manufacturing activity fell to 47.2 points. A reading below 50 means a contraction in activity.

The data showed that the pace of economic decline was gathering momentum, said Chris Williamson, an economist at S&P Global Market Intelligence.

And on Friday, the credit ratings agency Moody’s changed its outlook on Britain to negative, from stable, while reaffirming the country’s current Aa3 investment grade rating. A lower credit rating tends to lead to higher government borrowing costs.

Moody’s said the outlook was changed to negative because of the “heightened unpredictability in policymaking amid weaker growth prospects and high inflation.” There was also a risk that increased borrowing would challenge Britain’s debt affordability, especially if there was a “sustained weakening in policy credibility.”

These are just the latest in a laundry list of the government’s economic concerns. They include supporting low-income households against the rising cost of living, encouraging investment to improve weak productivity growth, smoothing Britain’s trading relationship with the European Union and growing the labor market to ensure businesses can find people with the right skills.

“We need a clear long-term vision of how the new prime minister will deal with the challenges ahead,” Shevaun Haviland, the director general of the British Chambers of Commerce, said in a statement, “and create the business conditions that allow firms, and the communities that rely on them, to thrive.”

AUSTIN, Texas--(BUSINESS WIRE)--As the first multifamily management company to be recognized in the Public Relations and Marketing Excellence Awards, … END_OF_DOCUMENT_TOKEN_TO_BE_REPLACED

There have been whispers of cooling housing and rental prices in the San Francisco Bay Area, but that hasn't yet translated into practical, noticeable … END_OF_DOCUMENT_TOKEN_TO_BE_REPLACED

Cars pass in Independence Square at twilight in Kyiv, Ukraine, Monday, Oct. 31, 2022. Rolling ... [+] blackouts are increasing across Ukraine as the … END_OF_DOCUMENT_TOKEN_TO_BE_REPLACED