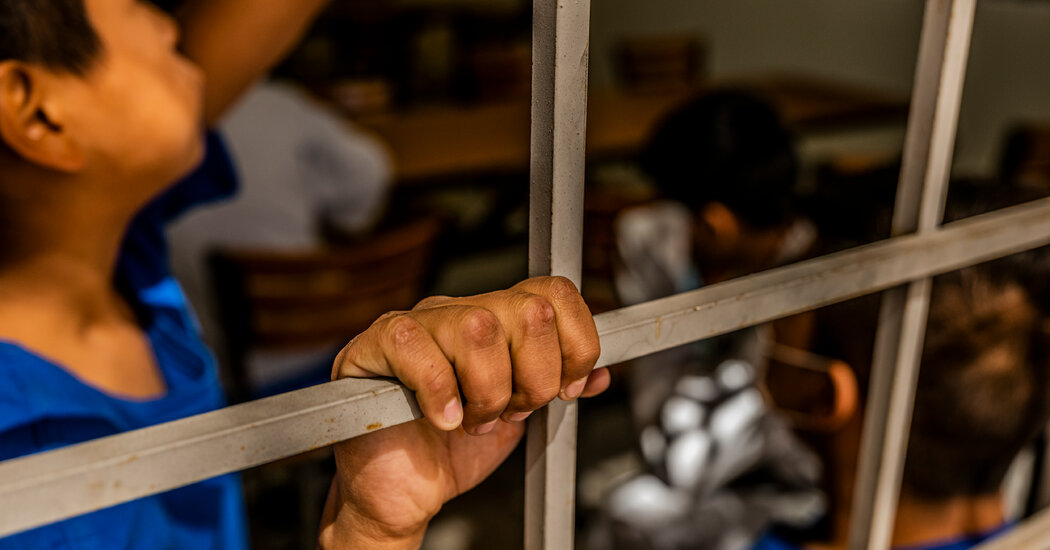 MEXICO CITY — The number of migrant children arriving in Mexico and hoping to enter the United States has increased ninefold from January to March this year, the U.N. Children’s Fund said Monday, with an average of 275 minors entering the country every day.

The number of migrant children reported in Mexico rose to 3,500 at the end of March from 380 at the start of the year, according to the Children’s Fund, or UNICEF. The number includes data from Mexico’s National Migration Institute and other official sources, and provides a detailed look into the crisis.

“I was heartbroken to see the suffering of so many young children, including babies, at the Mexican border with the U.S.,” said Jean Gough, UNICEF’s regional director for Latin America and the Caribbean, after wrapping up a five-day visit to Mexico, where he toured the northern border with the United States.

The flow of minors is part of a larger migrant crisis that has left American officials struggling to control the border, with the Biden administration expecting more apprehensions at the frontier this year than at any point in the last two decades.

The estimated 275 migrant children arriving to Mexico each day include both those coming from Central America and those who are being expelled from the United States into Mexico, according to UNICEF.

The U.N. agency found that children represented at least 30 percent of the migrant population in many Mexican shelters. Half of all children at the shelters traveled without their parents, one of the highest proportions ever recorded in Mexico, according to UNICEF.

“Most of the shelter facilities I visited in Mexico are already overcrowded and cannot accommodate the increasing number of children and families migrating northward,” Mr. Gough said.

has warned migrants not to make the journey because the border is closed, the message has not reached the average citizen in Central America. Human smugglers across Central America are preying on those desperate enough to make the trek, offering their services and saying that the migrants will be welcomed into the United States.

federal order known as Title 42, introduced by Donald J. Trump’s administration but kept in place by Mr. Biden. The order justifies rapid expulsions as a health measure amid the pandemic, allowing the United States to skirt its obligations to asylum seekers.

The trek from Central America through Mexico is arduous. Families and unaccompanied minors often travel hundreds of miles on foot only to reach Mexico and be robbed, kidnapped for ransom or sexually abused by human smugglers and criminal networks that stalk migrant corridors.

In its statement, UNICEF called for the international community to increase its support to Mexico, to help it expand its shelter network and assistance to migrants.

The U.N. agency also called for member organizations to increase aid to Central America, to improve the living conditions for citizens there so they feel they do not have to migrate. That strategy is also being pursued by Mr. Biden’s administration, which plans to spend $4 billion over the next four years on development programs in the region.

“The best way to give migrant families a good reason to stay in their communities is to invest in their children’s future at the local level,” he added. “The real child crisis is not at the U.S. border, it’s in the poorest communities of northern Central America and Mexico.”

MIAMI--(BUSINESS WIRE)--Intelli Smart Homes, the leading smart home technology company, has been recognized as one of America’s fastest-growing … END_OF_DOCUMENT_TOKEN_TO_BE_REPLACED

Customers outside a Walmart store in Torrance, California, US, on Sunday, May 15, 2022. Walmart Inc. is scheduled to release earnings figures on May … END_OF_DOCUMENT_TOKEN_TO_BE_REPLACED

The past few years have been brutal on homebuyers' budgets. Would-be buyers have been priced out of some of the most desirable neighborhoods thanks to … END_OF_DOCUMENT_TOKEN_TO_BE_REPLACED