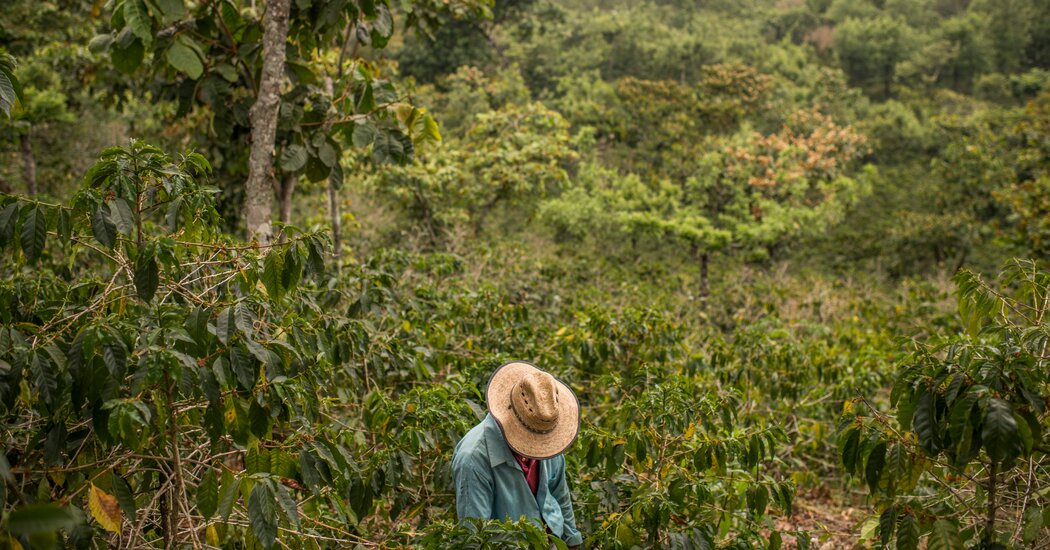 SAN ANTONIO HUISTA, Guatemala — An American contractor went to a small town in the Guatemalan mountains with an ambitious goal: to ignite the local economy, and hopefully even persuade people not to migrate north to the United States.

Half an hour into his meeting with coffee growers, the contractor excitedly revealed the tool he had brought to change their lives: a pamphlet inviting the farmers to download an app to check coffee prices and “be a part of modern agriculture.”

Pedro Aguilar, a coffee farmer who hadn’t asked for the training and didn’t see how it would keep anyone from heading for the border, looked confused. Eyeing the U.S. government logo on the pamphlet, he began waving it around, asking if anyone had a phone number to call the Americans “and tell them what our needs really are.”

soared in 2019 and is on the upswing once more.

have risen, malnutrition has become a national crisis, corruption is unbridled and the country is sending more unaccompanied children to the United States than anywhere else in the world.

That is the stark reality facing Ms. Harris as she assumes responsibility for expanding the same kind of aid programs that have struggled to stem migration in the past. It is a challenge that initially frustrated her top political aides, some of whom viewed the assignment from Mr. Biden as one that would inevitably set her up for failure in the first months of her tenure.

Her allies worried that she would be expected to solve the entire immigration crisis, irked that the early reports of her new duties appeared to hold her responsible for juggling the recent surge of children crossing the border without adults.

linked to drug traffickers and accused of embezzling American aid money, the leader of El Salvador has been denounced for trampling democratic norms and the government of Guatemala has been criticized for persecuting officials fighting corruption.

Even so, Ms. Harris and her advisers have warmed to the task, according to several people familiar with her thinking in the White House. They say it will give her a chance to dive squarely into foreign policy and prove that she can pass the commander-in-chief test, negotiating with world leaders on a global stage to confront one of America’s most intractable issues.

critics denounced as unlawful and inhumane. Moreover, members of the current administration contend that Mr. Trump’s decision to freeze a portion of the aid to the region in 2019 ended up blunting the impact of the work being done to improve conditions there.

But experts say the reasons that years of aid have not curbed migration run far deeper than that. In particular, they note that much of the money is handed over to American companies, which swallow a lot of it for salaries, expenses and profits, often before any services are delivered.

But the government’s own assessments don’t always agree. After evaluating five years of aid spending in Central America, the Government Accountability Office rendered a blunt assessment in 2019: “Limited information is available about how U.S. assistance improved prosperity, governance, and security.”

One U.S.A.I.D. evaluation of programs intended to help Guatemalan farmers found that from 2006 to 2011, incomes rose less in the places that benefited from U.S. aid than in similar areas where there was no intervention.

Mexico has pushed for a more radical approach, urging the United States to give cash directly to Central Americans affected by two brutal hurricanes last year. But there’s also a clear possibility — that some may simply use the money to pay a smuggler for the trip across the border.

The farmers of San Antonio Huista say they know quite well what will keep their children from migrating. Right now, the vast majority of people here make their money by selling green, unprocessed coffee beans to a few giant Guatemalan companies. This is a fine way to put food on the table — assuming the weather cooperates — but it doesn’t offer much more than subsistence living.

Farmers here have long dreamed of escaping that cycle by roasting their own coffee and selling brown beans in bags to American businesses and consumers, which brings in more money.

“Instead of sending my brother, my father, my son to the United States, why not send my coffee there, and get paid in dollars?” said Esteban Lara, the leader of a local coffee cooperative.

But when they begged a U.S. government program for funding to help develop such a business, Ms. Monzón said, they were told “the money is not designed to be invested in projects like that.”

These days, groups of her neighbors are leaving for the United States every month or two. So many workers have abandoned this town that farmers are scrambling to find laborers to harvest their coffee.

One of Ms. Monzón’s oldest employees, Javier López Pérez, left with his 14-year-old son in 2019, during the last big wave of Central American migration to the United States. Mr. López said he was scaling the border wall with his son when he fell and broke his ankle.

“My son screamed, ‘Papi, no!’ and I said to him, ‘Keep going, my son,’” Mr. López said. He said his son made it to the United States, while he returned to San Antonio Huista alone.

His family was then kicked out of their home, which Mr. López had given as collateral to the person who smuggled him to the border. The house they moved into was destroyed by the two hurricanes that hit Guatemala late last year.

Ms. Monzón put Mr. López in one of her relatives’ houses, then got the community to cobble together money to pay for enough cinder blocks to build the family a place to live.

While mixing cement to bind the blocks together, one of Mr. López’s sons, Vidal, 19, confessed that he had been talking to a smuggler about making the same journey that felled his father, who was realistic at the prospect.

“I told him, ‘Son, we suffered hunger and thirst along the way, and then look at what happened to me, look at what I lost,’” Mr. López said, touching his still-mangled ankle. “But I can’t tell him what to do with his life — he’s a man now.”

J.T. Brown #23 of the Tampa Bay Lightning skates into goalie Henrik Lundqvist #30 of the New York Rangers during the second period in Game Six of the … END_OF_DOCUMENT_TOKEN_TO_BE_REPLACED

The Mississippi River town of Ste. Genevieve, MO, might be the ideal spot for a buyer in search of a refreshing idea.This mixed-use structure on the … END_OF_DOCUMENT_TOKEN_TO_BE_REPLACED