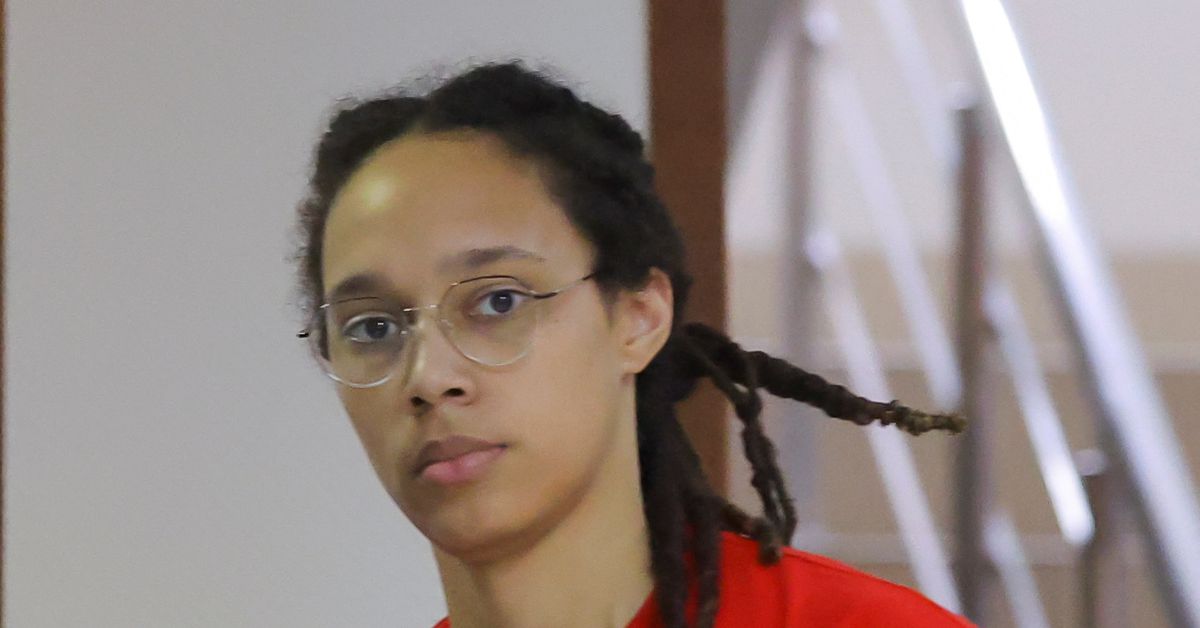 KHIMKI, Russia, July 7 (Reuters) – U.S. basketball star Brittney Griner pleaded guilty to a drugs charge in a Russian court on Thursday but denied she had intentionally broken the law.

Griner was speaking at the second hearing of her trial on a narcotics charge that carries a sentence of up to 10 years in prison, days after she urged U.S. President Joe Biden to secure her release. read more

“I’d like to plead guilty, your honour. But there was no intent. I didn’t want to break the law,” Griner said, speaking quietly in English which was then translated into Russian for the court.

“I’d like to give my testimony later. I need time to prepare,” she added.

The next court hearing was scheduled for July 14.

Griner’s lawyers told reporters they were hoping for the most lenient sentencing possible, taking into account “the nature of her case, the insignificant amount of the substance and BG’s personality and history of positive contributions to global and Russian sport.”

“We, as her defense, explained to her the possible consequences. Brittney stressed that she committed the crime out of carelessness, getting ready to board a plane to Russia in a hurry, not intending to break Russian law,” said Griner’s attorney, Maria Blagovolina, a partner at Rybalkin, Gortsunyan, Dyakin and Partners law firm.

“We certainly hope this circumstance, in combination with the defence evidence, will be taken into account when passing the sentence, and it will be mild.”

Griner’s legal team said it expected the trial to conclude around the beginning of August: “Brittney sets an example of being brave.”

Griner, a two-time Olympic gold medallist, was detained in February at Moscow’s Sheremetyevo airport with vape cartridges containing hashish oil, which is illegal in Russia, and has been kept in custody since.

The WNBA’s players association released a statement reiterating its support for the eight-time All-Star.

Griner will be recognised as an honorary starter at this weekend’s WNBA All-Star Game.

“The WNBA continues to work diligently with the U.S. State Department, the White House, and other allies in and outside government to get Brittney home safely and as soon as possible,” said WNBA Commissioner Cathy Engelbert.

The White House said Griner’s guilty plea would have no impact on U.S. negotiations to bring her home.

U.S. basketball player Brittney Griner, who was detained in March at Moscow’s Sheremetyevo airport and later charged with illegal possession of cannabis, is escorted before a court hearing in Khimki, outside Moscow, Russia July 7, 2022. REUTERS/Evgenia Novozhenina

In a handwritten note, Griner appealed to Biden directly earlier this week to step up U.S. efforts to bring her home.

“I realize you are dealing with so much, but please don’t forget about me and the other American detainees…” Griner wrote. “Please do all you can to bring us home.”

Biden spoke to Griner’s wife on Wednesday, telling her he was working to have the basketball star released “as soon as possible”, the White House said. read more

Officials from the U.S. Embassy in Moscow attended Griner’s trial and delivered a letter to her from Biden, U.S. Secretary of State Antony Blinken said.

“We will not relent until Brittney, Paul Whelan and all other wrongfully detained Americans are reunited with their loved ones,” he tweeted, referring to former U.S. Marine Whelan who has been imprisoned in Russia since 2018 on espionage charges.

U.S. officials and many athletes have called for the release of Griner – or “BG” as she is known to basketball fans – who they say has been wrongfully detained.

Her case has prompted concerns that Moscow could use it as leverage to negotiate the release of a high-profile Russian citizen in U.S. custody.

Griner, a centre for the Phoenix Mercury in the Women’s National Basketball Association, had played for UMMC Ekaterinburg in the Russian Women’s Basketball Premier League to boost her income during the WNBA off-season, like several other U.S. players.

Russian authorities say there is no basis to consider Griner’s detention illegal and that the case against her is not political despite Moscow’s fraught relations with the United States over the Russian military intervention in Ukraine.

Moscow’s Deputy Foreign Minister Sergei Ryabkov said on Thursday that it was difficult to exchange prisoners with the United States and suggested Washington stop talking about the fate of Griner. read more

Asked about Ryabkov’s remarks, the State Department said it would not comment on speculation.

“Using the practice of wrongful detention as a bargaining chip represents a threat to the safety of everyone traveling, working and living abroad. The United States opposes this practice everywhere,” a State Department spokesperson said.

The Russian foreign ministry has said Griner could appeal her sentence or apply for clemency once a verdict has been delivered.

ROSWELL, Ga.--(BUSINESS WIRE)--Berkshire Hathaway HomeServices Georgia Properties, one of the largest and most successful real estate organizations in … END_OF_DOCUMENT_TOKEN_TO_BE_REPLACED

The real estate market seems to have a split personality.On the positive side for homebuyers, the number of properties for sale shot up by a … END_OF_DOCUMENT_TOKEN_TO_BE_REPLACED

Kim Tae-Ri plays a gun-toting time traveler in 'Alienoid.' Well Go USA Director Choi Dong-hoon likes a challenge. That much is apparent in his latest … END_OF_DOCUMENT_TOKEN_TO_BE_REPLACED