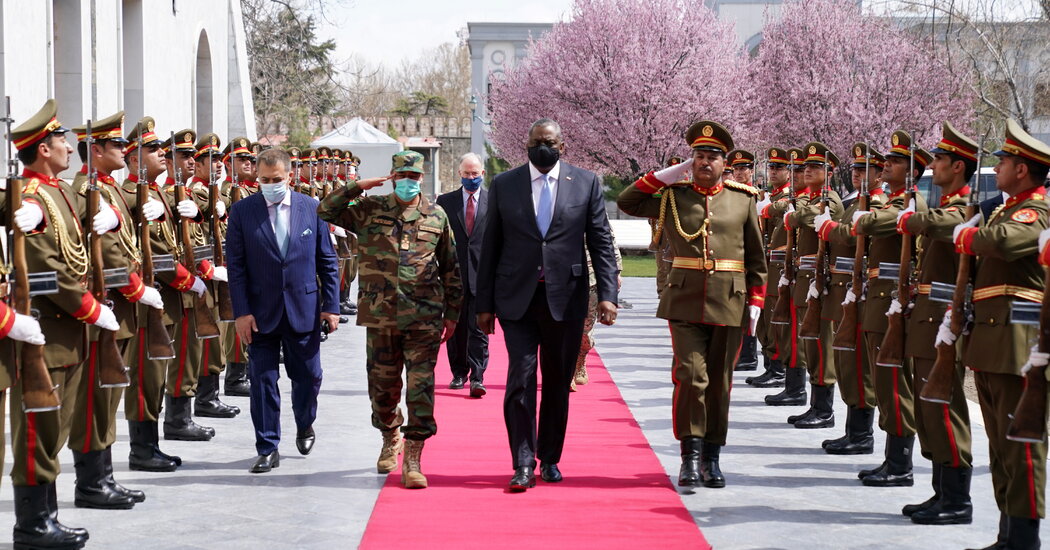 The United States is tentatively set to withdraw American forces from the country on May 1, the date set in an agreement signed by the Trump administration and the Taliban more than a year ago.

Speaking to reporters before his departure from Afghanistan, Mr. Austin declined to comment on whether the Taliban had met their obligations under that agreement, which would trigger the departure of U.S. forces from a country where they have had a continuous presence since 2001.

“It’s obvious that the level of violence remains pretty high in the country,” Mr. Austin said. “We’d really like to see that violence come down, and I think if it does come down it can begin to set the conditions for some really fruitful diplomatic work.”

that meeting the deadline would be “tough.” On Saturday, speaking with reporters in India, Mr. Austin expressed confidence that he could remove all remaining U.S. troops from Afghanistan by May 1, should the president direct him to do so.

The defense secretary’s visit to Afghanistan came at the end of more than a week of travel across the Pacific during which he reassured allies that they would have the United States’ support in countering potential threats from China.

First, at U.S. Indo-Pacific Command in Hawaii, the secretary was briefed by Adm. Philip S. Davidson on various threats in the region and how American military assets have been deployed in response. Flying next to Japan and South Korea, Mr. Austin joined Secretary of State Antony J. Blinken for talks with the foreign and defense ministers of both nations.

Both secretaries emphasized the Biden administration’s stance that diplomacy would again be the United States’ first course of action in foreign affairs.

In New Delhi, where Mr. Austin met Prime Minister Narendra Modi and the defense minister, Rajnath Singh, senior U.S. defense officials said that Indian leaders spoke mostly about their concerns regarding China. It was only toward the end of their talks that the issue of Pakistan — India’s neighbor and traditional main enemy — came up.

The trip, Mr. Austin’s first as a cabinet member, comes as President Biden seeks to build a series of security agreements with various nations who could band together to respond to Chinese military operations in the South and East China Seas.

One such agreement between the United States, Australia, Japan and India — called “the quad” — was repeatedly cited by both Mr. Austin and Mr. Blinken as a model for combined military operations in region. Mr. Austin did not ask South Korea to join the quad during his time in Seoul, according to a senior defense official.

Mr. Austin’s trip to Kabul was kept secret, and was to remain confidential until two hours after he left, but local reporters broke news of his visit after he met with President Ashraf Ghani.

The secretary’s arrival in Kabul came on Nowruz, the Persian new year — a date on which the Islamic State in Afghanistan had pledged to carry out attacks. That led the Pentagon to keep the secretary’s visit under wraps as long as possible.

After landing in Kabul, Mr. Austin boarded a U.S. Army Black Hawk helicopter for a brief flight to the headquarters of the American military mission. Just off the former soccer stadium that serves as the command’s heliport, Gen. Austin S. Miller, the American commander in Afghanistan, quickly walked Mr. Austin through a warren of small buildings and tall concrete blast walls to his office.

Mr. Austin told reporters that he had no particular message that he conveyed to President Ghani, preferring instead to listen to the Afghan president’s thoughts on the situation in his country.

“We’ve done a lot to work with the Afghan security forces,” Mr. Austin said in response to a question regarding concerns Afghans might have following a U.S. withdrawal. “And I don’t want to speculate about what could happen or what could not happen going forward.”

GREENVILLE, N.C.--(BUSINESS WIRE)--Employers aiming to win the war on talent have a new “A” team to tap into: college and professional athletes. … END_OF_DOCUMENT_TOKEN_TO_BE_REPLACED

Mortgage rates are likely to rise in July, extending a seven-month streak. High inflation, and the Federal Reserve's efforts to control it, have … END_OF_DOCUMENT_TOKEN_TO_BE_REPLACED