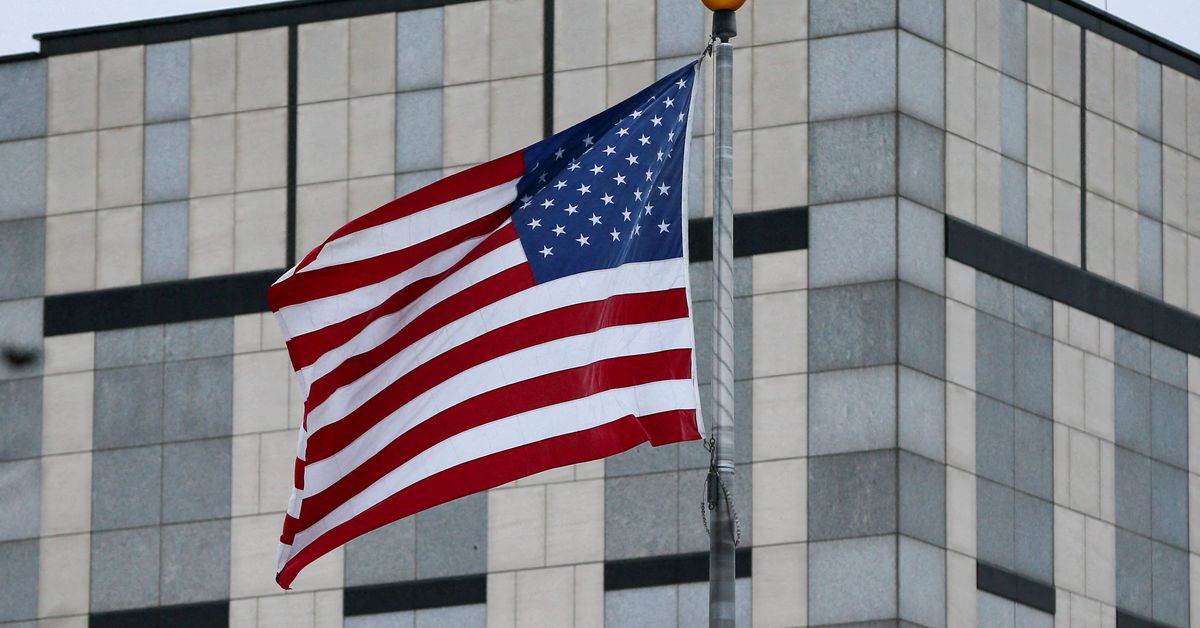 A flag waves in the wind at the U.S. embassy in Kyiv, Ukraine January 24, 2022. REUTERS/Gleb Garanich

Jan 26 (Reuters) – The U.S. Embassy in Kyiv urged American citizens in Ukraine to consider departing now, saying that the security situation in the country was “unpredictable due to the increased threat of Russian military action.”

The security situation in Ukraine “can deteriorate with little notice”, the embassy said on its website on Wednesday.

In Washington, Secretary of State Antony Blinken said the U.S. Embassy in Kyiv would remain open but added that Americans in the former Soviet country should “strongly consider leaving.”

Earlier this week, the United States urged its citizens not to travel to Ukraine.

U.S. President Joe Biden said on Tuesday that personal sanctions on Russian President Vladimir Putin, though a rare step, could be considered as part of a drive by Washington and its allies to convince Moscow that any new aggression against Ukraine would have swift and massive costs.

Russia warned on Wednesday that imposing sanctions on Putin personally would not hurt him but would be “politically destructive.”

Russia has gathered tens of thousands of troops near its border with Ukraine but has denied that it plans to invade.

The United States has spent weeks trying to build agreement with European partners on a strong sanctions package if Russia attacks.

Reporting by Kanishka Singh in Bengaluru; Editing by Howard Goller

AUSTIN, Texas--(BUSINESS WIRE)--As the first multifamily management company to be recognized in the Public Relations and Marketing Excellence Awards, … END_OF_DOCUMENT_TOKEN_TO_BE_REPLACED

There have been whispers of cooling housing and rental prices in the San Francisco Bay Area, but that hasn't yet translated into practical, noticeable … END_OF_DOCUMENT_TOKEN_TO_BE_REPLACED

Cars pass in Independence Square at twilight in Kyiv, Ukraine, Monday, Oct. 31, 2022. Rolling ... [+] blackouts are increasing across Ukraine as the … END_OF_DOCUMENT_TOKEN_TO_BE_REPLACED