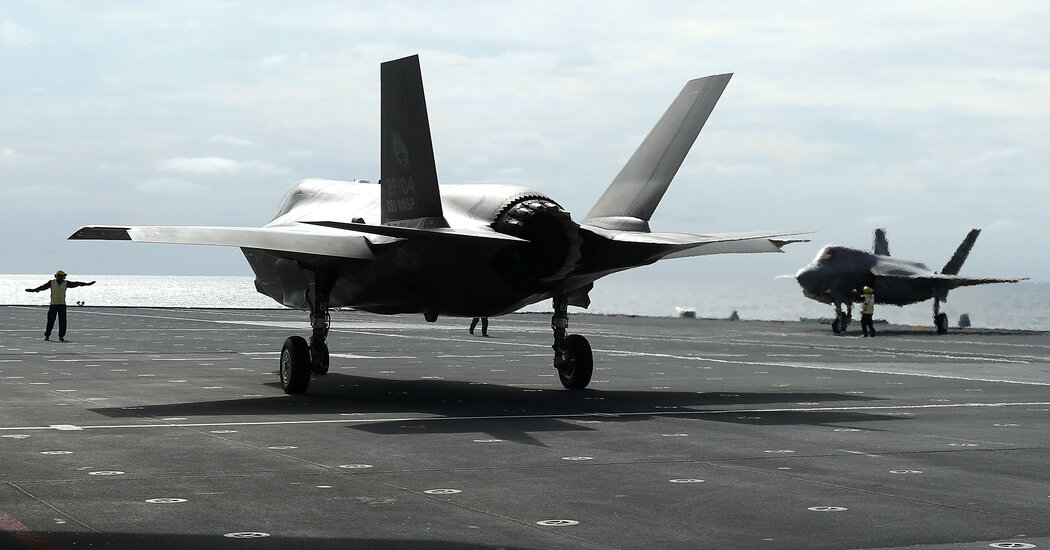 WASHINGTON — The Biden administration plans to suspend the sale of many offensive weapons to Saudi Arabia approved under the Trump administration, but it will allow the sale of other matériel that can be construed to have a defensive purpose, U.S. officials said on Wednesday.

The plan, which was briefed to Congress last week, is part of an administration review of billions of dollars in arms sales to Saudi Arabia and the United Arab Emirates that the White House announced soon after President Biden’s inauguration.

The original sales were met with strong opposition last year from Democrats in Congress, who are angry over the countries’ involvement in the war in Yemen and wary of the transfer of advanced military technology to authoritarian Middle Eastern states with ties to China.

The Biden administration will approve $23 billion in weapons sales to the United Arab Emirates, according to a State Department spokesman, including F-35 fighter jets and armed Reaper drones. Biden administration officials signaled at the time of the review that those arms, sold to the Emirates soon after it had signed a diplomatic agreement with Israel brokered by the Trump administration, were likely to be approved.

killings of civilians, including many children, because of the use of such bombs by the Saudi-led coalition.

Raytheon Company, the biggest supplier of the bombs, lobbied the Trump administration to continue the sales, despite a growing outcry from humanitarian groups, members of Congress and some in the State Department.

The suspension does not cover sales of any other kinds of weapons to Saudi Arabia, U.S. officials said. Weapons used by helicopters would still be permitted, as well as ground-to-ground munitions and small arms. Electronics equipment, including jamming technology, would also be permitted. The Saudi military receives almost all its weapons from the United States.

formally notified lawyers about the decision, which officials say was made this year as part of a lawsuit opposing the agreement brought by the nonprofit New York Center for Foreign Policy Affairs.

The Emirates played a big role in the Yemen war but stepped back recently. As part of negotiations last year to try to persuade the Emirates to normalize relations with Israel, the Trump administration told Emirati officials that it would accelerate approval of sales of F-35 fighter jets and drones.

U.S. officials said on Wednesday that Secretary of State Antony J. Blinken received the report this week from other offices in the State Department, and that he was expected to approve it. The report would then go to the National Security Council for final approval.

“I and many other House members remain concerned about the proposed sale of $23 billion in arms to the U.A.E.,” said Representative Gregory W. Meeks, Democrat of New York and the chairman of the House Foreign Affairs Committee. He said he had “many questions about any decision by the Biden administration to go forward with the Trump administration’s proposed transfers” of the fighter jets, drones and munitions to the Emirates.

Israeli officials and some members of Congress have expressed concerns that the sales of F-35s would weaken what they called Israel’s “qualitative military edge” over other countries in the region, and that Congress requires presidential administrations to maintain it as a matter of law. Israel is currently the only country in the region with F-35s.

Other U.S. officials have been concerned about selling the F-35, one of the military’s most advanced pieces of hardware, to the United Arab Emirates when it is developing a closer relationship with China, which is notorious for technological espionage. American officials are worried about the radar and stealth abilities of F-35s and some drone technology, among other things.

Ms. Fontenrose added that some officials had additional concerns that the Emirates might employ American-made weapons, including Reaper drones, in the Libyan civil war, where it has intervened. She said the Emirates had provided the Trump administration with “assurances” on that front.

The State Department official, who requested anonymity to discuss policies that had not been officially announced, noted that it would take years to complete the Emirati arms deal and that during that period the administration would ensure that the country was living up to obligations, such as to protect American technology and to ensure that U.S. arms were not used in contexts that violate human rights and the laws of conflict.

Mr. Meeks echoed that point. “Fortunately, none of these transfers would occur anytime soon,” he said, “so there will be ample time for Congress to review whether these transfers should go forward and what restrictions and conditions would be imposed.”

Mr. Trump’s deal with the Emirates was approved soon after it had agreed to join the Abraham Accords, which normalized its diplomatic relations with Israel for the first time.

Some Democrats complained that the arms sales appeared to have been an inappropriate inducement for the Emirates to agree to the accords, which largely formalized a relationship that had grown steadily friendlier for many years.

“I still don’t believe it’s in our interest to fuel a spiraling arms race in the Middle East,” said Senator Christopher S. Murphy, Democrat of Connecticut and a leading critic in Congress of the arms sales and of U.S. ties to Gulf Arab states. “I have requested a briefing from the administration regarding the status of the review of both the U.A.E. and Saudi sales.”

AUSTIN, Texas--(BUSINESS WIRE)--As the first multifamily management company to be recognized in the Public Relations and Marketing Excellence Awards, … END_OF_DOCUMENT_TOKEN_TO_BE_REPLACED

There have been whispers of cooling housing and rental prices in the San Francisco Bay Area, but that hasn't yet translated into practical, noticeable … END_OF_DOCUMENT_TOKEN_TO_BE_REPLACED

Cars pass in Independence Square at twilight in Kyiv, Ukraine, Monday, Oct. 31, 2022. Rolling ... [+] blackouts are increasing across Ukraine as the … END_OF_DOCUMENT_TOKEN_TO_BE_REPLACED