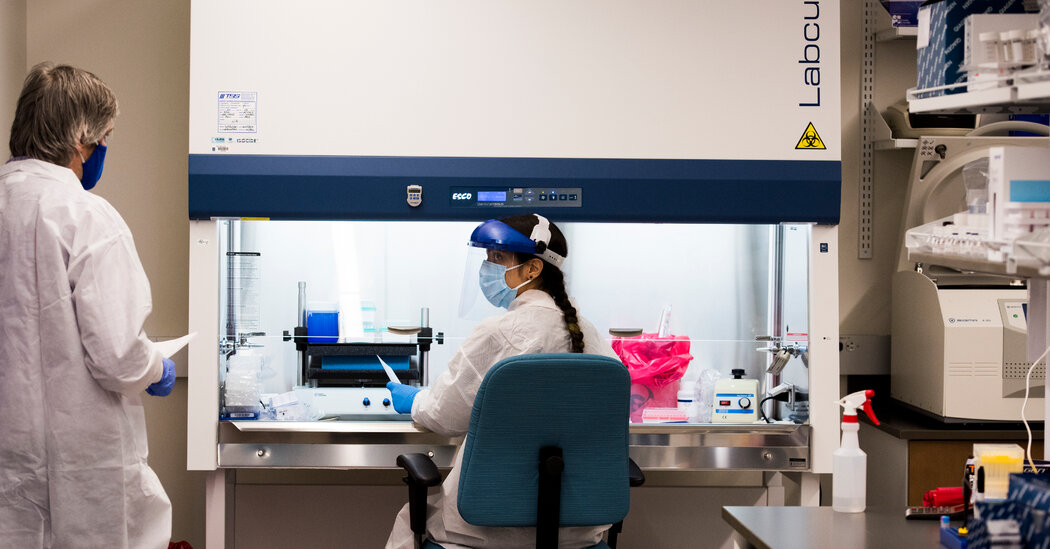 The Centers for Disease Control and Prevention has been warning about it since January: A more contagious and possibly deadlier variant of the coronavirus, first found in Britain, is likely to become predominant in the United States, perhaps leading to a wrenching surge in cases and deaths.

The first part of that warning seems to be coming true: The variant, known as B.1.1.7, is doubling its share of all new U.S. cases about every 10 days.

But the second part is harder to make out, at least so far. The steep fall in new cases from the January peak halted in mid-February, but the trend since then has been roughly steady or only slightly downward, rather than a feared “fourth wave.”

Experts are not sure why. The accelerating pace of vaccinations and the remaining virus-control measures in much of the country might be balancing out the spread of the more contagious variant, so that total cases neither rise nor fall very much. But it is difficult to know how long that equilibrium might last, or whether the next clear turn in the trend will be upward or downward.

New York Times database. That is the lowest seven-day average since October and about 10 percent below the average on Feb. 21, when the steep decline slowed. Still, the figure is close to the peak level of the surge last summer. Death reports are also falling but remain high, regularly topping 2,000 a day.

In an interview Sunday on the CBS program “Face the Nation,” Dr. Fauci said that over the past week and a half, the decline in cases had stalled. “We’re plateauing at quite a high level — 60 to 70,000 new infections per day is quite high,” he said.

This trend is particularly worrisome, he said, because in the United States over the past year, when the daily level of new infections plateaued at a high level, surges in cases followed. And recently in Europe, infection levels were declining, then plateaued and “over the last week or so, they’ve had about a 9 percent increase in cases,” Dr. Fauci said.

Experts say they need more data to understand why the United States has not yet seen a surge in cases as the fearsome B.1.1.7 variant has spread so rapidly, already accounting for more than one-fifth of new cases.

William Hanage, a Harvard epidemiologist, said there could be several reasons B.1.1.7 has not started ravaging the United States the way it consumed Britain, including more widespread vaccination, improving weather and the patchwork of pandemic restrictions across the states.

Florida, Mr. Hanage and other experts say, is an interesting example, because infections have not surged even though restrictions are looser than in other states and the variant makes up at least an estimated 30 percent of cases, the highest proportion in the nation.

Dr. Fauci said on Sunday that a variant first identified in New York is “not widespread yet, but it seems to be spreading pretty efficiently through the New York City metropolitan area and beyond.”

He said there is evidence that the variant may partly elude protection conferred by vaccines and monoclonal antibody treatments, although the variant does not evade vaccines and treatments as much as one first identified in South Africa.

The best way to prevent further spread is to “get people vaccinated as quickly and as expeditiously as possible and, above all, maintain the public health measures that we talk about so often: the masking, the physical distancing, and the avoiding of congregate settings, particularly indoors.” Dr. Fauci said. “That’s what you can do to prevent the spread of a worrisome variant.”

GREENVILLE, N.C.--(BUSINESS WIRE)--Employers aiming to win the war on talent have a new “A” team to tap into: college and professional athletes. … END_OF_DOCUMENT_TOKEN_TO_BE_REPLACED

Mortgage rates are likely to rise in July, extending a seven-month streak. High inflation, and the Federal Reserve's efforts to control it, have … END_OF_DOCUMENT_TOKEN_TO_BE_REPLACED