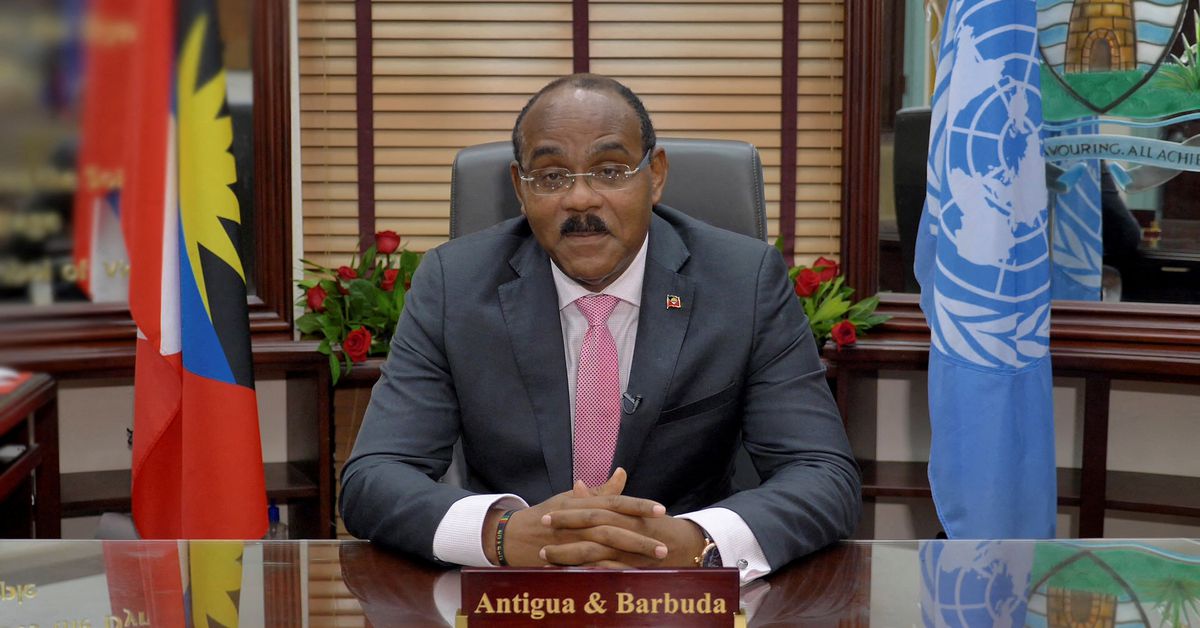 MIAMI, Jan 26 (Reuters) – The United States should increase financing and aid to the Caribbean to help the region recover from the pandemic and cope with the growing impact of climate change, Antigua and Barbuda Prime Minister Gaston Browne said in an interview.

Countries in the region are facing unsustainable debt loads often equivalent to 100% of gross domestic product (GDP), Browne said, adding that many have been relying on loans from China due to favorable terms offered by Chinese banks.

“I feel that the U.S. ought to pay more attention to the Caribbean region in helping us to maintain our standard of living to avoid any mass movement of people,” he said in a telephone interview on Tuesday.

“If people are unable to live in (Caribbean) countries, then clearly they’ll end up on the shores of the United States as refugees.”

China has lent over $4 billion to Caribbean nations in the last 10 years, according to figures compiled by the Washington-based Inter-American Dialogue, much of which has gone to finance infrastructure development.

The conditions of those loans are more favorable than even those provided by multilateral agencies such as the International Monetary Fund (IMF), Browne said, adding that borrowing from Chinese banks should not be understood as a political statement.

The U.S. State Department did not immediately reply to a request for comment.

The Caribbean was disproportionately affected by the COVID-19 pandemic, according to the IMF, which last year said tourism-dependent countries in the region saw economies contract by 9.8% in 2020.

Many struggle to get aid because multilateral agencies tend to classify them as a middle- or high-income nations based on per-capita GDP measurements, which do not factor in the higher costs facing small island nations or their vulnerability to climate change.

Sustained U.S. support for changing those criteria would provide a significant boost for the Caribbean, Browne said.

“We expect the United States would use its influence in the multinational financial institutions to effect that change,” Browne said, adding he had not seen evidence that this was happening.

The vast majority of some $336 million in U.S. aid to members of the Caribbean Community, or Caricom, goes to Haiti, with only around $70 million being distributed among 13 other countries, he said. The population of those countries is around 7.5 million.

Antigua and Barbuda, a nation of two main islands and several smaller ones in the northeastern Caribbean, has, like other countries in the region, faced growing expenses associated with extreme weather events.

Hurricane Irma in 2017 ravaged Barbuda, leaving all buildings uninhabitable and forcing the evacuation of all residents for nearly 18 months. Reconstruction costs were in excess of $200 million.

Reporting by Brian Ellsworth in Miami; editing by Jonathan Oatis

AUSTIN, Texas--(BUSINESS WIRE)--As the first multifamily management company to be recognized in the Public Relations and Marketing Excellence Awards, … END_OF_DOCUMENT_TOKEN_TO_BE_REPLACED

There have been whispers of cooling housing and rental prices in the San Francisco Bay Area, but that hasn't yet translated into practical, noticeable … END_OF_DOCUMENT_TOKEN_TO_BE_REPLACED

Cars pass in Independence Square at twilight in Kyiv, Ukraine, Monday, Oct. 31, 2022. Rolling ... [+] blackouts are increasing across Ukraine as the … END_OF_DOCUMENT_TOKEN_TO_BE_REPLACED