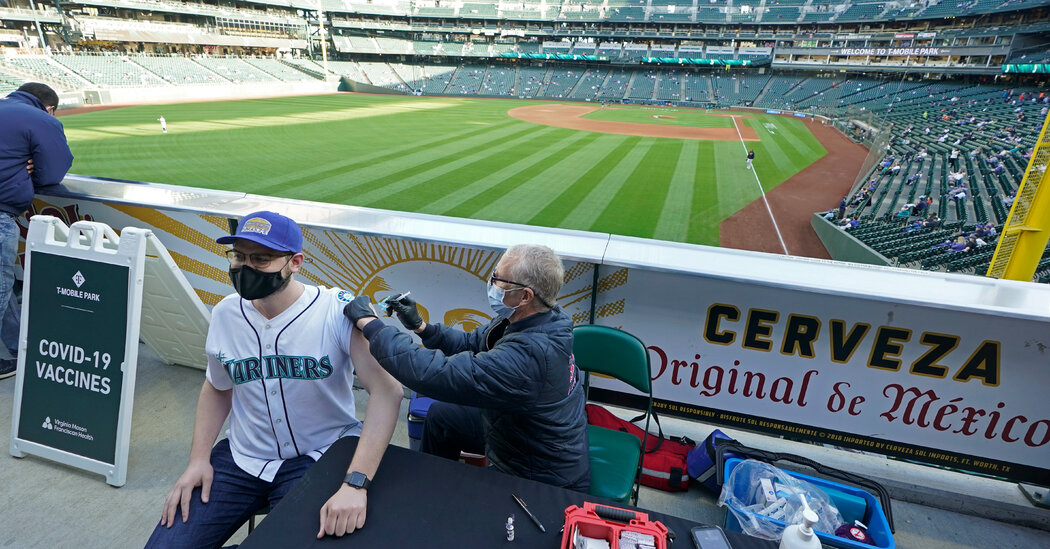 Several states are turning away Covid vaccine doses from their federal government allocations, as the daily average of coronavirus vaccine doses administered across the United States has fallen below two million for the first time since early March. Experts say the states’ smaller requests reflect a steep drop in vaccine demand in the United States.

North Carolina, South Carolina, Washington State and Connecticut are also scaling back on their vaccine requests.

As demand falls and the spread of the virus slows in the United States, the Biden administration is under increasing pressure to share vaccine doses with countries like India, which has been ravaged by a catastrophic surge. About 83 percent of shots have been administered in high- and upper-middle-income countries, while only 0.3 percent of doses have been given in low-income countries.

normal refrigeration temperatures for at least three months, making its distribution considerably easier. But allocations of that have remained low nationally after a pause over extremely rare cases of blood clots was lifted last month, and that has contributed to the drop in vaccinations being given more broadly.

shifted the administration’s strategy to battle the pandemic. Changes include creating a federal stockpile of vaccine doses to given to states as needed, instead of strictly by population, and investing millions in community outreach to target underserved communities, younger Americans and those hesitant to get shots.

Mass vaccination sites will wind down in favor of smaller settings. Pharmacies will allow people to walk in for shots, and pop-up and mobile clinics will distribute vaccines, especially in rural areas. Federal officials also plan to enlist the help of family doctors and other emissaries who are trusted voices in their communities.

Dr. Adalja suggested that federal health guidance should take care to avoid “underselling the vaccine” as the nation tries to get more people vaccinated. Guidance on issues such as traveling and mask-wearing can be loosened “aggressively” for vaccinated people, Dr. Adalja said. “They seem to be several steps behind what infectious disease doctors like myself are telling people that are fully vaccinated what they can do.”

Experts warn that states where vaccinations are falling behind — particularly in the South — could be especially prone to outbreaks in the weeks ahead as more contagious virus variants spread. Texas and North Carolina are trailing the national average in vaccinations, with about 40 percent of people receiving at least one shot. In Alabama, Mississippi and Louisiana, about a third of residents have gotten their first shot.

It’s a property that offers a unique open floor plan—plus a hot tub with a view.“It was a Methodist church located in a historic little area of St. … END_OF_DOCUMENT_TOKEN_TO_BE_REPLACED