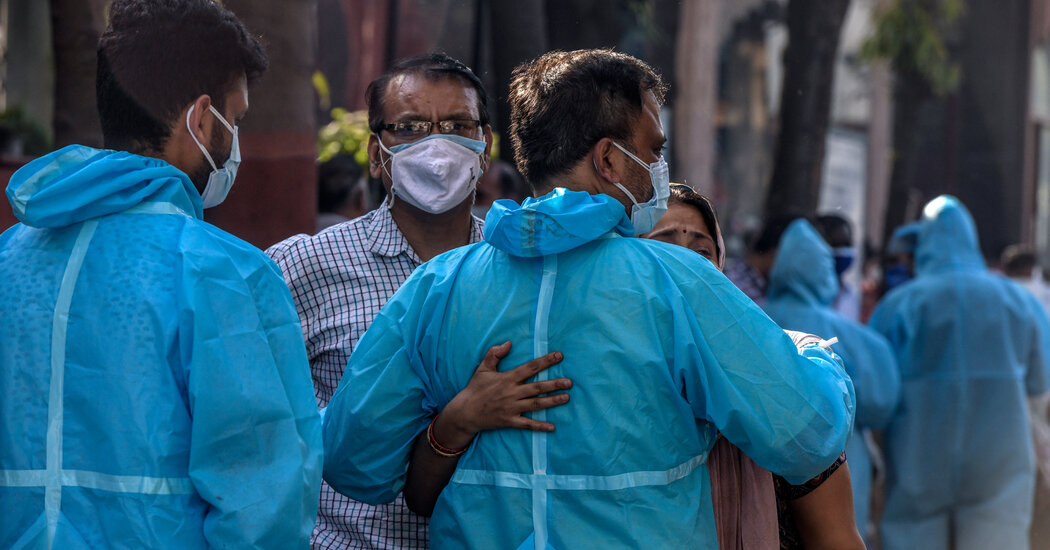 WASHINGTON — The Biden administration, under increasing pressure to address a devastating surge of the coronavirus in India, said on Sunday that it had partially lifted a ban on the export of raw materials for vaccines and would also supply India with therapeutics, rapid diagnostic test kits, ventilators and personal protective gear.

“Just as India sent assistance to the United States as our hospitals were strained early in the pandemic, the United States is determined to help India in its time of need,” Emily Horne, a spokeswoman for the National Security Council, said in a statement on Sunday.

The announcement, an abrupt shift for the administration, came after Jake Sullivan, President Biden’s national security adviser, held a call earlier in the day with Ajit Doval, his counterpart in India, and as the Indian government reported more than 349,000 new infections, a world record for a single day. Ms. Horne said the United States had “identified sources of specific raw material urgently required for Indian manufacture of the Covishield vaccine,” the Indian-produced version of the AstraZeneca vaccine.

The situation in India is dire. The country is witnessing perhaps the worst crisis any nation has suffered since the pandemic began, with hospitals overflowing and desperate people dying in line waiting to see doctors — and mounting evidence that the actual death toll is far higher than officially reported. Officials say they are running desperately low on supplies, including oxygen and protective gear, as a deadly new variant is thought to be behind a rise in cases.

New York Times database — even though India is producing two vaccines on its own soil.

Yet even as horrifying images of strained hospitals and orange flames from mass cremation sites circulated around the world last week, administration officials had pushed back as pressure mounted for the United States to broaden its effort to combat the surge in India. For Mr. Biden, the crisis in India amounts to a clash of competing forces. The president came into office vowing to restore America’s place as a leader in global health, and he has repeatedly said the pandemic does not stop at the nation’s borders.

But he is also grappling with the legacy of his predecessor’s “America First” approach, and he must weigh his instincts to help the world against the threat of a political backlash for giving vaccines away before every American has had a chance to get a shot. As of Sunday, 28.5 percent of Americans were fully vaccinated, and 42.2 percent had had at least one dose, according to the Centers for Disease Control and Prevention.

“We’re going to start off making sure Americans are taken care of first, but we’re then going to try and help the rest of the world,” Mr. Biden said last month, after he committed to providing financial support to help Biological E, a major vaccine manufacturer in India, produce at least one billion doses of coronavirus vaccines by the end of 2022.

But Mr. Biden’s commitments have gone only so far. India and South Africa have asked the World Trade Organization for a temporary waiver to an international intellectual property agreement that would give poorer countries easier access to generic versions of coronavirus vaccines and treatments. The administration is blocking that request.

Tens of millions of doses of the AstraZeneca vaccine are sitting stockpiled in the United States, and Mr. Biden said last week that he was considering sharing more. But the vaccine was manufactured at the Emergent BioSolutions plant in Baltimore, where production has been halted amid concerns about possible contamination.

“We’re looking at what is going to be done with some of the vaccines that we are not using,” the president said on Wednesday. “We’ve got to make sure they are safe to be sent.”

The statement on Sunday did not mention the possibility of the United States directly sending vaccines to India. But in an appearance on ABC’s “This Week” on Sunday, Dr. Anthony S. Fauci, the nation’s leading infectious disease expert, said the United States would consider sending some doses of the AstraZeneca vaccine there.

“I don’t want to be speaking for policy right now with you, but, I mean, that’s something that certainly is going to be actively considered,” Dr. Fauci said.

India is home to the Serum Institute of India, the world’s largest vaccine maker. But vaccine production has lagged behind the needs of India’s 1.3 billion people. Adar Poonawalla, the institute’s chief executive, appealed to Mr. Biden in mid-April over Twitter.

would not lift its ban, Ned Price, the State Department spokesman, told reporters that “the United States first and foremost is engaged in an ambitious and effective and, so far, successful effort to vaccinate the American people.”

The resistance was met with criticism from Indian politicians and health experts.

“By stockpiling vaccines & blocking the export of crucial raw materials needed for vaccine production, the United States is undermining the strategic Indo-US partnership,” Milind Deora, a politician from Mumbai, one of the hardest-hit cities, said on Twitter.

In addition to assisting India with protective gear and raw materials, Ms. Horne said on Sunday that the United States would deploy a team of public health advisers from the Centers for Disease Control and Prevention.

If you’ve ever dreamed of a quiet life on a boat in Alaska, this new waterfront listing can help you realize that vision.Of course, there's always … END_OF_DOCUMENT_TOKEN_TO_BE_REPLACED