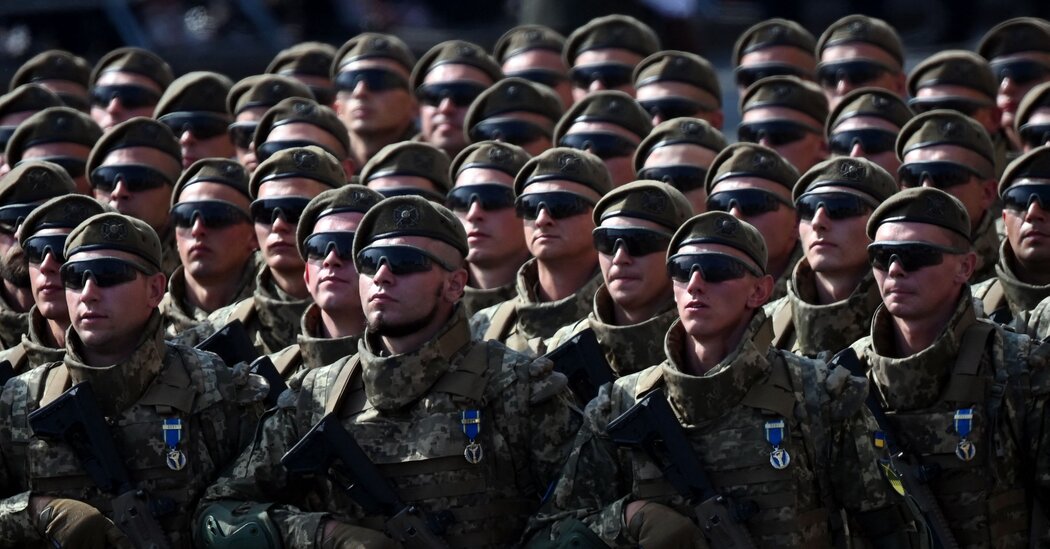 KYIV, Ukraine — On the 30th anniversary of the founding of Ukraine’s armed forces this week, the country’s president, Volodymyr Zelensky, donned a helmet and flak jacket to tour the trenches and announced with great fanfare the delivery of new tanks, armored vehicles and ships to frontline units engaged in fighting Russian forces and Kremlin-backed separatists.

While the weapons systems may help to maintain parity in the slow-moving war of attrition that has prevailed for years, neither they nor anything else the Ukrainian military can now muster would be sufficient to repel the full-on Russian assault that Ukrainian and Western officials say Moscow appears to be preparing. With nearly 100,000 troops now massed across Ukraine’s eastern, northern and southern borders and more on the way, even the Ukrainian officials responsible for their country’s defense acknowledge that without a significant influx of resources, their forces do not stand much of a chance.

“Unfortunately, Ukraine needs to be objective at this stage,” said Gen. Kyrylo O. Budanov, the head of Ukraine’s military intelligence service. “There are not sufficient military resources for repelling a full-scale attack by Russia if it begins without the support of Western forces.”

General Budanov outlined his nightmare vision of a Russian invasion that would begin with airstrikes and rocket attacks aimed initially at ammunition depots and trench-bound troops. Very quickly, he said, the Ukrainian military would be incapacitated, its leadership unable to coordinate a defense and supply the front. After that, he said, responsibility would fall to frontline commanders to carry on the fight alone.

a video call with President Biden on Tuesday, Mr. Putin dismissed concerns about the troop buildup on Ukraine’s border, shifting blame to the United States and NATO, which he accused of threatening Russia’s security by supporting Ukraine’s military with arms and training.

“The Russian troops are on their own territory,” an adviser to Mr. Putin, Yuri V. Ushakov, said in a briefing with reporters after the presidents had spoken. “They don’t threaten anyone.”

Still, the amassing of troops and heavy weaponry on the border has forced Ukrainian officials to face some hard truths in recent weeks. The U.S. intelligence community has assessed that Russia has devised plans for an offensive involving 175,000 troops.

delivered about 88 tons of ammunition, part of a $60 million military aid package pledged by the Biden administration.

On Wednesday, President Biden ruled out deploying U.S. forces to Ukraine to deter Russia. But there are more than 150 U.S. military advisers in Ukraine, a combination of U.S. Special Forces and National Guard, currently the Florida National Guard’s 53rd Infantry Brigade Combat Team, according to two U.S. Defense Department officials, who spoke on condition of anonymity to discuss sensitive troop deployments. About a dozen other NATO countries also have military advisers in Ukraine now, the officials said.

delivering a new cache of missiles in October. John F. Kirby, a Pentagon spokesman, said Wednesday that there were no conditions or restrictions placed on the Javelins, except that the Ukrainian forces use them “responsibly” and “in self-defense.”

interview with Radio Liberty this month, Gen. Oleksandr Pavlyuk, the commander of the Joint Operation Forces fighting the separatists, said the Javelins had already been deployed to military units in eastern Ukraine. A senior Ukrainian military official, speaking on condition of anonymity to discuss sensitive military issues, confirmed that Javelin missiles had been deployed to frontline military units a month ago, but had not yet been fired in battle.

“The Javelins are there, and if our enemies employ tanks they will be used,” the official said.

The Biden administration has remained vague about how else it might come to Ukraine’s defense in case of invasion.

In his video call with Mr. Putin on Tuesday, President Biden looked his counterpart in the eye and warned the United States would go beyond the economic punishments imposed on Russia after the 2014 seizure of Crimea should Mr. Putin decide to order military action, according to an account by Jake Sullivan, the president’s national security adviser. What those penalties might be were left unclear, though few expect the United States to commit significant military assistance beyond what has already been provided.

The lack of firm commitments from Ukraine’s Western backers are a source of consternation for Ukrainian officials.

“They need to decide, either we’re allies as they declare — and in that case allies help one another — or they need to say that this is not exactly the case,” said General Budanov, the military intelligence chief. “If the civilized world wants to avoid catastrophe — and this will be a catastrophe for everyone — we need military technical support now, not tomorrow, not the day after tomorrow, not in year. Now.”

Those who understand that such a level of support is unlikely have begun to speak darkly of popular armed resistance against any Russian occupation. In an interview, General Pavlyuk noted that Ukraine had up to half a million people with military experience. If the West does not come to Ukraine’s aid, he said, “we’ll start a partisan war.”

“Eight years have passed and there are very many people with military experience who are prepared with weapons in their hands to fight,” he said.

One senior Ukrainian military official who spoke on condition of anonymity said that if all else failed, the military would simply open its weapons depots and allow the Ukrainian people to take whatever they need to defend themselves and their families.

AUSTIN, Texas--(BUSINESS WIRE)--As the first multifamily management company to be recognized in the Public Relations and Marketing Excellence Awards, … END_OF_DOCUMENT_TOKEN_TO_BE_REPLACED

There have been whispers of cooling housing and rental prices in the San Francisco Bay Area, but that hasn't yet translated into practical, noticeable … END_OF_DOCUMENT_TOKEN_TO_BE_REPLACED

Cars pass in Independence Square at twilight in Kyiv, Ukraine, Monday, Oct. 31, 2022. Rolling ... [+] blackouts are increasing across Ukraine as the … END_OF_DOCUMENT_TOKEN_TO_BE_REPLACED