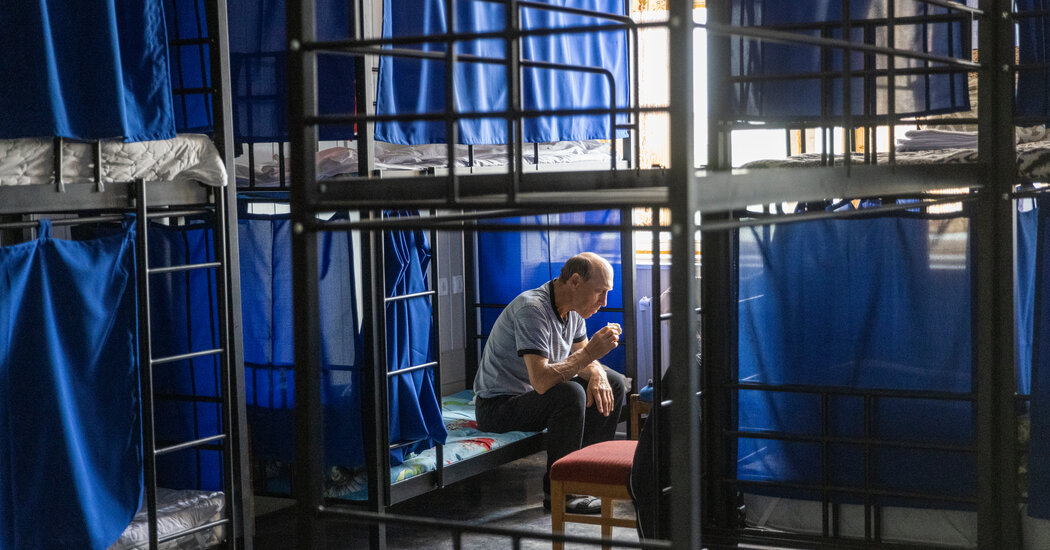 KYIV, Ukraine — The Crimean Peninsula dangles off Ukraine’s southern coast like a diamond, blessed with a temperate climate, expansive beaches, lush wheat fields and orchards stuffed with cherries and peaches.

It is also a critical staging ground for Russia’s invasion of Ukraine.

Connected via bridge to Russia and serving as a home to Moscow’s Black Sea Fleet, Crimea provides a vital link in the Russian military’s supply chain that supports tens of thousands of soldiers now occupying a vast swath of southern Ukraine.

For President Vladimir V. Putin, it is hallowed ground, having been declared part of Russia by Catherine the Great in 1783, helping pave the way for her empire to become a naval power. The Soviet ruler Nikita S. Khrushchev gave it to Ukraine in 1954. And because Ukraine was then a Soviet republic, not much changed.

But when the Soviet Union collapsed nearly four decades later, Russia lost its jewel. Mr. Putin thus claimed to be righting a historic wrong when he illegally annexed Crimea in 2014.

Mr. Putin promised at the time that he had no intention of further dividing Ukraine. Yet eight years later, in February, tens of thousands of Russian soldiers stormed north out of the peninsula, kicking off the current war.

In recent days, military targets in Crimea have come under attack, and the peninsula once again finds itself at the fulcrum of a great power struggle.

Early in the war, Russian troops surging from Crimea seized swaths of the Kherson and Zaporizhia regions that remain the key to Russia’s occupation of southern Ukraine.

Crimea, in turn, offers key logistical support for Russia to maintain its occupation army, including two main rail links that Russia relies on for moving heavy military equipment. Crimean air bases have been used to stage sorties against Ukrainian positions, and the peninsula has provided a launching ground for long-range Russian missiles.

The peninsula is also home to Russia’s Black Sea Fleet, helping Russia maintain dominion over the sea, including a naval blockade that has crippled Ukraine’s economy.

A Place in the Sun

Russia is cold — a fifth of the country is above the Arctic Circle. But it can be positively balmy in the sun-drenched Crimean city of Yalta.

“Russia needs its paradise,” wrote Prince Grigory Potemkin, Catherine the Great’s general and lover, when he urged her to claim the land.

Crimea is where czars and Politburo chairmen kept vacation homes. Before the West imposed sanctions on Russia for illegally annexing the peninsula, it was a place where wealthy Eastern Europeans went to unwind and party.

“Casinos buzz and ping everywhere amid the city’s pine-bowered alleyways,” a New York Times Travel article proclaimed about Yalta in 2006, adding: “Much — if not everything — goes in this seaside boomtown.”

Tourism fell steeply after 2014. But when explosions rang out at an air base last week near Crimea’s western coast, there were still visitors at nearby resorts taking photos and videos as black smoke obscured the sun.

“Crimea has always been an integral part of Russia in the hearts and minds of people,” Mr. Putin declared in his 2014 address marking the annexation. But his is a selective reading of history.

Over the centuries, Greeks and Romans, Goths and Huns, Mongols and Tatars have all laid claim to the land.

And perhaps no group in Crimea has watched the unfolding war with as much trepidation as the Tatars, Turkic Muslims who migrated from the Eurasian steppes in the 13th century.

They were brutally targeted by Stalin, who — in a foreshadowing of the Kremlin’s justification for its current war — accused them of being Nazi collaborators and deported them en masse. Thousands died in the process.

In 1989, Mikhail Gorbachev, the last Soviet leader, allowed Tatars to return to Crimea. And before the 2014 annexation, they made up about 12 percent of Crimea’s population, numbering about 260,000 there.

In 2017, Human Rights Watch accused Moscow of intensifying the persecution of the Tatar minority in Crimea, “with the apparent goal of completely silencing dissent on the peninsula.”

SHERMAN OAKS, Calif.--(BUSINESS WIRE)--When it comes to choosing a property management company, the size of a company often becomes a sticking point … END_OF_DOCUMENT_TOKEN_TO_BE_REPLACED

An alternative way to get Original Medicare coverage, Medicare Advantage plans offer coverage that is equal to or greater than that of Medicare Parts … END_OF_DOCUMENT_TOKEN_TO_BE_REPLACED