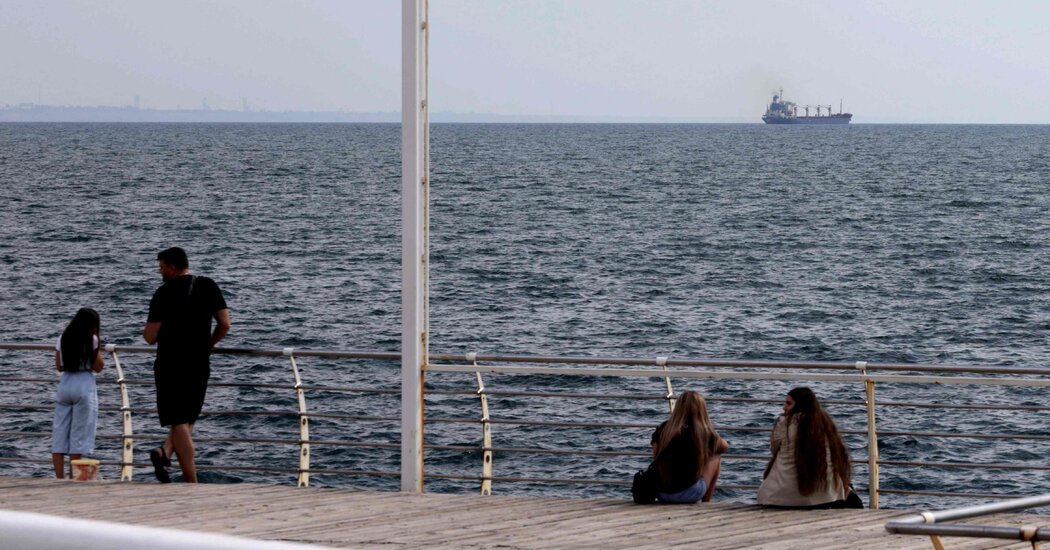 MYKOLAIV, Ukraine — A ship loaded with corn on Monday became the first cargo vessel to sail from Ukraine in more than five months of war, passing through Russia’s naval blockade of Ukraine’s Black Sea ports and raising hopes that desperately needed food will soon reach nations afflicted by shortages and soaring prices.

The ship’s journey was the culmination of months of negotiations and an international campaign to get grain out of Ukraine, one of the world’s breadbaskets before the war. Russia’s invasion and blockade, along with Western sanctions impeding Russian exports and factors like drought and climate change, have sharply cut global grain supplies, threatening to bring famine to tens of millions of people, particularly in the Middle East and Africa.

Mediators from the United Nations and Turkey, which shares the Black Sea coast with Russia and Ukraine, oversaw months of talks in Istanbul. Though discussions seemed hopelessly mired for weeks, in late July the parties struck a deal to free more than 20 million tons of grain.

the causes of a looming global hunger crisis.

“Ensuring that grain, fertilizers, and other food-related items are available at reasonable prices to developing countries is a humanitarian imperative,” António Guterres, the U.N. secretary general, said Monday. “People on the verge of famine need these agreements to work, in order to survive.”

major supplier of fertilizer, and with Ukraine it supplies more than a quarter of the world’s wheat.

But as the Razoni’s Black Sea crossing raised hopes for some degree of cooperation between the combatants, the fighting intensified on multiple fronts in Ukraine.

adept at attacking Russian command and control hubs and destroying large amounts of Russian equipment. On Monday, the Biden administration announced another round of support for Ukraine: $550 million in military aid, including more ammunition for 155-millimeter howitzer artillery pieces and High Mobility Artillery Rocket Systems, or HIMARS, that the United States has already provided.

But for all its sluggish or faltering progress in the war, Russia retains vast advantages in the size of its arsenal, and its military has shown a willingness and ability to strike all over the country, even as it focuses on gaining ground in eastern Ukraine. There, Russia has blanketed town after town with overwhelming artillery fire as it tries to reposition ground forces to press forward.

The strategy slowly gave Russia control of the eastern Luhansk Province, leaving many cities and villages in ruins. Russian forces have since moved to reinforce the south and to push into another eastern province, Donetsk.

“Their tactic remains much the same as it was during the hostilities in Luhansk region,” Serhiy Haidai, head of Ukraine’s Luhansk regional government, said on Monday.

He said the Russians were making daily attempts to mount an offensive on the city of Bakhmut, in Donetsk, but so far had failed to break through the main Ukrainian defensive lines.

Russian forces have also continued to shell residential and military areas in and around the city of Kharkiv in the northeast, putting pressure on Ukraine not to shift too many of its defenses from there.

In Chuhuiv, in the Kharkiv region and just 10 miles from Russian lines, residents were still recovering on Monday from missile strikes last week on the House of Culture, a building used since Soviet times for cultural events. In wartime, the building’s kitchens were used to prepare food for the needy, but members of the city government had also used it as a temporary office, possibly a reason for the attack.

The missiles killed three people sheltering in the basement and wounded several more, according to Oleh Synyehubov, the Kharkiv regional administrator. A volunteer cook was among the dead, residents said. His brother and several other people survived.

Two women were also killed, one of whom had been helping the cook, said a resident who gave only his first name, Maksim, wary of possible retribution. They were making an Uzbek rice dish, plov, for people in the neighborhood.

Chuhuiv has come under increasing bombardment in recent days, as have the city of Kharkiv and other villages and towns in the province. Soldiers guarding the approaches to the city on Sunday said that artillery strikes had been steady much of the day, hitting an industrial area around the train station.

The Russians “are hitting lots of places like this, all the schools as well,” said Maksim. “They are doing it to make the people leave.”

People were getting the message, and the town was largely empty, he said. He was preparing to leave too, he said. He and his family had plans to emigrate to Canada.

“There is nothing left here,” he said.

Whether you optimistically hope that mortgage rates will decline or are resigned that rates will stay elevated above the historic lows of 2021, you … END_OF_DOCUMENT_TOKEN_TO_BE_REPLACED

A resident of Nikopol, Ukraine, in her backyard last month, with smoke rising from an area on the opposite bank of the Dnipro River. Credit...David … END_OF_DOCUMENT_TOKEN_TO_BE_REPLACED