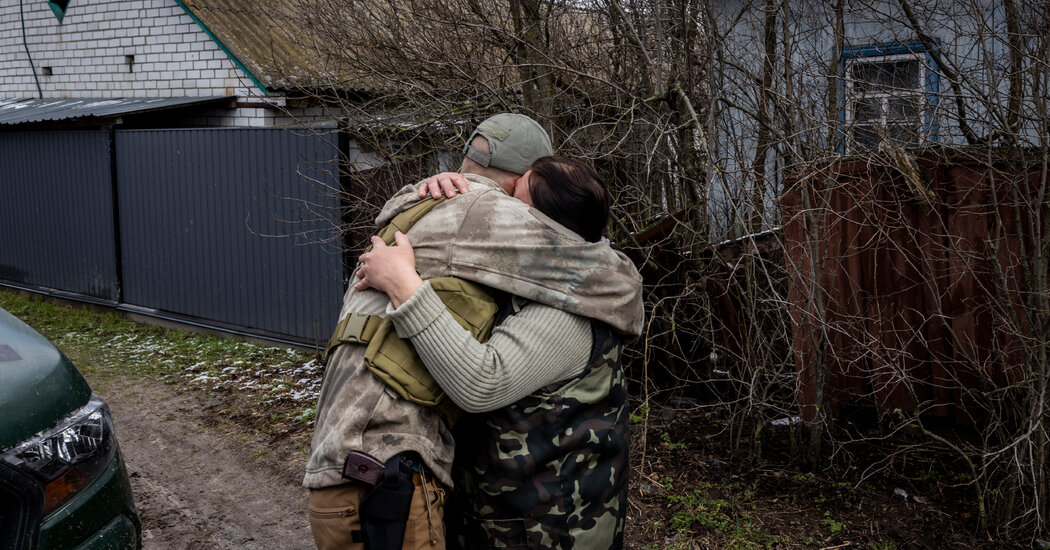 The images of dead Ukrainians, some with their hands tied and others haphazardly buried in pits, spurred shocked Western leaders on Monday to promise even tougher sanctions against Russia, including possibly on energy, as the Kremlin dug in and showed signs of preparing a new assault.

The growing evidence that Russian soldiers killed scores of civilians in the Kyiv suburb of Bucha, leaving their bodies behind as they withdrew, prompted President Biden to call for President Vladimir V. Putin to face a “war crime trial.” Germany and France expelled a total of 75 Russian diplomats, and President Emmanuel Macron of France said the European Union should consider sanctions against Russian coal and oil.

“This guy is brutal,” Mr. Biden said of Mr. Putin. “And what’s happening in Bucha is outrageous, and everyone’s seen it.”

In Moscow on Monday, Mr. Putin said nothing about his war in Ukraine, but his spokesman, Dmitri S. Peskov, said the Kremlin “categorically” denied “any allegations” of Russian involvement in the atrocities. Instead, Russia’s state media aired relentless conspiracy theories about what it said was a Ukrainian fabrication, while the authorities threatened to prosecute anyone who publicly blamed Russians for the Bucha killings.

Russia said the bodies had been placed only recently on the streets after “all Russian units withdrew completely from Bucha” around March 30. But a review of videos and satellite imagery by The New York Times shows that many of the civilians were killed more than three weeks ago, when Russia’s military was in control of the town.

The war in Ukraine may now be headed for an even more dangerous phase, despite Russia’s withdrawal last week from areas near Kyiv.

Ukrainian and Western officials said that Russia appeared to be positioning troops for an intensified assault in the eastern Donbas area, where the port city of Mariupol remains under a brutal siege. And in Kharkiv, roughly 30 miles from the Russian border, unrelenting bombardment has left parts of the city of 1.4 million unrecognizable.

The systematic destruction produces little military gain, but is part of a broader strategy to seize the country’s east, analysts and U.S. military officials say.

With the Russian economy showing some signs of resilience after the initial shock of the wide-ranging Western sanctions put in place after Mr. Putin’s invasion in February, the Kremlin appeared to be girding for a continuation of the war, despite talk in European capitals of now possibly banning Russian coal, oil or, less likely, gas.

“They are not going to stop,” Oleksiy Danilov, the secretary of the National Security and Defense Council of Ukraine, said in a statement on Monday. “Putin’s order given to his soldiers to destroy our state has not disappeared.”

In a visit to Bucha on Monday, President Volodymyr Zelensky of Ukraine left the door open to a negotiated peace, despite the horrific scenes uncovered over the weekend. In a camouflage bulletproof vest, surrounded by soldiers and journalists, Mr. Zelensky accused Russia of “genocide,” but said he was still hoping to meet with Mr. Putin to try to stop the war.

“Ukraine must have peace,” Mr. Zelensky said. “We are in Europe in the 21st century. We will continue efforts diplomatically and militarily.”

Mr. Biden, speaking to reporters in Washington after returning from Delaware, said that “information” needed to be gathered for a trial of Mr. Putin, calling the Russian leader a “war criminal.” Mr. Biden said he would at some point be announcing more sanctions against Russia, without specifying what they would be.

In Europe, the growing evidence of Russian atrocities also appeared to be paving the way for more sanctions, even as divisions remained among E.U. members of whether to impose a broad ban on Russian energy imports.

“Today there are very clear signs of war crimes,” Mr. Macron, the French president, told France Inter radio. “Those who were responsible for those crimes will have to answer for them.”

European Union ambassadors will meet on Wednesday to discuss another package of sanctions against Russia, but the extent of the new measures is still very much in flux, diplomats and officials said. A meeting of NATO defense ministers is also scheduled to take place that day.

Since the start of the conflict, European leaders, along with the United States, have pursued a strategy of putting sanctions in place a piece at a time, gradually toughening them to leave themselves more cards to play in case Russia escalates the conflict.

But the outrage over the new revelations of atrocities may force their hand.

While Mr. Macron said the new sanctions should target both coal and oil, Christian Lindner, the German finance minister, indicated that coal would be the only Russian energy export included in the sanctions package. The European Union, he said, needed to “differentiate between oil, coal and gas.”

Coal, which is largely mined by private companies in Russia, is less critical to the Kremlin’s coffers than the oil and gas industry, in which state-owned companies play the leading role.

Germany is the key country holding the bloc back from an outright ban on oil and gas, though the idea is also unpopular in other, smaller European nations that largely rely on Russian supplies. Berlin has consistently argued that sanctions against Russia ought to hurt Russia more than they hurt Europe.

Germany’s hesitation to endorse oil and gas sanctions was on display Sunday, when cracks appeared in the coalition government’s position on such a move.

Christine Lambrecht, the defense minister, said the bloc should consider banning gas imports, while the economy and energy minister, Robert Habeck said such a move would not be useful because Mr. Putin has “already practically lost the war.”

“The horrifying news from Bucha will certainly pile more pressure on the E.U. to impose energy sanctions on Moscow this Wednesday, but hard-hitting import bans on oil and gas remain unlikely for now,” said Mujtaba Rahman, managing director for Europe at Eurasia Group, a consultancy.

“Internal momentum is building over stopping Russian coal,” Mr. Rahman said, “If anything, that’s likely to be the first thing Brussels targets on the energy side.”

Mr. Rahman said that, for now, the economic and political costs of a sudden stop of Russian oil and gas imports were too high for most E.U. leaders. He said it could take Russia using chemical, biological or nuclear weapons in Ukraine to lead the E.U. to impose sanctions on oil and gas imports.

Still, the Bucha revelations did prompt Germany and France — two countries that have long been careful to avoid provoking Russia — to escalate the confrontation with Moscow.

Germany said it would expel 40 Russian diplomats, an unusually high number for a single round of expulsions that Foreign Minister Annalena Baerbock said was necessitated by the “incredible brutality on the part of the Russian leadership and those who follow its propaganda.”

France said it, too, would expel “many” Russian diplomats stationed in the country; a Foreign Ministry official put the number at 35.

And Lithuania expelled the Russian ambassador and recalled its own from Moscow, the first time that a European country has made such a move since the start of the war.

Russia promised to retaliate against the expulsions and dismissed the reports of the atrocities in Bucha, describing them as fabricated pretexts for more sanctions. State television even claimed that Western operatives had chosen Bucha for their “provocation” because the town’s name sounded like the English word “butcher.”

It was the latest instance in which the Kremlin’s media machine has tried to parry overwhelming evidence of Russian involvement in an atrocity with a flood of conspiracy theories sowing confusion among casual consumers of the news.

It appeared likely that, inside Russia, the approach would work. The Kremlin narrative is increasingly the only one being heard by regular Russians, with independent news media shut down, access to Facebook and Instagram blocked, and a new censorship law punishing any deviation from that narrative with as much as 15 years in prison.

Driving the point home, the Russian general prosecutor’s office issued a statement on Monday indicating that anyone referring to the Bucha atrocities as Russia’s doing risked prosecution.

The Seattle Seahawks are very much still in the running for Baker Mayfield. (Photo by Stacy ... [+] Revere/Getty Images) Getty Images The Seattle … END_OF_DOCUMENT_TOKEN_TO_BE_REPLACED

(CNN) — Kim Kyung-seop recalls going to cheap bars after class with his friends, where they binged on as much makgeolli as possible. "You know the … END_OF_DOCUMENT_TOKEN_TO_BE_REPLACED