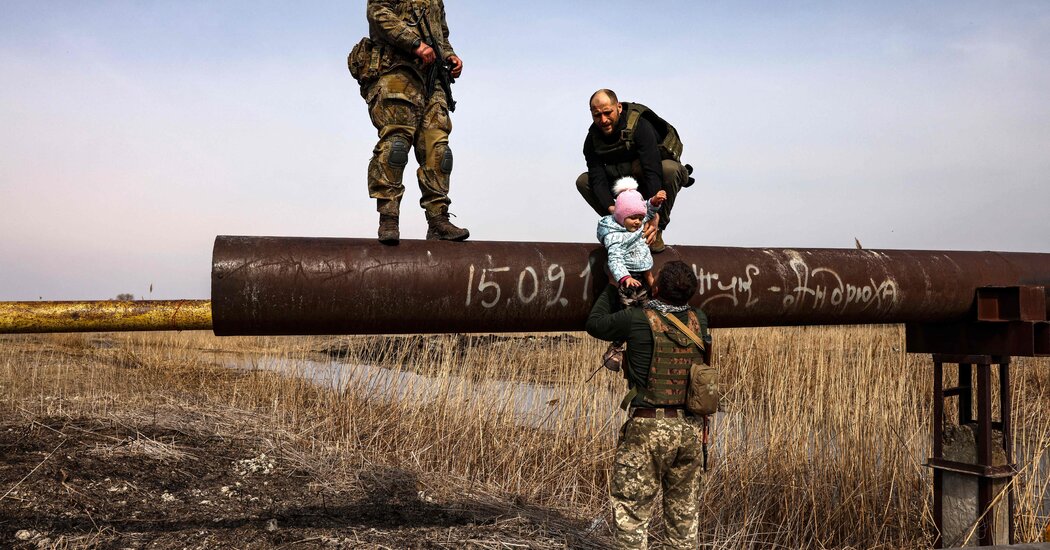 Under growing pressure to bring down high energy prices, President Biden announced on Thursday that the United States would release up to 180 million barrels of oil from a strategic reserve to counteract the economic impact of Russia’s invasion of Ukraine.

With midterm elections just months away, gasoline prices have risen nearly $1.50 a gallon over the last year, undercutting consumer confidence. And the cost of diesel, the fuel used by most farmers and shippers, has climbed even faster, threatening to push up already high inflation on all manner of goods and services.

“I know how much it hurts,” Mr. Biden said Thursday as he announced the plan. “As you’ve heard me say before, I grew up in a family like many of you where the price of a gallon gasoline went up, it was a discussion at the kitchen table.”

Mr. Biden has few tools to control commodity prices that are set on global markets, so he is turning to the Strategic Petroleum Reserve, ordering the largest release since that emergency stockpile was established in the early 1970s. But the move will most likely have a modest impact because it cannot make up for all the oil, diesel and other fuels that Russia used to sell to the world but is no longer able to.

“Our prices are rising because of Putin’s action,” Mr. Biden added, referring to President Vladimir V. Putin of Russia. “There isn’t enough supply. And the bottom line is if we want lower gas prices, we need to have more oil supply right now.”

Mr. Biden’s plan, to release one million barrels of oil a day for 180 days, would represent roughly 5 percent of American demand and 1 percent of global demand. To put that in context, Russian oil exports are down about three million barrels a day. The U.S. benchmark oil price fell about 6 percent on Thursday.

The administration’s announcement came as Russia conveyed mixed signals about its aims for the war in Ukraine, now in its sixth week. Despite Kremlin claims that it was withdrawing from the outskirts of Kyiv, the capital, fighting continued in that area on Thursday, and Western officials said they saw little evidence of a Russian pullback.

“Russia maintains pressure on Kyiv and other cities, so we can expect additional offensive actions, bringing even more suffering,” the NATO secretary general, Jens Stoltenberg, said at a news conference.

Russian officials also said they would allow a respite for greater humanitarian access to the devastated southeast port of Mariupol, once home to 400,000 people, which has come to symbolize Russia’s battlefield tactic of indiscriminate destruction. Previous agreements for pauses in fighting around Mariupol have repeatedly broken down.

Largely as a result of the ceaseless war, energy experts expect oil prices to stay high for a while without big interventions like the U.S. reserve release.

Reaction from the oil industry to Mr. Biden’s announcement was muted. The reserve has mostly been used to increase the supply of oil during wars, foreign threats to energy supplies or natural disasters. Smaller reserve releases by the Biden administration starting late last year have had little impact on the prices that drivers and businesses pay for fuel.

“It will lower the oil price a little and encourage more demand,” said Scott Sheffield, chief executive of Pioneer Natural Resources, a major Texas oil company. “But it is still a Band-Aid on a significant shortfall of supply.”

The American Petroleum Institute, which represents oil and gas companies, said Mr. Biden ought to encourage domestic oil production by reducing regulations. The reserve “was put in place to reduce the impact of significant supply chain disruptions,” said Mike Sommers, the group’s president, “and while today’s release may provide some short-term relief, it is far from a long-term solution to the economic pain Americans are feeling at the pump.”

After sinking to historically low levels during the early months of the coronavirus pandemic, oil prices have been climbing for the last year, reaching their highest levels in nearly a decade.

Oil exploration and production in the United States and elsewhere slid during the pandemic, and still has not quite recovered. American companies, under pressure from investors, have been cautious about spending too much money to drill new wells, lest prices fall again. Instead, many have been paying out larger dividends and buying back their stock.

While that calculation might make sense for individual businesses, it has caused political problems for Democrats who had hoped to reduce the use of fossil fuels to address climate change. Now, under attack from Republicans for high prices, Mr. Biden and Democrats are trying to get the oil industry to drill more.

Both sides of the political divide are eyeing the November congressional election, when inflation is expected to be a major issue.

Reacting to news of the release from the reserve, a spokesman for Representative Kevin McCarthy, the Republican leader in the House, accused the president of “attacks on American energy production in order to fulfill his campaign promise to ‘get rid of fossil fuels.’”

Mark Bednar, the spokesman, added: “As a result, the American people are paying the price, as gas is more than $4 per gallon, and we are more reliant on other countries for energy.”

But Senator Joe Manchin III, Democrat of West Virginia, welcomed the Biden announcement, saying it would “provide much-needed relief while also allowing for the simultaneous ramping up of domestic oil and gas production to backfill Russian energy resources.”

Aides to Mr. Biden are hoping to blunt Republican criticisms by taking actions to try to lower prices. In a statement about the oil release Thursday morning, the White House said that Mr. Biden was “committed to doing everything in his power to help American families who are paying more out of pocket as a result.”

They are also trying to pin some of the blame for high prices on oil companies, which the administration argues are not producing more energy to increase their profits. The administration plans to call on Congress to require companies to produce oil on more than 12 million acres of federal lands that are already permitted for extraction or pay fines, a proposal that will probably face an uphill climb.

The release is not without risk. Goldman Sachs analysts wrote in a research note that a large discharge could cause “congestion” on the Gulf Coast, keeping new oil production from fields in West Texas out of pipelines and storage tanks.

Bob McNally, who was an energy adviser to President George W. Bush, said the release was “not big enough to offset the potential loss of Russian oil exports should the conflict and sanctions pressure continue to extend.”

The oil market tends to go in cycles, so the release may allow the government to sell high and, later, buy low, potentially earning billions of dollars for the Treasury. The government will use the money it makes from oil sales to refill the reserve, which in turn could help raise prices again.

While pushing up those prices, Jason Bordoff, founding director of Columbia University’s Center on Global Energy Policy and a former aide to President Barack Obama, said an eventual refill could also “send a signal to shale producers that may help encourage them to invest in more production, which may help with today’s potential shortages.”

The U.S. reserve contains nearly 600 million barrels, approximately a month of total American consumption, and it can release up to 4.4 million barrels a day. The stockpile was established after the 1973 energy crisis, when Saudi Arabia and other Arab producers proclaimed an oil embargo.

AUSTIN, Texas--(BUSINESS WIRE)--As the first multifamily management company to be recognized in the Public Relations and Marketing Excellence Awards, … END_OF_DOCUMENT_TOKEN_TO_BE_REPLACED

There have been whispers of cooling housing and rental prices in the San Francisco Bay Area, but that hasn't yet translated into practical, noticeable … END_OF_DOCUMENT_TOKEN_TO_BE_REPLACED

Cars pass in Independence Square at twilight in Kyiv, Ukraine, Monday, Oct. 31, 2022. Rolling ... [+] blackouts are increasing across Ukraine as the … END_OF_DOCUMENT_TOKEN_TO_BE_REPLACED