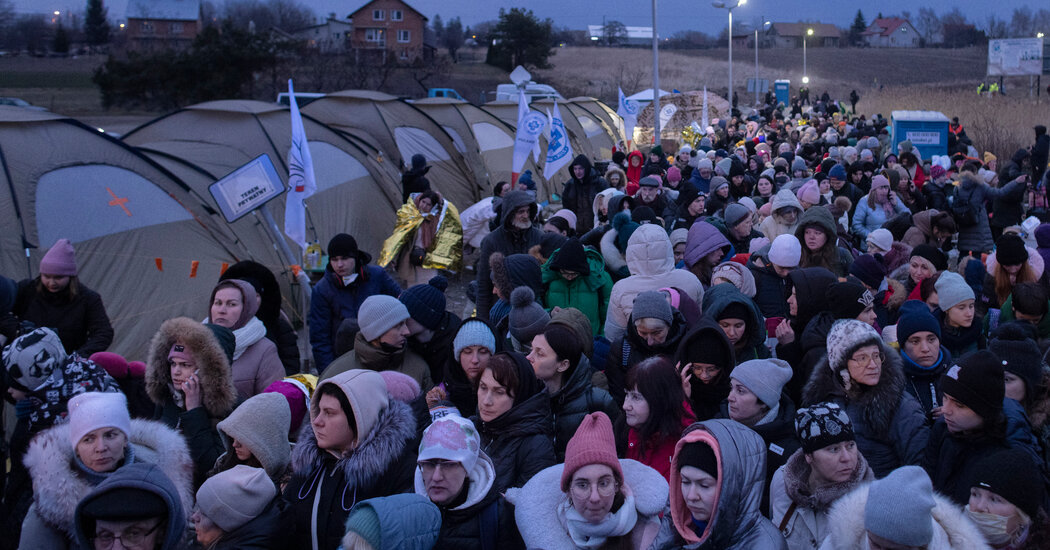 One of the paradoxical things about Vladimir V. Putin’s increasingly authoritarian rule of Russia was how relatively open society always remained.

For all the state’s control of media, people could read or watch what they wanted, including foreign newscasts like BBC and CNN. The internet was largely unfettered, a portal to the rest of the world. Unlike, say, China, you could criticize the president with some assurance that the police would not knock at the door.

As the war in Ukraine grinds on, Mr. Putin has strangled the vestiges of a free press to justify an invasion that has been almost universally condemned — and with that moved closer to the stultifying orthodoxy of the Soviet Union. The result will be to isolate the country, as Mr. Putin has isolated himself, leaving it with a one-sided view of the world no longer subject to debate.

Two of the remaining flagships of the country’s own independent media — Ekho Moskvy, the liberal radio station, and TV Dozhd, or Rain, a digital upstart — went off the air last week, hounded by the authorities for reporting accurately on Ukraine. Access to Facebook, Twitter and TikTok, platforms pulsing with opposition to Mr. Putin’s war, have been blocked, as have other online sites in Russia.

Many foreign news organizations have withdrawn correspondents or stopped reporting in Russia after Mr. Putin on Friday signed into law a measure to punish anyone spreading “false information” with up to 15 years in prison.

“Just two weeks ago it was not possible to imagine how quickly most of it would get closed,” said Nina L. Khrushcheva, a professor of international affairs at the New School in New York City. “And yet it is.”

Beyond the immediate impact on Russians’ ability to learn about the war next door, Mr. Putin seems to have crossed a threshold in the country’s history. He is sequestering Russian society to a greater extent than at any time since the last Soviet leader, Mikhail S. Gorbachev, launched a policy in 1986 called glasnost, which became known as “openness” but more precisely means “the act of giving voice.”

Access to foreign news reporting and independent voices on social media have challenged the Kremlin’s monopoly on state media — as Mr. Gorbachev’s effort broke the Soviet monopoly on truth. Independent outlets have, at great risk to reporters’ personal safety, uncovered abuses during Russia’s war in Chechnya, repression of political and human rights, and the extraordinary wealth of people close to Mr. Putin — all taboo subjects in state media.

The impact of silencing them could be much broader and last much longer than the war, pushing the country from authoritarian rule to something worse.

“Putin is trying to turn Russia back into a totalitarian dictatorship of the pre-Gorbachev days,” said Michael McFaul, the former American ambassador to Russia who is director of the Freeman Spogli Institute for International Studies at Stanford University. “He will eventually fail, but he will do great damage to Russian society in trying.”

The Kremlin’s propaganda and restrictions have already disconnected ordinary Russians from the horrific violence ravaging cities across Ukraine — even those with relatives on the ground telling them otherwise. They have covered up the Russian military’s difficulties, as well as the human costs to Ukrainians that Mr. Putin claims to be defending.

Those who watch Russian television instead see the country’s troops taking part in a largely bloodless “special military operation,” to protect Ukrainian civilians from a neo-Nazi government. In this alternate reality, Russian troops are distributing aid to civilians or helping evacuate them to safety; Ukrainians are fabricating reports about Russian military setbacks — or even shelling their own cities.

The result has been to create a blinkered view of the war that few dare pierce. Not a single deputy in the State Duma, the lower house of Parliament, voted against the bill criminalizing “fake news.”

“There is less and less access to accurate information from the West amid the relentless pounding from increasingly hysterical state propaganda, which admittedly, is having its effect,” said Sergey Radchenko, a professor at the Johns Hopkins School of Advanced International Studies Europe.

Mr. Putin was a lieutenant colonel in the K.G.B., serving in the former East Germany, when glasnost was introduced. He later said that he, too, recognized the need for the Soviet Union to become more open. Only up to a point, though.

From the start of his presidency in 2000, he understood that the media — especially television — had the power not only to shape his political image but also to help him govern. He moved quickly to regain control of the main television networks from two oligarchs, Vladimir A. Gusinsky and Boris A. Berezovsky, who championed agendas not always in line with the Kremlin.

But printed media faced less direct pressure, and the internet burst with new outlets, making Russian and foreign sources widely accessible. Independent media like Ekho Moskvy were mostly left alone, serving as quasi independent sources of news and debate, at least for the educated elite. The station was itself a child of glasnost, founded in 1990 by frustrated employees of state radio who wanted a platform for genuine political discussion.

Russians attributed the station’s survival to its savvy editor in chief, Aleksei A. Venediktov, and the Kremlin’s need for both a safety valve for liberal debate and a source of information separate from its own propaganda. It was there that opposition figures long barred from state television could give interviews, and anchors could debate the impact of Kremlin policies on regular people.

Before it closed last week, the outlet promoted voices critical of the war and of Mr. Putin himself. Russia’s prosecutor general accused it of spreading “deliberately false information.”

As in many spheres of Russian life, tolerance for contrary or unorthodox views in the media has been eroding for years. Maria Snegovaya, a visiting scholar at George Washington University and a fellow at the Center for New American Security in Washington, said there has been a “qualitative change” in Mr. Putin’s government.

She dated it to the protests that shook Mr. Putin’s ally in Belarus in 2020; the poisoning of the Kremlin’s arch critic, Aleksei A. Navalny, and his subsequent imprisonment; and the constitutional changes enacted last year allowing Mr. Putin, now 69, to extend his presidential terms to 2036.

All generated significant opposition in Russia that seeped into the public discourse, despite the Kremlin’s effort. Mr. Navalny became famous for investigations devoted to exposing corruption, including a 143-minute documentary on YouTube after his arrest that accused Mr. Putin of secretly building a palace on the Black Sea coast.

“I always refrained from calling Russia totalitarian, but I think the military situation, the war, has pushed the authorities toward that,” Ms. Snegovaya said from Bulgaria where she was assisting Russians who fled the country in recent days.

A more severe step would be creating an analog to China’s Great Firewall, which restricts access to foreign websites on the outside and strictly controls what is allowed inside. Russia calls its vision for a sovereign cyberspace the RuNet, though it has so far stopped short of imposing total control.

In today’s digitally connected world, Mr. Putin could have a difficult time cutting off Russia entirely. Even in the Soviet Union, information flowed back and forth over borders. Virtual private networks, or VPNs, that allow people to evade internet restrictions by disguising which country they are logging in from, can help spread information the way samizdat, illegal copies of censored books or articles, circulated clandestinely in Soviet times.

“It will be difficult for the Russian government to block all outside information,” Jamie Fly, the chief executive of Radio Free Europe/Radio Liberty, the U.S.-financed network founded during the Cold War, said after the announcement that it, too, was ceasing operations inside Russia. “History shows that people will go to great lengths to seek out the truth.”

Those who do so now will be a small minority. As Mr. Putin’s rule continues, critics fear he will take even stronger measures to maintain the Kremlin’s uncontested grip on power.

“We have a long way to go before we get to 1937,” Mr. Radchenko said, evoking the year of Stalin’s Great Terror, “but for the first time the road is clear. You can see far ahead, like on a cold, crisp winter morning, and there, in the distance, you can just about make out the outlines of the guillotines.”

The Seattle Seahawks are very much still in the running for Baker Mayfield. (Photo by Stacy ... [+] Revere/Getty Images) Getty Images The Seattle … END_OF_DOCUMENT_TOKEN_TO_BE_REPLACED

(CNN) — Kim Kyung-seop recalls going to cheap bars after class with his friends, where they binged on as much makgeolli as possible. "You know the … END_OF_DOCUMENT_TOKEN_TO_BE_REPLACED