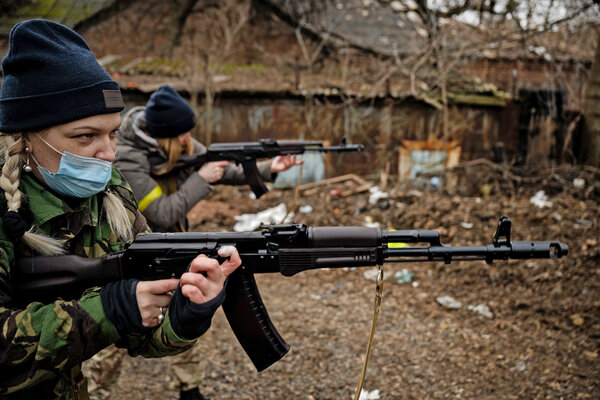 Russia clamped down harder Friday on news and free speech than at any time in President Vladimir V. Putin’s 22 years in power, blocking access to Facebook and major foreign news outlets, and enacting a law to punish anyone spreading “false information” about its Ukraine invasion with up to 15 years in prison,

The crackdown comes as the Kremlin scrambles to contain discontent over the war and to control the narrative as Russia faces its most severe economic crisis in decades as a result of this week’s crushing Western sanctions. Fearing prosecution, more independent Russian news outlets shut down on Friday, and the B.B.C. said it had suspended all of its operations in Russia.

Mr. Putin signed a law that effectively criminalizes any public opposition to or independent news reporting about the war against Ukraine. Taking effect as soon as Saturday, the law could make it a crime to simply call the war a “war” — the Kremlin says it is a “special military operation” — on social media or in a news article or broadcast. Announcements that the law was coming had already pushed Russian independent media outlets to shut down in recent days, and more followed on Friday.

In addition, the government blocked access inside Russia to the websites of major Russian-language outlets that are based outside the country, and to Facebook, the social network popular with the Westward-looking urban middle class where many have posted fierce criticism of Mr. Putin’s war.

Facebook, Russia’s internet regulator claimed, had engaged in “discrimination against Russian news media” by limiting access to pro-Kremlin accounts, including that of the Defense Ministry’s television channel. The decision was a blow to internet freedom in Russia, where Western social networks have remained accessible despite Mr. Putin’s creeping authoritarianism.

For now, popular Russian social networks like VKontakte remain accessible, along with Instagram, Twitter and YouTube. But analysts expect a further crackdown, heightening the importance of the messaging and social networking app Telegram, which the Kremlin tried and failed to block in 2018.

Russian officials claim that journalists writing critically about the war — or calling it a “war” or an “invasion” — are undermining the national interest, even referring to them as traitors.

The lower house of Parliament, the State Duma, passed the law criminalizing “false information” about the armed forces on Friday by a unanimous vote, and Mr. Putin signed it later in the day. Vyacheslav Volodin, the Duma speaker, said that under the new law, “those who lied and made declarations discrediting our armed forces will be forced to suffer very harsh punishment.”

The text of the new law offered few details about what constituted an offense, but Russian journalists and Kremlin opponents take it to mean that any contradiction of the government’s statements on the invasion could be treated as a crime. Besides criminalizing the sharing of “false information” it makes “discrediting” Russia’s use of its military in Ukraine, calling on other countries to sanction Russia or protesting Russia’s invasion of Ukraine punishable by fines and years of imprisonment.

It wasn’t immediately clear whether the law would apply to people inside Russia — such as foreign correspondents — producing content in a language other than Russian. But another senior lawmaker said that citizens of any country could be prosecuted under it, and the BBC — which has a large Russian-language service in Moscow as well as an English-language bureau — said it was halting its operations inside the country.

“This legislation appears to criminalize the process of independent journalism,” Tim Davie, the director-general of the BBC, said in a statement. “It leaves us no other option than to temporarily suspend the work of all BBC News journalists and their support staff within the Russian Federation while we assess the full implications of this unwelcome development.”

Mr. Putin was silent on those developments on Friday. Instead, he held a televised videoconference with the governor of the Kaliningrad region, a Russian exclaves sandwiched between Poland and Lithuania on the Baltic Sea, in which he tried to exude a sense of normalcy amid crisis.

“We don’t see any need to exacerbate the situation or worsen our relationships,” Mr. Putin said. “All of our actions, if they occur, they occur exclusively, always, in response to ill-intended actions toward the Russian Federation.”

Mr. Putin’s comments sounded unreal with the war in Ukraine raging, but they appeared to be a message to his domestic audience to show that he was not the one escalating tensions.

The tensions were felt this week, among others, by Russia’s community of independent journalists, who found ways to publish and broadcast content harshly critical of the Kremlin despite Mr. Putin’s authoritarianism.

On Thursday, the pillars of Russia’s independent broadcast media, the Echo of Moscow radio station and the TV Rain television channel, shut down under pressure from the state.

Then, on Friday, the government said it would block access to Russian-language media produced outside the country: the websites of the Voice of America, the BBC, Deutsche Welle, Radio Free Europe/Radio Liberty and the popular Latvian-based news outlet Meduza. The reason: the systematic distribution of what it called false information about the “special military operation on the territory of Ukraine.”

Russians will still be able to reach blocked media through the Telegram messaging app, where many news outlets have their own accounts. Some can also use virtual private networks, or VPNs, to bypass restrictions.

But independent news outlets based in Russia saw the dangers as so great that increasing numbers shut down. Znak, an independent news outlet covering Russia’s regions, shuttered its website on Friday, with a statement saying: “We are suspending our operations given the large amount of new restrictions on the functioning of the news media in Russia.”

Others tried to stay alive by telling their readers they would no longer cover the war. Russia’s last major independent newspaper, Novaya Gazeta, said it was deleting its content about the war in Ukraine. The Village, a digital lifestyle magazine that moved its operations from Russia to Poland this week, said it was retroactively editing its articles to change any mention of the word “war” to “special operation.”

Until recently, Russia’s mostly uncensored internet had provided an outlet for Russians to express dissent and to read news reports outside the Kremlin propaganda bubble that envelops much of the country’s traditional news media. But amid the war in Ukraine, which has touched off protests across the country and an outpouring of opposition from Russians online, the Kremlin appears to see the internet as a newfound threat.

Echo of Moscow, a radio station founded by Soviet dissidents in 1990 and acquired later by the state energy giant Gazprom, said on Friday that it would delete all corporate social media accounts and turn off its website as part of a “liquidation” process. By the afternoon, its popular YouTube channel was gone. More than one million people had tuned in to listen to its programs each day, according to the radio station’s longtime editor in chief, Aleksei A. Venediktov.

The situation was also a sea change for Novaya Gazeta, the 29-year-old independent newspaper that has endured the murder of six of its journalists and whose editor, Dmitri Muratov, shared the Nobel Peace Prize last year.

In an email newsletter on Friday morning, Nadezhda Prusenkova, one of the newspaper’s journalists, wrote that it was hard to see many routes for the publication to continue to exist.

“I don’t know what happens next,” she wrote.

AUSTIN, Texas--(BUSINESS WIRE)--As the first multifamily management company to be recognized in the Public Relations and Marketing Excellence Awards, … END_OF_DOCUMENT_TOKEN_TO_BE_REPLACED

There have been whispers of cooling housing and rental prices in the San Francisco Bay Area, but that hasn't yet translated into practical, noticeable … END_OF_DOCUMENT_TOKEN_TO_BE_REPLACED

Cars pass in Independence Square at twilight in Kyiv, Ukraine, Monday, Oct. 31, 2022. Rolling ... [+] blackouts are increasing across Ukraine as the … END_OF_DOCUMENT_TOKEN_TO_BE_REPLACED