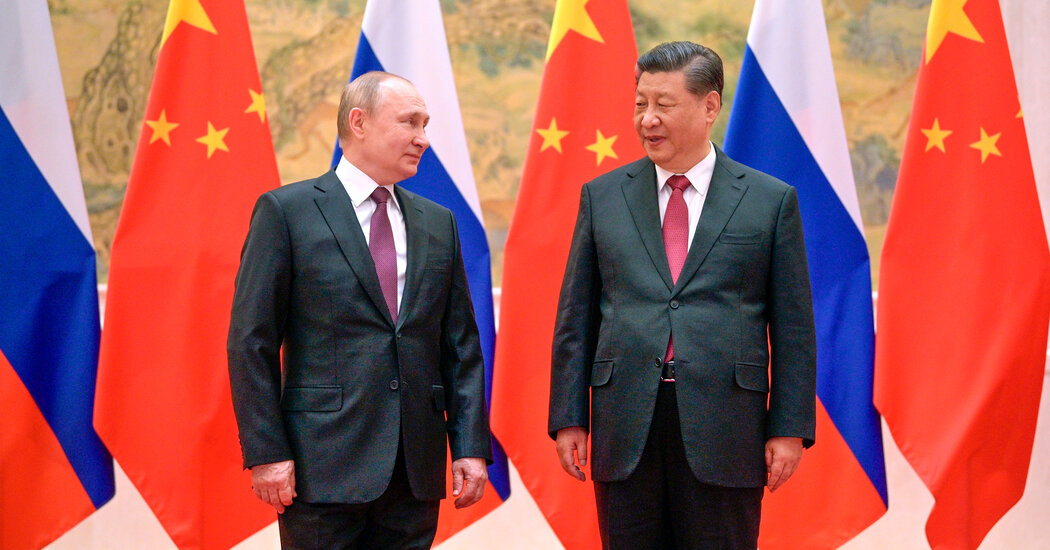 YAVORIV, Ukraine — With television cameras rolling, a Ukrainian soldier heaved an America-made missile launcher onto his shoulder and pressed a red button. The missile streaked out and blew a target — a pile of tires — to smithereens.

For the more than two months after Russia began its military buildup near Ukraine last fall, the United States was quiet about its military aid to Kyiv, merely acknowledging sending arms that had been scheduled for delivery long ago.

That has changed now. American cargo planes bringing weaponry and ammunition are arriving openly at Kyiv’s Borispol airport. And the Ukrainian army is making a point of showing media these newly delivered weapons at a military training area.

In the last two weeks, seven U.S. cargo planes carrying a total of about 585 tons of military assistance have landed in Kyiv. After the latest plane arrived, on Thursday, Ukraine’s defense minister, Oleksiy Reznikov, posted on Twitter, “this is not the end! To be continued!”

Along with ammunition for small arms, the planes also delivered a significant number of missiles to Ukraine. These include Javelin anti-tank missiles, which the United States has been providing to Ukraine since 2018.

It also included a type of American-made, shoulder-launched missile that can blow up sandbagged fortifications and destroy partially buried bunkers. On Friday, Ukrainian soldiers fired 10 of the so-called “bunker busters” for international media, including a Japanese television crew.

To critics of the policy of arming Ukraine, this weapon seems provocative. Within Ukraine, nearly half the respondents to an opinion poll published on Wednesday said they believed Western weaponry will deter Russia, but a third said they thought it would do the opposite — provoke an attack. The Russian government has objected to the weapons transfers, and Germany is staunchly opposed to them.

“I do not think it’s realistic to believe such weapons exports could turn around the military imbalance,” Annalena Baerbock, Germany’s foreign minister, said on a visit to Kyiv on Monday.

Ukraine’s policy of publicly displaying the new weaponry adds to their value as a deterrent, said Maria Zolkina, a political analyst at Democratic Initiatives Foundation. The media events, she said, will help “destroy the myth that an unprotected Ukraine as an easy catch for Russia.”

“The stronger Ukraine is the lower are the risks of further Russian aggression,” he said in a video conference with journalists this week. “The more defensive weapons we get today the less likely we will need to use them.”

The United States is not the only country that has been arming Ukraine in the airlifts that began last month. The United Kingdom sent about 2,000 light anti-tank missiles. With approval from the United States, the Baltic countries of Latvia, Lithuania and Estonia said they would transfer Stinger antiaircraft missiles, filling gaps in Ukraine’s weak air defenses. Poland has also said it will send antiaircraft missiles.

At the demonstration firing of the American bunker busters, only Ukrainian soldiers handled the weapon. They had been through a three-day course taught by instructors from the 53d Infantry Brigade of the Florida National Guard. The Americans stood aside, declining to appear on camera.

The launching tube and missile weigh about 15 pounds and look like a small, green log. When a missile was fired, the whooshing noise rattled dishes on a picnic table set up to provide snacks for the visiting journalists. Ukrainian soldiers cheered when missiles hit the targets of tires and exploded in a red flash.

“It’s very simple, just a gadget,” said Ivan, a 25-year-old Ukrainian senior sergeant, now trained in firing the new missile, who declined to give his last name for security reasons. The soldiers also covered their faces with balaclavas to protect their identities.

But the training itself was simple, Ivan said. “A boy or a girl of any age can fire it. It’s like an iPhone.”

Lil Wayne has just listed his modern megamansion in Miami Beach for an equally mega sum of $29.5 million.The rapper (whose legal name is Dwayne … END_OF_DOCUMENT_TOKEN_TO_BE_REPLACED