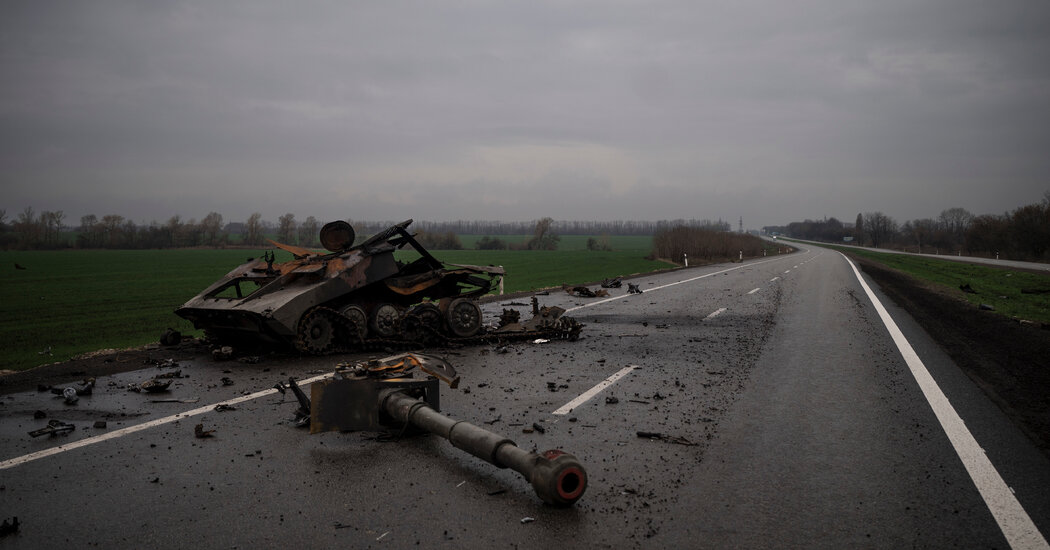 President Vladimir V. Putin of Russia said on Tuesday that peace talks with Ukraine had reached a “dead end” and he falsely called the evidence of Russian atrocities in a Kyiv suburb “fake,” using his first extended remarks about the war in nearly a month to insist that Russia would persist in its invasion.

Speaking at a news conference at a newly built spaceport in Russia’s Far East, Mr. Putin said that Ukraine’s negotiating position at the talks, last held in Istanbul two weeks ago, was unacceptable. He pledged that Russia’s “military operation will continue until its full completion.”

But the operation’s goals, he said, centered on the Donbas region in eastern Ukraine, where pro-Russia separatists have been fighting since 2014. It was the first time that Mr. Putin himself had effectively defined a more limited aim for the war, focusing on control of the Donbas — and not all of Ukraine, which Mr. Putin and his subordinates have said should not even be an independent country.

“We will act rhythmically and calmly, according to the plan that was initially proposed by the general staff,” Mr. Putin said. “Our goal is to help the people who live in the Donbas, who feel their unbreakable bond with Russia.”

Just over a month ago, by contrast, Mr. Putin warned that Ukraine’s leaders risked “the future of Ukrainian statehood” by resisting the Russian invasion, which Kremlin military planners appeared to have mistakenly thought could be achieved with relative ease.

Still, Mr. Putin’s assertion of Russia’s more limited war aims in Ukraine cannot necessarily be taken at face value, and he may yet harbor an ultimate goal of taking control of the former Soviet republic. For months leading up to the Feb. 24 invasion, as Russian forces massed on Ukraine’s border, Russian officials insisted there were no plans to invade and that the buildup was merely a military exercise.

Ukrainian and Western officials have said they expect that Russia, having failed to seize the capital Kyiv and most other key cities in an invasion hampered by poor logistics, would soon mount an intense offensive in the Donbas, where the Russian military has been pouring in troops.

But almost seven weeks into the war, the Russians have yet to conquer Mariupol, the strategically important southern Donbas port that has come to symbolize the death and destruction wrought by the invaders so far. Western officials said they were evaluating unverified accounts that Russian forces may have dropped chemical weapons on a Mariupol steel mill that has become a bastion of Ukrainian army resistance. The use of chemical weapons is a war crime.

President Volodymyr Zelensky of Ukraine, referring to the unverified accounts from Mariupol, said he took them “as seriously as possible.”

“Even during the Second World War, the Donbas did not see such cruelty in such a short period of time,” Mr. Zelensky said in a video released early Wednesday. “And from who? From Russian troops.”

Russian forces also have repeatedly fired missiles and artillery indiscriminately at civilian targets they have little or no hope of taking, including those in and around the eastern city of Kharkiv, Ukraine’s second largest. On Tuesday, New York Times journalists witnessed the aftermath of a Russian cluster munitions attack on a Kharkiv suburb that left a trail of casualties, craters and punctured roofs.

And the outside pressure on Mr. Putin continued to rise. On Tuesday evening, Ukraine’s security service said it had detained Viktor Medvedchuk, a pro-Russian oligarch and politician who is Mr. Putin’s closest ally in Ukraine, releasing a photo of him handcuffed and disheveled. President Biden took a new swipe at Mr. Putin, calling him a “dictator” who has committed “genocide,” and a U.S. official said the White House would soon announce new military assistance for Ukraine worth $750 million.

Mr. Putin’s appearance on Tuesday — coming after several weeks in which the public glimpsed the Russian leader mainly in Kremlin footage showing him holding meetings by videoconference — appeared intended to shore up domestic support for a war with no clear end in sight.

Marking Cosmonauts’ Day — the anniversary of the Soviet Cold War triumph in which Yuri Gagarin became the first man in space — Mr. Putin used the new spaceport, the Vostochny Cosmodrome, as his stage.

He was accompanied to the spaceport by President Aleksandr G. Lukashenko of Belarus, Mr. Putin’s closest ally, an apparent reminder to Russians that they were not completely isolated in the war.

Mr. Putin parried a question from a Russian journalist about the atrocities in the Kyiv suburb of Bucha by retreating into his familiar arguments about Western “double standards.” He claimed that the world had been silent when the United States bombed Syria in the campaign against the Islamic State, and that Mr. Lukashenko had provided evidence that the scenes in Bucha were an orchestrated, British “provocation.”

“We discussed in detail this psychological special operation that the English carried out,” Mr. Lukashenko said in a news conference alongside Mr. Putin, referring to Bucha.

In fact, independent investigators, including journalists for The New York Times, have documented evidence of numerous execution-style killings, rapes and acts of torture against civilians in Bucha that had been carried out by Russian occupation troops before they retreated last month.

But inside Russia, Mr. Putin’s pronouncements are going increasingly unchallenged, with access to Facebook and Instagram and many independent news websites blocked, and a draconian wartime censorship law punishing any deviation from the Kremlin line with as much as 15 years in prison. While prices are rising and layoffs loom as Western companies pull out of Russia, there has been no sign yet of widespread public discontent, and pollsters see significant public support for the war.

It was the alliance of Western countries, Mr. Putin insisted, that would soon feel the political backlash from the economic pain wrought by the sanctions, as evidenced by rising prices for food and fuel. European countries, in particular, had shown yet again that they were collectively acting as a “poodle” of the United States, he said.

Ever since he appeared before tens of thousands at a Moscow stadium on March 18, Mr. Putin’s public appearances have been limited to brief clips showing him meeting with government officials, mostly by video link, in which he does not comment on the peace talks or the war. Instead, he lets his Defense Ministry and other officials do the talking.

Mr. Putin emerged from his cocoon on Monday for an off-camera meeting at his residence outside Moscow with Chancellor Karl Nehammer of Austria, the first Western leader to visit with him since the Feb. 24 invasion. Mr. Nehammer said the session left him convinced that Mr. Putin was planning a large and violent military assault on the Donbas.

On Tuesday, Mr. Putin arrived in the Amur Region of Russia’s Far East and was shown in video released by the Kremlin chatting informally with workers at the Vostochny Cosmodrome, a sprawling facility that has been plagued by construction delays and remains unfinished.

While a key initial thrust of Russia’s invasion ended in a retreat, Mr. Putin insisted on Tuesday — as he did in the first weeks of the war — that the plan for what he calls the “special military operation” had not been altered. And he argued that what he called the West’s economic “blitzkrieg” to humble Russia had failed, pointing back to Soviet achievements in the space race as evidence that Russians could thrive despite sanctions.

Mr. Putin said Russia would move ahead with its lunar program, which includes a moon lander scheduled to be launched this year. And in a nod to Belarus’s status as Russia’s key ally in the war, Mr. Putin promised to send a Belarusian cosmonaut into space as early as next year.

“We are not going to isolate ourselves, and it is generally impossible to isolate anyone in the modern world, and most certainly not as huge a country as Russia,” Mr. Putin said.

Mr. Putin offered no hint on Tuesday that he was prepared to make peace before assaulting Ukrainian troops in the Donbas, which Western officials fear could be the most violent phase of the war so far. He insisted, as he has before, that Russia had no choice but to invade, alleging that the West was turning the country into an “anti-Russian bridgehead.”

“What is happening in Ukraine is a tragedy,” Mr. Putin said. “They just didn’t leave us a choice. There was no choice.”

Reporting was contributed by Thomas Gibbons-Neff and Natalia Yermak from Babai, Ukraine; Ivan Nechepurenko from Istanbul; Marc Santora from Warsaw; and Shashank Bengali and Megan Specia from London.

America is absorbing the shock of another bloody mass shooting, a day after an 18-year-old man wearing body armour and carrying assault rifles entered … END_OF_DOCUMENT_TOKEN_TO_BE_REPLACED

Once home to baseball Hall of Famer Ty Cobb, this estate rests on the eastern shores of Lake Tahoe. Now, 1472 Flowers Ave. is on the market asking … END_OF_DOCUMENT_TOKEN_TO_BE_REPLACED