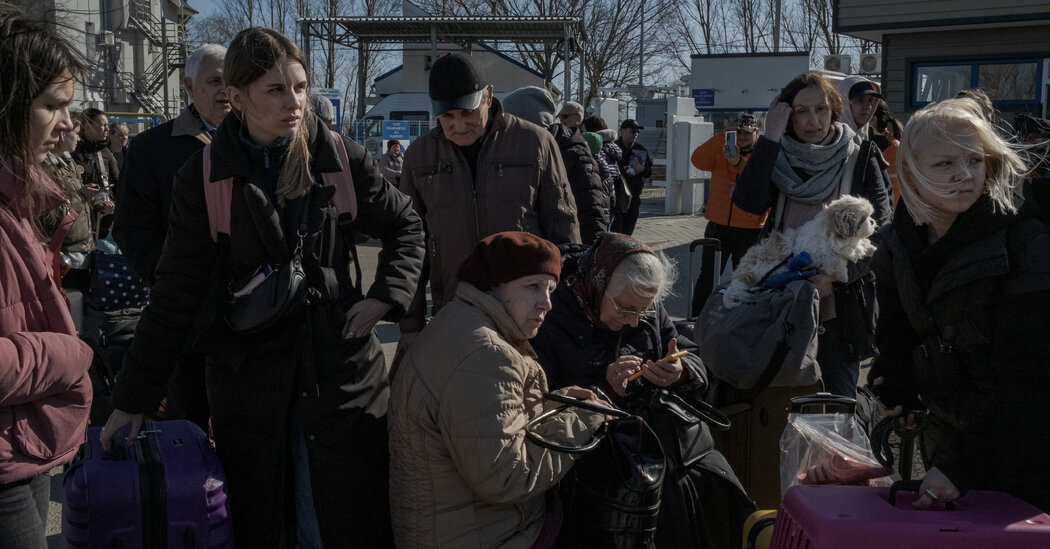 WASHINGTON — When the Cold War ended, governments and companies believed that stronger global economic ties would lead to greater stability. But the Ukraine war and the pandemic are pushing the world in the opposite direction and upending those ideas.

Important parts of the integrated economy are unwinding. American and European officials are now using sanctions to sever major parts of the Russian economy — the 11th largest in the world — from global commerce, and hundreds of Western companies have halted operations in Russia on their own. Amid the pandemic, companies are reorganizing how they obtain their goods because of soaring costs and unpredictable delays in global supply chains.

Western officials and executives are also rethinking how they do business with China, the world’s second-largest economy, as geopolitical tensions and the Chinese Communist Party’s human rights abuses and use of advanced technology to reinforce autocratic control make corporate dealings more fraught.

The moves reverse core tenets of post-Cold War economic and foreign policies forged by the United States and its allies that were even adopted by rivals like Russia and China.

“Does globalization and economic interdependence reduce conflict?” he added. “I think the answer is yes, until it doesn’t.”

Opposition to globalization gained momentum with the Trump administration’s trade policies and “America First” drive, and as the progressive left became more powerful. But the pandemic and President Vladimir V. Putin’s invasion of Ukraine have brought into sharp relief the uncertainty of the existing economic order.

President Biden warned President Xi Jinping of China on Friday that there would be “consequences” if Beijing gave material aid to Russia for the war in Ukraine, an implicit threat of sanctions. China has criticized sanctions on Russia, and Le Yucheng, the vice foreign minister, said in a speech on Saturday that “globalization should not be weaponized.” Yet China increasingly has imposed economic punishments — Lithuania, Norway, Australia, Japan and South Korea have been among the targets.

The result of all the disruptions may well be a fracturing of the world into economic blocs, as countries and companies gravitate to ideological corners with distinct markets and pools of labor, as they did in much of the 20th century.

Mr. Biden already frames his foreign policy in ideological terms, as a mission of unifying democracies against autocracies. Mr. Biden also says he is enacting a foreign policy for middle-class Americans, and central to that is getting companies to move critical supply chains and manufacturing out of China.

The goal is given urgency by the hobbling of those global links over two years of the pandemic, which has brought about a realization among the world’s most powerful companies that they need to focus on not just efficiency and cost, but also resiliency. This month, lockdowns China imposed to contain Covid-19 outbreaks have once again threatened to stall global supply chains.

The economic impact of such a change is highly uncertain. The emergence of new economic blocs could accelerate a massive reorganization in financial flows and supply chains, potentially slowing growth, leading to some shortages and raising prices for consumers in the short term. But the longer-term effects on global growth, worker wages and supplies of goods are harder to assess.

The war has set in motion “deglobalization forces that could have profound and unpredictable effects,” said Laurence Boone, the chief economist of the Organization for Economic Cooperation and Development.

For decades, executives have pushed for globalization to expand their markets and to exploit cheap labor and lax environmental standards. China especially has benefited from this, while Russia profits from its exports of minerals and energy. They tap into enormous economies: The Group of 7 industrialized nations make up more than 50 percent of the global economy, while China and Russia together account for about 20 percent.

Trade and business ties between the United States and China are still robust, despite steadily worsening relations. But with the new Western sanctions on Russia, many nations that are not staunch partners of America are now more aware of the perils of being economically tied to the United States and its allies.

If Mr. Xi and Mr. Putin organize their own economic coalition, they could bring in other nations seeking to shield themselves from Western sanctions — a tool that all recent U.S. presidents have used.

“Your interdependence can be weaponized against you,” said Dani Rodrik, a professor of international political economy at Harvard Kennedy School. “That’s a lesson that I imagine many countries are beginning to internalize.”

The Ukraine war, he added, has “probably put a nail in the coffin of hyperglobalization.”

China and, increasingly, Russia have taken steps to wall off their societies, including erecting strict censorship mechanisms on their internet networks, which have cut off their citizens from foreign perspectives and some commerce. China is on a drive to make critical industries self-sufficient, including for technologies like semiconductors.

And China has been in talks with Saudi Arabia to pay for some oil purchases in China’s currency, the renminbi, The Wall Street Journal reported; Russia was in similar discussions with India. The efforts show a desire by those governments to move away from dollar-based transactions, a foundation of American global economic power.

For decades, prominent U.S. officials and strategists asserted that a globalized economy was a pillar of what they call the rules-based international order, and that trade and financial ties would prevent major powers from going to war. The United States helped usher China into the World Trade Organization in 2001 in a bid to bring its economic behavior — and, some officials hoped, its political system — more in line with the West. Russia joined the organization in 2012.

But Mr. Putin’s war and China’s recent aggressive actions in Asia have challenged those notions.

“The whole idea of the liberal international order was that economic interdependence would prevent conflict of this kind,” said Alina Polyakova, president of the Center for European Policy Analysis, a research group in Washington. “If you tie yourselves to each other, which was the European model after the Second World War, the disincentives would be so painful if you went to war that no one in their right mind would do it. Well, we’ve seen now that has proven to be false.”

The United States and its partners have blocked Russia from much of the international financial system by banning transactions with the Russian central bank. They have also cut Russia off from the global bank messaging system called SWIFT, frozen the assets of Russian leaders and oligarchs, and banned the export from the United States and other nations of advanced technology to Russia. Russia has answered with its own export bans on food, cars and timber.

The penalties can lead to odd decouplings: British and European sanctions on Roman Abramovich, the Russian oligarch who owns the Chelsea soccer team in Britain, prevent the club from selling tickets or merchandise.

About 400 companies have chosen to suspend or withdraw operations from Russia, including iconic brands of global consumerism such as Apple, Ikea and Rolex.

While many countries remain dependent on Russian energy exports, governments are strategizing how to wean themselves. Washington and London have announced plans to end imports of Russian oil.

The outstanding question is whether any of the U.S.-led penalties would one day be extended to China, which is a far bigger and more integral part of the global economy than Russia.

Even outside the Ukraine war, Mr. Biden has continued many Trump administration policies aimed at delinking parts of the American economy from that of China and punishing Beijing for its commercial practices.

Officials have kept the tariffs imposed by Mr. Trump, which covered about two-thirds of Chinese imports. The Treasury Department has continued to impose investment bans on Chinese companies with ties to the country’s military. And in June, a law will go into effect in the United States barring many goods made in whole or in part in the region of Xinjiang.

Despite all that, demand for Chinese-made goods has surged through the pandemic, as Americans splurge on online purchases. The overall U.S. trade deficit soared to record levels last year, pushed up by a widening deficit with China, and foreign investments into China actually accelerated last year.

But those economic ties will be further strained if U.S.-China relations worsen, and especially if China gives substantial aid to Russia.

Besides recent warnings to China from Mr. Biden and Secretary of State Antony J. Blinken, Commerce Secretary Gina Raimondo has said her agency would ban the sale of critical American technology to Chinese companies if China tried to supply forbidden technology to Russia.

In the meantime, the uncertainty has left the U.S.-China relationship in flux. While many major Chinese banks and private companies have suspended their interactions with Russia to comply with sanctions, foreign asset managers appear to have also begun moving their money out of China in recent weeks, possibly in anticipation of sanctions.

Mary Lovely, a senior fellow at the Peterson Institute for International Economics, said she did not expect China to “throw all in” with Russia, but that the war could still strain economic ties by worsening U.S.-China relations.

“Right now, there is great uncertainty as to how the U.S. and China will respond to the challenges posed by Russia’s increasingly urgent need for assistance,” she said. “That policy uncertainty is another push to multinationals who were already rethinking supply chains.”

AUSTIN, Texas--(BUSINESS WIRE)--As the first multifamily management company to be recognized in the Public Relations and Marketing Excellence Awards, … END_OF_DOCUMENT_TOKEN_TO_BE_REPLACED

There have been whispers of cooling housing and rental prices in the San Francisco Bay Area, but that hasn't yet translated into practical, noticeable … END_OF_DOCUMENT_TOKEN_TO_BE_REPLACED

Cars pass in Independence Square at twilight in Kyiv, Ukraine, Monday, Oct. 31, 2022. Rolling ... [+] blackouts are increasing across Ukraine as the … END_OF_DOCUMENT_TOKEN_TO_BE_REPLACED