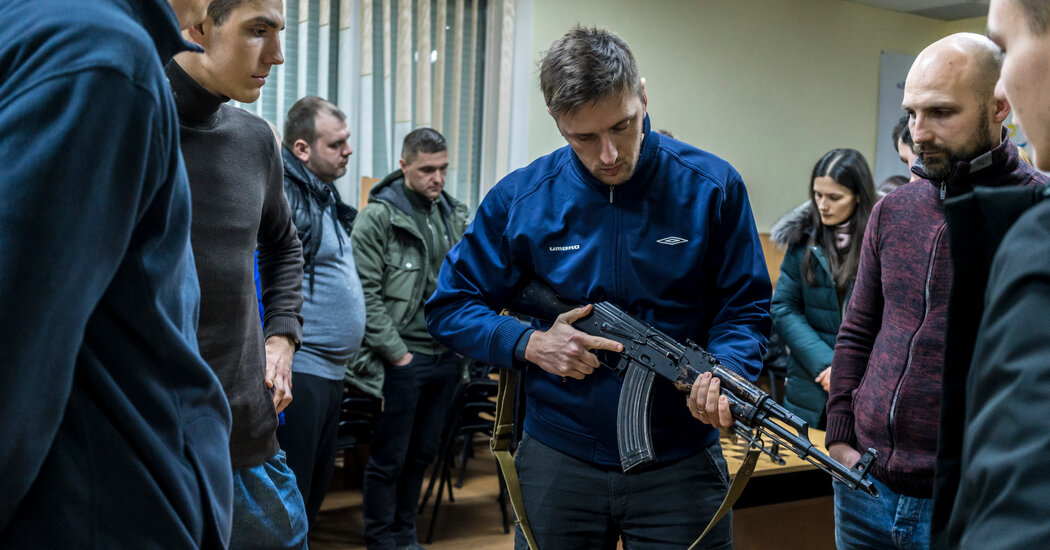 LVIV, Ukraine — Russian forces stepped up their campaign of bombardments aimed at devastating Ukraine’s cities and towns on Saturday, as the White House announced it was sending an additional $200 million in arms and equipment to help Ukraine, defying Moscow.

Soldiers fought street-by-street battles in a leafy suburb of Kyiv, the nation’s capital, and some residents wept as they dragged belongings across a destroyed bridge, trying to escape the violence. Russian forces detained the mayor of a captured city, an act that prompted hundreds of outraged residents to pour into the streets in protest.

President Volodymyr Zelensky of Ukraine accused Moscow of terrorizing the country in an attempt to break the will of the people. “A war of annihilation,” he called it.

He said an estimated 1,300 Ukrainian soldiers had been killed in the war, the first time the government had offered the number of its own soldiers killed.

Mr. Zelensky denounced what he called the kidnapping of the mayor — who had refused to cooperate with Russian troops after they seized his city — as “a new stage of terror, when they are trying to physically eliminate representatives of the legitimate local Ukrainian authorities.”

Russian forces have not achieved a major military victory since the first days of the invasion more than two weeks ago, and the assaults reinforced Moscow’s strategic turn toward increasingly indiscriminate shelling of civilian targets.

The American announcement of more arms for Ukraine’s military, including missiles for taking out warplanes and tanks, came just hours after Russia warned that convoys used for the “thoughtless transfer” of weapons to Ukraine would be “legitimate targets” for Russian forces.

Unable to mount a quick takeover of the country by air, land and sea, Russian troops have deployed missiles, rockets and bombs to destroy apartment buildings, schools, factories and hospitals, increasing civilian carnage and suffering, and leading more than 2.5 million people to flee the country.

The suffering has been particularly devastating in the besieged city of Mariupol, which is experiencing “the worst humanitarian catastrophe on the planet,” according to Ukraine’s foreign minister, Dmytro Kuleba.

At least 1,582 civilians have died since the Russian siege of Mariupol began 12 days ago, he said, and residents are struggling to survive and have been forced to bury the dead in mass graves.

“There is no drinking water and any medication for more than one week, maybe even 10 days,” a staff member who works for Doctors Without Borders in Mariupol said in an audio recording released by the organization on Saturday.

“We saw people who died because of lack of medication, and there are a lot of such people inside Mariupol,” the staff member said.

During a 90-minute call with President Vladimir V. Putin of Russia, Chancellor Olaf Scholz of Germany and President Emmanuel Macron of France urged Mr. Putin to accept an immediate cease-fire, according to the French government, which described the talks as “frank” and “difficult.”

France said that Mr. Putin showed no willingness to stop the war, and said he “placed the responsibility for the conflict on Ukraine” and sounded “determined to attain his objectives.”

In its summary of the call, the Kremlin said Mr. Putin had discussed “several matters relating to agreements being drafted to meet the well-known Russian demands,” but did not specify those demands.

In the coming weeks, NATO, which has vowed to defend allied countries from any incursion by Russian forces, plans to gather 30,000 troops from 25 countries in Europe and North America in Norway to conduct live-fire drills and other cold-weather military exercises.

The exercises, which Norway hosts biannually, were announced more than eight months ago, NATO said, and are not linked to Russia’s invasion of Ukraine, which NATO said it was responding to with “preventive, proportionate and non-escalatory measures.”

But the training has taken on greater significance as Russia steps up its bombardment of Ukrainian population centers.

Around Kyiv, the capital, Russian forces have advanced into the suburbs but have been slowed by Ukrainian troops that have counterattacked with ambushes on armored columns. On Saturday, artillery fire intensified around Kyiv, with a low rumble heard in most parts of the city.

By Saturday, there were no indications of further efforts by the Russian army to move armored columns closer to the capital. Instead, soldiers appeared to be fighting for control of the towns along the highways that encircle it.

In Irpin, about three miles from Kyiv city limits, Ukrainian and Russian soldiers were fighting a street-by-street battle on Saturday, turning what was a quiet suburb just two weeks ago into a suburban battleground.

“We are trying to push them back but we don’t control the town,” said Vitaly, a Ukrainian soldier who asked that his last name not be published for security reasons.

He had taken up a position outside what would once have been an unlikely spot for combat: a gas station mini-market, its windows blown out by shelling, on the city’s western edge. Irpin is his hometown, and he joined the volunteer forces called the Territorial Defense Forces to try to protect it just two weeks ago.

But the situation was fluid. Ukrainian soldiers had a “little island” around a shopping center near the city center, he said, but otherwise it wasn’t always clear who was where.

In the southern city of Mykolaiv, residents awoke on Saturday morning to the sounds of a fierce battle hours after Russian shells hit several civilian areas, damaging a cancer hospital and sending residents fleeing into bomb shelters.

The early-morning fight was concentrated in the north of the city, said Col. Sviatoslav Stetsenko of the Ukrainian Army’s 59th Brigade, who was stationed near the front lines.

“They are changing their tactics,” Vitaliy Kim, the governor of the Mykolaiv region, said. “They are deploying in the villages and lodging in village schools and homes. We cannot shoot back. There are no rules now. We will have to be more brutal with them.”

For nearly two weeks, Russian forces have been trying to surround Mykolaiv and cross the Southern Buh River, which flows through the city and is a natural defense against a Russian push toward the west and Odessa, the Black Sea port that appears to be a prime Russian objective.

Russian forces had not crossed the river as of Saturday morning, Colonel Stetsenko said, but “they are continuing to shell Mykolaiv.”

In Melitopol, Russian troops on Friday forced a hood over the mayor’s head and dragged him from a government building, according to Ukrainian officials, prompting hundreds of residents to demonstrate in the streets.

“Return the mayor!” the protesters shouted, according to witnesses and videos. “Free the mayor!”

But nearly as soon as the demonstrators gathered, Russian military personnel moved to shut them down, arresting a woman who they said had organized the protest, according to two witnesses and the woman’s Facebook account.

The episode was part of what Ukrainian officials said was an escalating pattern of intimidation and repression. It also illustrated a problem that Russia is likely to face even if it manages to pummel cities and towns into submission: In at least some of the few cities and towns that Russia has managed to seize — mostly in the south and east — they are facing popular unrest and revolt.

Mr. Zelensky sought to tap into public rage in an address to the nation overnight.

“The whole country saw that Melitopol did not surrender to the invaders,” he said. “Just as Kherson, Berdyansk and other cities where Russian troops managed to enter didn’t.” He said that popular resistance “will not be changed by putting pressure on mayors or kidnapping mayors.”

Melitopol’s mayor, Ivan Fyodorov, had remained stubbornly defiant even after Russian soldiers took over the city after a fierce assault on the first day of the invasion. “We are not cooperating with the Russians in any way,” he had said.

Last weekend, with Mr. Fyodorov’s encouragement, people waving Ukrainian flags took to the streets of Melitopol and other occupied cities. For the most part, Russian soldiers stood aside, even as protesters commandeered a Russian armored vehicle in one town and drove it through the streets.

While the protests in Melitopol were quickly put down, the Ukrainian government renewed efforts to bring aid to Mariupol, dispatching dozens of buses with food and medicine, Ukrainian officials said.

Similar relief efforts had failed in recent days as fighting raged around the city and land mines pocked roads in the area. In an overnight address, Mr. Zelensky said that the inability to bring aid to the city showed that Russian troops “continue to torture our people, our Mariupol residents.”

MUSCATINE, Iowa--(BUSINESS WIRE)--HNI Corporation (NYSE: HNI) announced today its Board of Directors declared a quarterly dividend of 32 cents per … END_OF_DOCUMENT_TOKEN_TO_BE_REPLACED

If you’re superstitious, today is your day.That's because it's Friday the 13th (the only one of the year, in fact). It's a day when bad juju reigns … END_OF_DOCUMENT_TOKEN_TO_BE_REPLACED

CHARLOTTE, NORTH CAROLINA - OCTOBER 20: Chris Duarte #3 of the Indiana Pacers defends Gordon Hayward ... [+] #20 of the Charlotte Hornets during their … END_OF_DOCUMENT_TOKEN_TO_BE_REPLACED