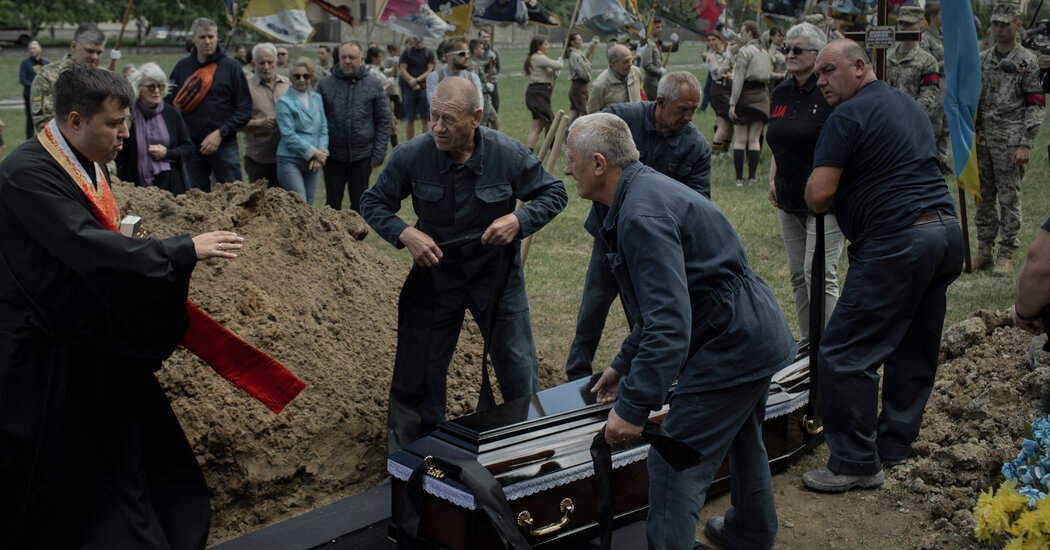 WASHINGTON — Attorney General Merrick B. Garland said during a surprise trip to Ukraine on Tuesday that a veteran prosecutor known for investigating former Nazis would lead American efforts in tracking Russian war criminals.

Mr. Garland’s visit, part of scheduled stops in Poland and Paris this week, was intended to bolster U.S. and international support in helping Ukraine identify, apprehend and prosecute Russians involved in war crimes and other atrocities.

His overseas travel comes at a particularly tense moment in his tenure at the Justice Department, on a day of dramatic congressional testimony about the Jan. 6 attack on the Capitol that prompted many Democrats to renew their call for him to prosecute former President Donald J. Trump and his allies.

Mr. Garland met for an hour with Ukraine’s prosecutor general, Iryna Venediktova, in the village of Krakovets, about a mile from the border with Poland, to discuss the technical, forensic and legal support that the United States could provide, department officials said.

“The United States is sending an unmistakable message” to those who have committed atrocities, Mr. Garland said: “There is no place to hide.”

“We will pursue every avenue available to make sure that those who are responsible for these atrocities are held accountable,” he added.

After the meeting, Mr. Garland said he was tapping Eli Rosenbaum, the former director of the Justice Department’s Office of Special Investigations, to create a war crimes accountability team that would work with Ukraine and international law enforcement groups.

Mr. Rosenbaum, 67, is best known for his work for the World Jewish Congress in the 1980s investigating the hidden history of Kurt Waldheim, a former United Nations secretary general whose army unit was implicated in war crimes against Jews and Yugoslavian partisans during World War II.

His work, during a 36-year career in the department, and in stints outside government, earned him the nickname “Nazi hunter” from historians, a sobriquet he dislikes.

In the department’s criminal division, Mr. Rosenbaum has also been instrumental in the prosecution and deportation of Nazis living in the United States and Jews who committed atrocities against their own people in concentration camps. In recent years, his portfolio has taken on a broader mission, as former Nazis die off, and now includes a wider array of human rights cases, at home and abroad.

The new team will include Justice Department staff members and outside experts. In addition to offering assistance to Ukrainian officials, the department said in a statement that Mr. Rosenbaum would investigate “potential war crimes over which the U.S. possesses jurisdiction, such as the killing and wounding of U.S. journalists covering the unprovoked Russian aggression in Ukraine.”

This line of work is, in a sense, part of Mr. Rosenbaum’s family business. His father, Irving, escaped Dresden in 1938, the year of the Kristallnacht attacks against Germany’s Jewish population, joined the U.S. Army, eventually served in an intelligence unit that interrogated German soldiers — and collected information at the Dachau concentration camp.

Mr. Rosenbaum was set to retire before Mr. Garland asked him about a week ago to lead the new unit. He agreed immediately, according to a senior Justice Department official with knowledge of the exchange.

The department is also assigning additional personnel to expand its work with Ukraine and other partners to counter Russian use of illicit financial methods to evade international sanctions — detailing a Justice Department expert to advise Ukraine on fighting kleptocracy, corruption and money laundering, officials said.

“We will pursue every avenue available to make sure that those who are responsible for these atrocities are held accountable,” added Mr. Garland, whose own family immigrated to the United States after fleeing antisemitic pogroms in Eastern Europe in the early 1900s.

After stopping in Poland, Mr. Garland flew on to Paris, where he was scheduled to join the homeland security secretary, Alejandro Mayorkas, in a series of bilateral meetings with European counterparts to discuss efforts to combat terrorism and carry out a strategy of holding Russia accountable for its brutal invasion of Ukraine.

Mr. Garland and Ms. Venediktova last met in May in Washington.

In April, Mr. Garland and the F.B.I. director, Christopher A. Wray, said they would work with investigators and prosecutors in Ukraine, a signal that the Biden administration intended to follow through on its public condemnation of atrocities committed by Russian forces that have been documented during the war.

His team has also been working with the State Department to provide logistical support and advice to Ms. Venediktova and the leaders of other ministries in Ukraine.

“We’ve seen and have determined that a number of war crimes have been committed by Russia’s forces,” Beth Van Schaack, the State Department’s ambassador at large for global criminal justice, said at a briefing in Washington last week.

“What we are seeing is not the results of a rogue unit,” she added, “but rather a pattern and practice across all the areas in which Russia’s forces are engaged.”

AUSTIN, Texas--(BUSINESS WIRE)--As the first multifamily management company to be recognized in the Public Relations and Marketing Excellence Awards, … END_OF_DOCUMENT_TOKEN_TO_BE_REPLACED

There have been whispers of cooling housing and rental prices in the San Francisco Bay Area, but that hasn't yet translated into practical, noticeable … END_OF_DOCUMENT_TOKEN_TO_BE_REPLACED

Cars pass in Independence Square at twilight in Kyiv, Ukraine, Monday, Oct. 31, 2022. Rolling ... [+] blackouts are increasing across Ukraine as the … END_OF_DOCUMENT_TOKEN_TO_BE_REPLACED