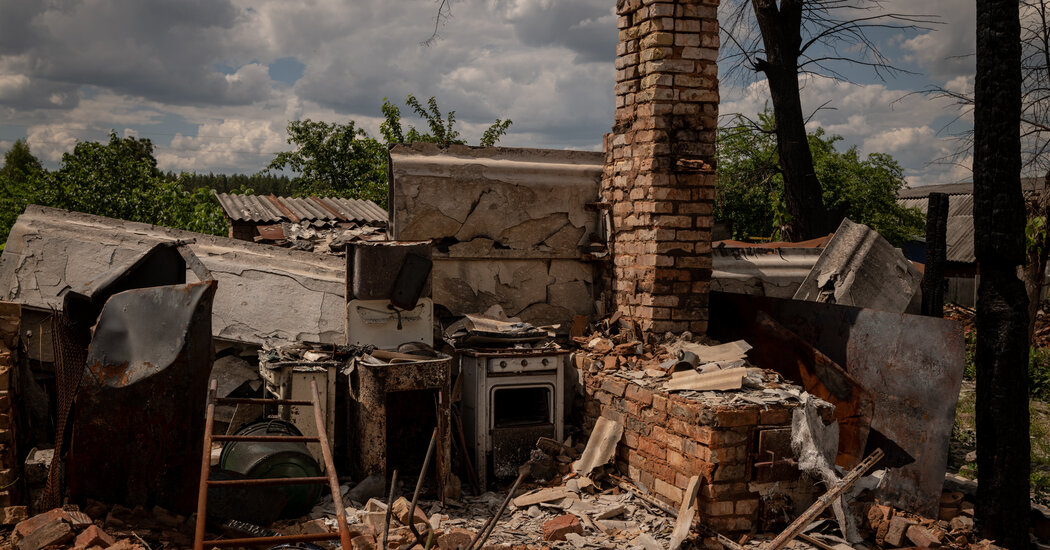 Speaking to the press after his meetings with European leaders on Thursday, President Volodymyr Zelensky praised the support they showed for Ukraine’s candidacy to join the European Union but said more immediate military aid would be needed to stand against Russia.

“The very course of European history has proved the correctness of the E.U.’s positive response to Ukraine’s aspirations,” he said. It will, he said, “strengthen freedom in Europe and become one of the key European decisions of the first third of the 21st century.”

At the same time, he appealed again for more heavy weapons, especially for the battlefields in eastern Ukraine.

“We expect new supplies, especially heavy weapons, modern rocket artillery and missile defense systems,” he said. “Each batch of supplies saves people’s lives. And every day of delays or postponed decisions is an opportunity for the Russian military to kill Ukrainians.”

Talks, he said, will not end the war. “We touched on the theme of diplomatic efforts of various countries to achieve peace,” he said. “Everybody sees the only obstacle to all these efforts is the unreadiness of the Russian Federation for real actions, for real negotiations.”

In his nightly address, Mr. Zelensky said that the meeting was a “big step,” and thanked the leaders of Italy, Romania, France and Germany for their defense aid. Mr. Zelensky also said that Romania, which shares a border with Ukraine, would assist Ukraine in the transit of its goods, including exporting grain.

Before the visit, an adviser to Mr. Zelensky said far more weaponry would be needed to turn the tide in battles in the east. Ukraine will need 1,000 howitzers, 500 tanks and 300 rocket artillery systems, the aide said.

A sense of disappointment was palpable among Ukrainian commentators and even some officials in Mr. Zelensky’s government on Thursday over perceived attempts in Europe to push Ukraine toward negotiations with Russia at this stage.

Viktor Andrusiv, an adviser to the interior minister, posted on social media that “Macron, Scholz and Draghi are bringing us candidacy for the E.U. and a request to return to the negotiating process with Putin.”

The European Commission is expected to unveil its official recommendation on Ukraine’s application to become a member of the European Union on Friday and, officials say, it is likely to recommend that the nation be granted candidate status.

Still, though overshadowed now by war, the expected acceptance of Ukraine’s application to join the bloc was widely celebrated as a breakthrough for Ukraine, even though the process of joining the bloc is arduous and can take as long as a decade.

To join, a country must also make its political system, judiciary and economy compatible with the bloc by adopting the E.U.’s system of common law, as well as more than 80,000 pages of rules and regulations.

Nevertheless, the desire to link Ukraine more closely to Europe was the issue that animated street protesters who toppled a pro-Russian president eight years ago.

And the prospect of eventually joining would help rally Ukrainians today by signaling a postwar future within the European Union and an end to perceptions of Ukraine as a security buffer zone with Russia, Oleksiy Honcharenko, a member of Parliament, said in an interview.

“It’s a psychological weapon to demonstrate that Ukraine has a future,” he said.

On a landlocked street corner at the entrance to the South Street Seaport stands a shabby, rust-streaked old lighthouse, its lantern dark, dwarfed by … END_OF_DOCUMENT_TOKEN_TO_BE_REPLACED

Kohl's announced Friday that it is terminating talks to sell its business, saying that retail environment has significantly deteriorated since the … END_OF_DOCUMENT_TOKEN_TO_BE_REPLACED