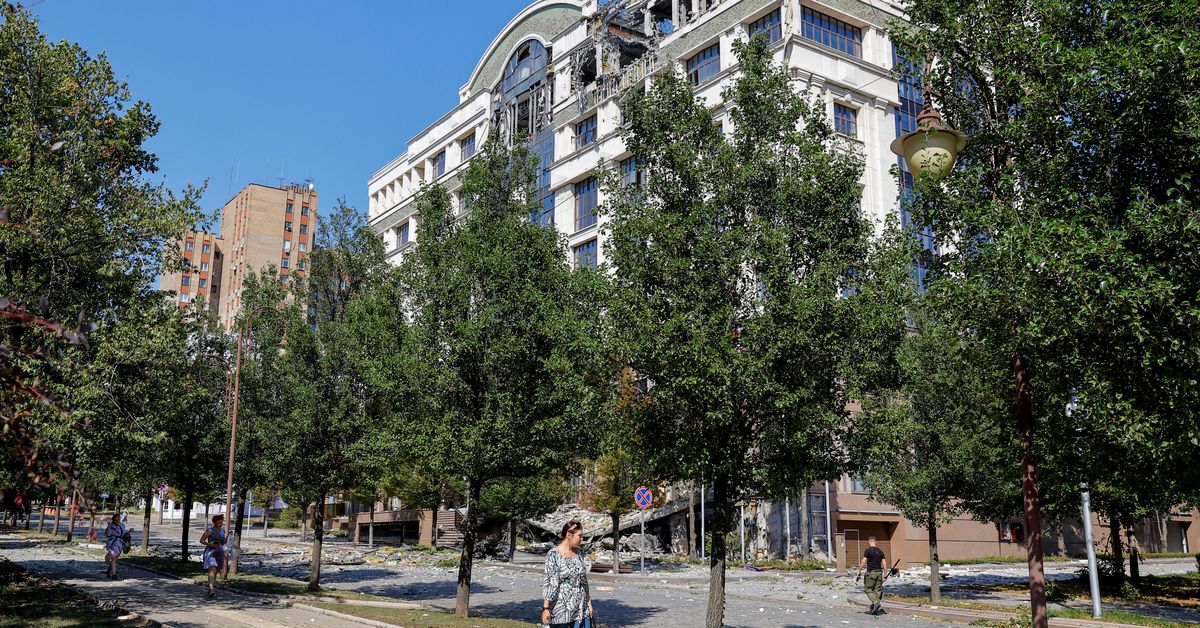 FILE PHOTO – People walk past the office building of the head of the self-proclaimed Donetsk People’s Republic, which was damaged by recent shelling in the course of Ukraine-Russia conflict in Donetsk, Ukraine, August 23, 2022. REUTERS/Alexander Ermochenko

KYIV, Aug 26 (Reuters) – Ukraine plans to expand the number of districts on the war’s front lines where civilian evacuations will be mandatory, as those areas could be occupied and face central heating problems this winter, a deputy prime minister said on Friday.

The Ukrainian government launched a campaign of mandatory evacuations in July for people in the eastern Donetsk region that it began implementing this month.

Ukrainian-controlled districts and towns in the industrial east are under constant shelling from Russia and its proxies. read more

“If they stay there, people will suffer, especially children,” Iryna Vereshchuk said on national television, announcing the campaign’s expansion.

She said evacuating women with children and elderly people would be a priority from some districts of the eastern Kharkiv region and the southern Zaporizhzhia and Mykolaiv regions.

“I’m not talking about the entire regions, but some parts will require mandatory evacuation and we are preparing for it,” said Vereshchuk.

She urged residents not to resist, adding they also faced the threat of Russian occupation.

“I know very well what the enemy can do to force people to collaborate. That’s why I call on people to evacuate so often and not to hope for the enemy to show mercy and… to follow international humanitarian law. This will not happen,” she said.

Russia denies deliberately targeting civilians in an invasion that it refers to as a “special military operation” and that Ukraine and its Western allies consider a colonial-style power-grab.

Soon after Herschel Walker, the former football star, announced he would run for U.S. Senate in Georgia as a Republican, his son Christian appeared … END_OF_DOCUMENT_TOKEN_TO_BE_REPLACED

SpaceX launched four people to the International Space Station from Florida on Wednesday, as Elon Musk's company keeps up a steady pace of crewed … END_OF_DOCUMENT_TOKEN_TO_BE_REPLACED