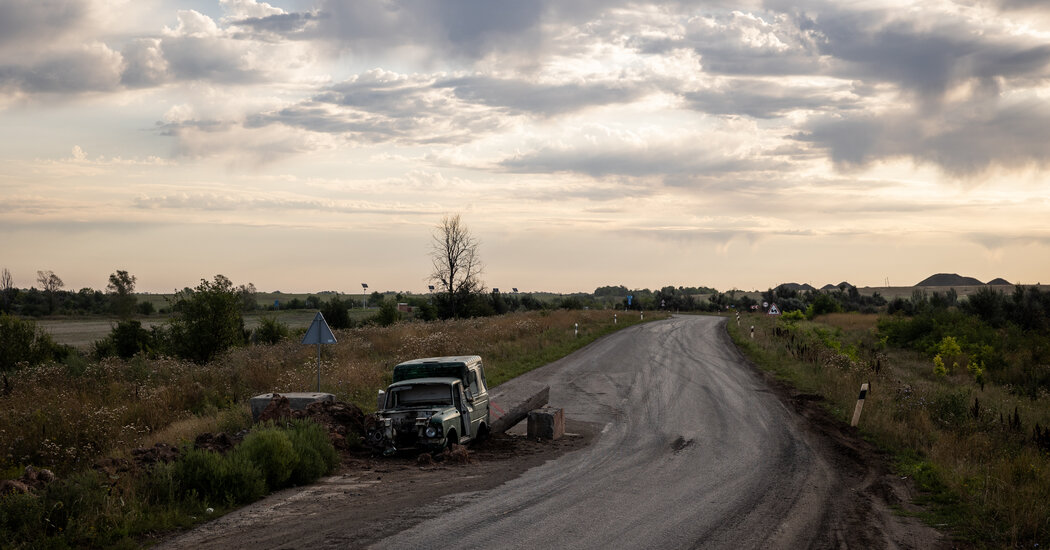 CHASIV YAR, Ukraine — On a clear spring morning eight years ago, Oleksandr Khainus stepped outside his house to go to work at the town factory when he spotted new graffiti scrawled across his fence. “Glory to Russia,” vandals had written in angry black spray paint. “Putin,” another message said.

Mr. Khainus was perplexed. It was true that Chasiv Yar, the Rust Belt-like town where he has spent his entire life in a region called the Donbas, had long contained many conflicting opinions on its identity. Geographically, the Donbas was part of Ukraine, no question, but it was so close to Russia and so tied to it historically that many maintained that their true home really lay eastward.

“It was the type of stuff you’d argue about over the dinner table,” he said. “But nothing that anyone would get violent over.”

the most far-reaching war in generations. It was the Donbas that became Mr. Putin’s pretext for a full-scale invasion of Ukraine. And now it is heating up again.

masterful offensive in the Kharkiv region, in Ukraine’s northeast, where town after town fell without a shot. Now they are heading south. Columns of dark green military trucks and American-made rocket launchers are thundering down the long, straight highways into the Donbas. But they will have a much harder fight on their hands.

Wagner Group and close air cover because of the proximity to the Russian border. They can also rely on separatist fighters and a well-financed network of citizen-spies who relay secret information to the invaders, often with devastating consequences.

Viktor Yanukovych, Ukraine’s pro-Russia president, out of office. Mr. Yanukovych came from a Donbas steel town. In one stroke, Russia lost its ally and the Donbas elite its godfather. That is when the trouble started.

People flooded into the Donbas streets waving Russian flags. At first, said Alisa Sopova, a journalist for a Donbas newspaper at the time, “We were sure they were fake people brought in from Russia to pose for Russian TV.”

to speak so much Russian. A critical aspect of Ukrainian independence was reviving the Ukrainian language, marginalized during Soviet times. But those arguments were typically confined to social media posts or intellectual debates, until this moment.

“I’d go into the supermarket to buy some meat, and the shopkeeper tells me, ‘If you don’t speak Ukrainian, I’m not going to sell you any meat,’” Mr. Tsyhankov said. “I’ve been speaking Russian my whole life. How do you think that made me feel?”

done something similar in 2008 in South Ossetia and Abkhazia, two regions of Georgia, and before that the Russians had meddled in Moldova, backing the breakaway Transnistria region. The tools were generally the same: bankrolling pro-Russia political parties; deploying intelligence agents to foment protests; sowing disinformation through Russian TV.

Mr. Putin’s strategy was to turn strategic slices of the former Soviet Union into separatist hotbeds to hobble young nations like Georgia, Moldova and Ukraine, all struggling to break free from Moscow and move closer to Europe.

Under the Kremlin’s wing, Donbas’s separatists killed Ukrainian officials, took territory and declared the breakaway Donetsk People’s Republic and Luhansk People’s Republic. When Ukrainian forces rolled in to quell the rebellion, some residents saw them as occupiers. They spoke a different language, hailed from a different region, embraced a different culture — or so went the pro-Russia narrative. In some villages, babushkas lay down in the roads blocking Ukrainian tanks, officers said, and in one, an especially cunning babushka kept stealing the soldiers’ helmets.

“It was frustrating,” said Anatolii Mohyla, a Ukrainian military commander. “We’d come to liberate them and they’d give us the finger.”

Mr. Putin dispatched thousands of Russian troops to support the separatists, later saying he had been “forced to protect” the Russian-speaking population. Towns like Chasiv Yar were occupied by separatist fighters, then liberated by Ukrainian troops a few months later. By 2015, the heavy fighting had died down. But it was not like Mr. Putin forgot about the Donbas.

He upped the ante in 2021, saying, “Kyiv simply does not need the Donbas.” And on Feb. 21 of this year, three days before he invaded Ukraine, Mr. Putin accused the Ukrainian government of perpetrating a “genocide.” He justified the most cataclysmic war in decades by citing the very tensions he himself stoked.

In early April, the agricultural land around Chasiv Yar began to thaw. Mr. Khainus, the pro-Ukraine farmer, drove out to check a sunflower field. A Ukrainian military vehicle raced up. A soldier leaned out the window and fired an assault rifle, the bullets skipping up in the dirt. Mr. Khainus slammed on the brakes.

A Ukrainian commander he recognized, a man whom Mr. Khainus said he had complained about before, jumped out. The commander greeted him with a punch to the head, Mr. Khainus said, and then smashed him in the face with a rifle butt.

He does not remember much after that. He shared photographs of himself lying in a hospital bed with two black eyes. Military and law enforcement officials declined to comment.

Mr. Khainus remains a supporter of the military, saying, “One stupid person doesn’t represent the army.”

At 9 p.m. on July 9, four cruise missiles slammed into a dormitory at the old ceramic plant. The buildings crumbled as if they were made out of sand. Viacheslav Boitsov, an emergency services official, said there were “no military facilities nearby.”

But according to Mr. Mohyla and Oleksandr Nevydomskyi, another Ukrainian military officer, Ukrainian soldiers were staying in that building. The night before, they said, a mysterious man was seen standing outside flashing light signals, most likely pinpointing the position.

The military calls such spies “correctors,” and they relay navigational information to the Russians to make missile and artillery strikes more precise. Ukrainian officials have arrested more than 20 and say correctors are often paid several hundred dollars after a target is hit. The strike in Chasiv Yar was one of the deadliest: 48 killed, including 18 soldiers, the officers said.

“For sure there are Russian agents in this town,” Mr. Mohyla said. “There might even be spies in our unit.”

Few in Chasiv Yar are confident that the town will stay in government hands.

Mr. Khainus said the Russians were steadily moving closer to his sunflower fields. About a week ago, a friend’s house was shelled. A day later, in an online messaging channel, separatist supporters said Mr. Khainus should be next, calling him a “hero” — adding an epithet.

Mr. Tsyhankov, the retired dump truck driver nostalgic for the Soviet times, seemed pained by all of the bloodshed but did not blame the Russians or the separatists. “They’re doing the right thing,” he said. “They’re fighting for the Russian language and their territory.”

As he said goodbye, insisting that his guests take with them a jug of his homemade apple juice and some fresh green grapes, he shook his head at the enormity of it. “Why can’t we be friends with you guys, the Americans?” he asked. “Politics are keeping all of us hostage.”

Every night, the horizon in Chasiv Yar lights up with explosions. Ukrainian soldiers operate here almost as if they are on enemy territory, hiving themselves off from the public, watching their backs, traveling by night in long convoys of cars with the lights blacked out, the drivers wearing night vision goggles. According to separatist messaging channels, the Wagner mercenaries have reached the outskirts of Bakhmut, a major Donbas town. As for Soledar, it is now off limits to journalists, but volunteers there trying to rescue civilians say it is as deadly as ever.

Now it is destroyed, depopulated, sad and empty.

“It’s like the Rust Belt,” Ms. Sopova said. “It’s not needed anymore. All that industry is obsolete.”

Countless communities have risen in the Donbas. Many are now falling. Ms. Sopova glimpses a perhaps not so faraway future where the Donbas goes back to what it once was: a wild field.

SHERMAN OAKS, Calif.--(BUSINESS WIRE)--When it comes to choosing a property management company, the size of a company often becomes a sticking point … END_OF_DOCUMENT_TOKEN_TO_BE_REPLACED

An alternative way to get Original Medicare coverage, Medicare Advantage plans offer coverage that is equal to or greater than that of Medicare Parts … END_OF_DOCUMENT_TOKEN_TO_BE_REPLACED